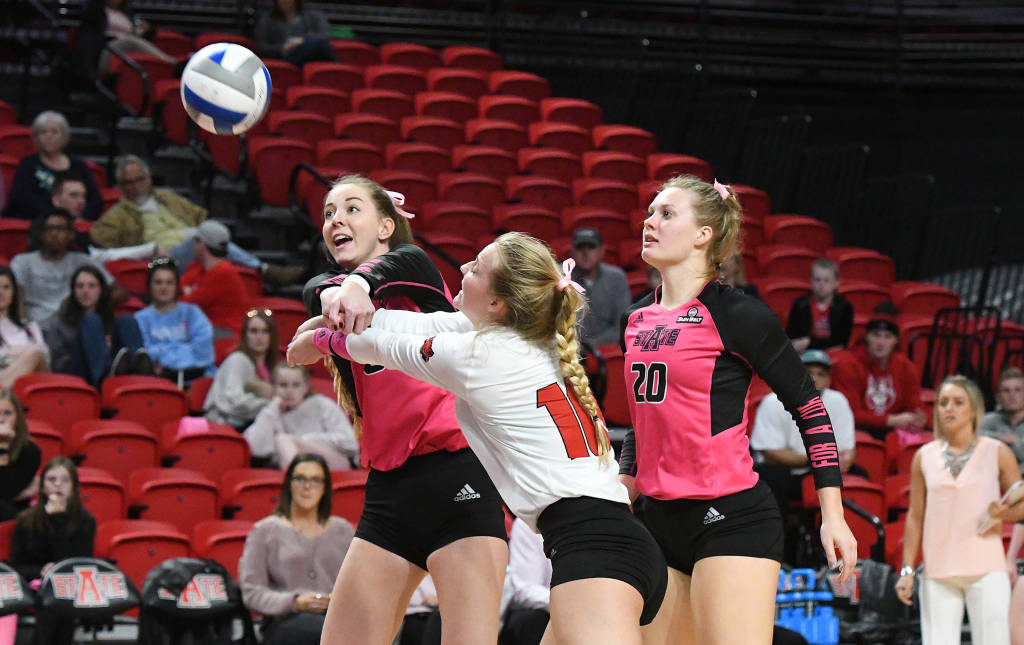 • This season is the 44th year of volleyball at A-State and the home team has an all-time mark of 1,037-
529-5 (.658) and had the 19th most wins in Division I and was tied for the 25th best winning percentage
in Division I history entering the 2018 campaign.
• Arkansas State enters the weekend after suffering a 3-2 loss against Sun Belt opponent Little Rock. In the
match, Carlisa May posted a team-hifh 24 kills while Macey putt followed with 14. The squad earned 61
kills on the night. Ellie Watkins handed out 49 assists while Kenzie Fields paced the Red Wolves defense
with a career-high 28 digs.
• Senior Carlisa May moved into second-place on A-State’s all-time career kills list, surpassing Beth
Cochran’s mark of 1636 kills from 1996-99. May currently stands at 1,705 kills and could catch all-time
leader Margie Kolat (1991-94) who has 1,789 kills.
• May currently ranks sixth in the nation with 384 kills on the year, while also checking in at 11th in the
nation with 4.74 kills per set.
• Among active players in all of Division I volleyball, May ranks second with her career kills total, and ranks
fifth among active players across all divisions.
• Ellie Watkins ranks 40th in the nation, and third in the Sun Belt, with 823 total assists on the season.
• She is also 72nd in the nation with 10.29 assists per set.
• As a team the Red Wolves rank 60th in Division I with 1,091 total kills coming into the weekend.
• Senior setter Ellie Watkins has quickly become one of the school’s most dominant setters and could break
into the school’s all-time career sets list in just her two seasons at A-State. Watkins currently has 1,699
career assists and could surpass Tistan Erford’s mark of 1,840 career assists before the end of the season.

• The Red Wolves lead the all-time series with the Panthers by a count of 10-0 with eight of those nine
meetings occurring over the last four seasons after the Panthers joined the Sun Belt Conference in 2013.
• A-State and Georgia State played for the first time in the 1989 season at the UAB Lady Blazer Classic
in Birmingham, Ala., with Arkansas State earning a 3-0 victory over the Panthers. They played again in
1990 with A-State earning a 3-0 win in Atlanta, Ga.
• The Red Wolves and Panthers have been Sun Belt Conference foes for the last eight meetings. A-State
began conference play in 2013 with a 3-2 win over the Panthers in Jonesboro before claiming a 3-1
victory later in the season in Atlanta. The Red Wolves also won both meetings in 2014 with A- State
earning a sweep at home before chalking up a 3-1 triumph on the road later in the year. The two squads
only met once in 2015 with the Red Wolves claiming a 3-0 sweep in Atlanta, Ga., Nov. 6.
• In 2016 the two teams met twice with the first meeting occurring on Oct. 29 in Atlanta, Ga., with A-State
earning a 3-0 victory over the Panthers. Carlisa May led the team with nine kills, while Kelsey Reis tallied
eight on an .800 hitting percentage. Markie Schadig picked up 23 digs, while Shelby Holmes recorded six
blocks. The two teams met in the first round of the SBC Tournament in Arlington, Texas on Nov. 18 with
the Red Wolves claiming a 3-0 sweep. The win was head coach David Rehr’s 500th career win and he
improved to 7-0 all-time against Georgia State. May led the team with 10 kills, while Kenzie Fields had
nine and led the team with 12 digs.
• Last season the teams met once on Oct. 27 at First National Bank Arena, the Red Wolves won the match
3-0 (25-14,25-18,25-17) holding the Panthers to a .063 hitting percentage. With the victory, coach Rehr
improved to 8-0 all-time against Georgia State.
• Georgia State enters the weekend with a 5-15 overall record and 2-8 in league action. The Panthers two
conference their two wins came from UTA (3-1) and Troy (3-1). A-State and Georgia State didn’t share
any common non-conference opponents.

• Arkansas State holds a 7-1 advantage all-time against Georgia Southern, with all eight meetings occurring
during the 2013 season or later.
• The first meeting was in the 2013 Magnolia Invitational in Oxford, Miss., in a nonconference contest
with the Eagles claiming their only win of the series by a score of 3-1. Georgia Southern finished the
season 28-6 and earned a berth in the NCAA Tournament.
• The two teams are now conference foes and A-State has earned six straight victories over the Eagles
with 3-1 wins in both meetings during the 2014 season. A-State claimed 3-0 sweeps in all three contests
two seasons ago, including a 3-0 win in the first round of the 2015 SBC Tournament at Hanner Fieldhouse
in Statesboro.
• In 2017 the Red Wolves and Eagles met once with A-State winning 3-0 on Oct. 28, in Statesboro. Shelby
Holmes and Kelsey Reis led the Red Wolves with 11 kills apiece with Reis hitting at a .588 clip. Kenzie
Fields added 10 kills, while Markie Schaedig picked up 21 digs. Jessica Uke led the team with four blocks
and Mallory Warrington handed out 32 assists.
• All eight meetings between the two teams have occurred with David Rehr as head coach for the Red
Wolves.
• The Eagles enter the weekend with an 8-16 overall record and 2-7 league play. The 2-7 mark ranks fifth
in the East Division. Georgia Southern’s SBC wins are over Troy (3-1) and South Alabama (3-2).

GEORGIA ON MY MIND

MAY CLOSING IN ON HISTORY

• Senior Carlisa May moved into second-place on A-State’s all-time career kills list this past Sunday, surpassing
Beth Cochran’s mark of 1636 kills froom 1996-99. May currently stands at 1646 kills and could
catch all-time leader Margie Kolat (1991-94) who has 1,789 kills.
• May also now ranks first on A-State’s career kils per set all-time list, currently averaging 4.05 kills per set
in her career.
• Among active players in all of Division I volleyball, May ranks second with her career kills total, and ranks
fifth among active players across all divisions.

Original article source: http://www.astateredwolves.com//ViewArticle.dbml?DB_OEM_ID=7200&ATCLID=211777416 | Article may or may not reflect the views of KLEK 102.5 FM or The Voice of Arkansas Minority Advocacy Council