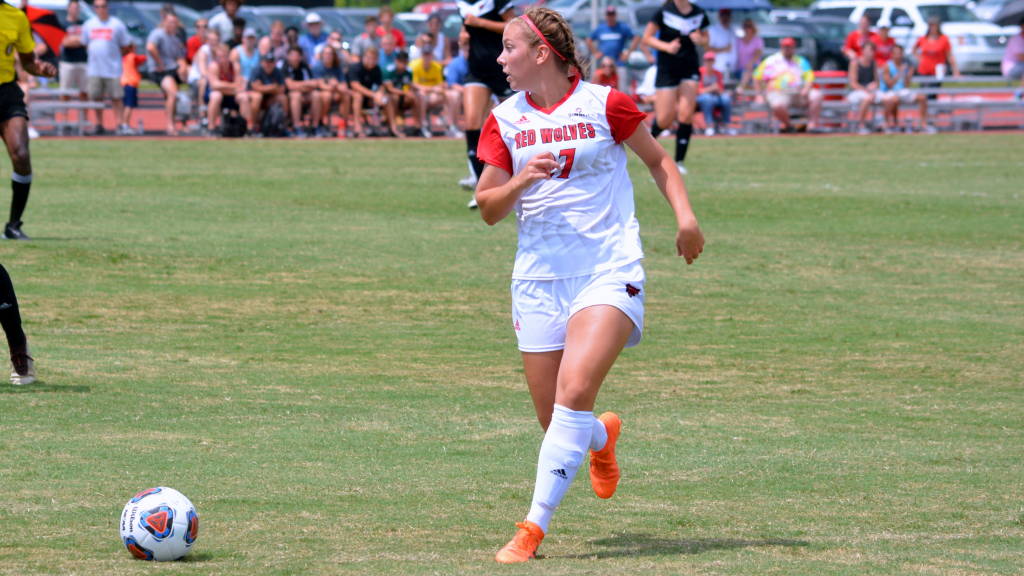 Game officials made the decision late Saturday evening to move the game to Blazer Field after heavy rains moved through Northeast Arkansas and made conditions at the A-State Soccer Park unplayable. The rain continued to fall on Sunday throughout the match as teams attempted to create scoring chances on the turf playing surface.

Furio broke the deadlock in the 68th minute when she took a pass from Maggie Ertl and then chipped in a shot from 12 yards over the head of Panthers’ goalkeeper Lydia Fraga. The goal the third of the season for Furio and it marked the first two of assists on the day for Ertl.

The Red Wolves (5-2-2, 2-0-0) padded their lead in the 75th minute when Maupin collected a corner kick from Ertl and then fired a strike into the goal for a two goal advantage. It was the first career goal from Maupin.

Georgia State (2-9-1, 0-4-0) struggled to find attacking opportunities against the Red Wolves throughout afternoon, while A-State picked its opportunities to push its attack and capitalized on the counter attack. Ertl was among the most active players on the offensive end and finished with four shots, three of which landed on goal. Taylor Schneider added three shot attempts, while Sarah Sodoma and Julianna Coates added two each.

Arkansas State finished with a 17-8 edge in shots, and had an 8-2 advantage in shots on goal. The Red Wolves also won nine corners to Georgia State’s two.

With the victory the Red Wolves have recorded shutouts in four in their five wins this season. A-State finished with four shutout victories during the 2017 campaign and is just two away from tying the school record of six shutouts in a single season that took place in 2012.

The Red Wolves return the competition with a pair of road matchups beginning with Louisiana-Lafayette on Friday, Sept. 28, followed by a trip to Texas State on Sunday, Sept. 30.

Original article source: http://www.astateredwolves.com//ViewArticle.dbml?DB_OEM_ID=7200&ATCLID=211773147 | Article may or may not reflect the views of KLEK 102.5 FM or The Voice of Arkansas Minority Advocacy Council