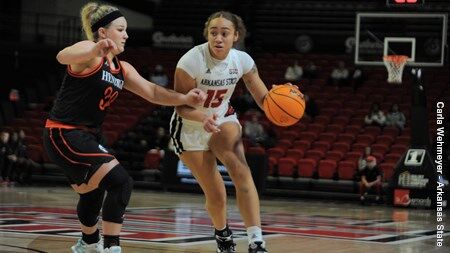 That run pushed the Red Wolves’ (2-2) lead out to 13, while late free throws by Anna Griffin helped maintain distance with the Aggies (1-3), who trimmed the deficit down to two scores three times down the stretch.

Griffin notched her second straight double-double with 10 points and a career-high 15 rebounds, going 2-of-4 from the floor but 6-of-8 from the free-throw line. Keya Patton led the team in scoring with 15 points while grabbing eight rebounds and handing out four assists to accompany three steals. Mailyn Wilkerson added 12 points and five boards, while Izzy Higginbottom scored 10 with a team-high five dimes and four rebounds.

Utah State punched first, surging out to an 11-point lead in the first quarter after a Wikstrom trey, and owned a 23-12 lead after one quarter.

Arkansas State punched back in the second quarter, forcing seven of 12 first-half turnovers in the second quarter en route to an 11-2 run to end the half. Patton successfully converted a three-point play, then the A-State press forced a takeaway that turned into a bucket for Higginbottom with 38 seconds left. The Aggies owned a 31-28 edge at the half, while the Red Wolves allowed them to shoot just 20.0 percent (3-15) in the quarter.

The Red Wolves clawed away at the deficit with a Kiayra Ellis layup tying it at 38-all with 6:31 to go in the third. Ellis scored six points off the bench, swiping three steals and blocking three shots. A Wilkerson trey gave A-State a 41-40 lead with 3:31 left, then A-State led 47-45 after three following free throws by Griffin and Patton.

Ellis knocked down a short jumper to start the fourth and sparked an 11-0 run that was ended by a Robinson three. After Higginbottom drove in a score, Utah State scored six unanswered to pull within six at 60-54. Griffin took advantage of her free-throw opportunities in the final minute, going 3-for-4 to help preserve the win.

Arkansas State continues its four-game home stand Tuesday, hosting 16th-ranked Oklahoma inside First National Bank Arena at 7:30 p.m. on ESPN+. The game, which follows the A-State men’s contest against UT Martin, can also be heard on the radio via the EAB Red Wolves Sports Network station 95.3 and 96.9 The Ticket Radio Network.

Read the original here:
Fourth-Quarter Run Pushes A-State Past Utah State. Article may or may not reflect the views of KLEK 102.5 FM or The Voice of Arkansas Minority Advocacy Council