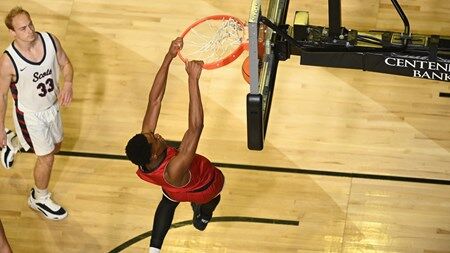 Arkansas State (2-1) improved to 2-0 at home this season after shooting 50 percent from the field and outscoring Lyon (1-2) 48-18 in the paint.  The Scots recorded a .415 shooting percentage and hit 44 percent of their shots from beyond the arc, but A-State recorded 14 steals and scored 36 points off 24 Lyon turnovers.

Ford and Nelson both posted a season-high scoring output, as did junior guard Caleb Fields and freshman forward Alaaeddine Boutayeb with 12 and 10 points respectively.  Forward Omar El-Sheikh added 12 points for A-State, which finished with 27 assists to just seven turnovers.

Sophomore guard Avery Felts dished out a career-high nine assists, while Nelson and Ford grabbed a team-best five rebounds apiece as the Red Wolves and Scots both finished with 32 rebounds.

The game’s first six minutes saw four lead changes and three ties before A-State took the advantage for good.  With the score tied 11-11, the Red Wolves put together a 17-6 run to open a double-figure lead at 28-17 with just under nine minutes left in the first half.

Arkansas State went on to take a 44-34 lead into the break and held a double-digit advantage for the entire second half.  The Red Wolves scored the first eight points coming out of the locker room to make the score 52-34 before going on to the 24-point victory.

Limiting the Scots to 58 points, the Red Wolves have now allowed no more than 61 points in each of their first three games to start a season since 1981-82.

Arkansas State returns to action Friday, Nov. 18, with an 8:00 p.m. (CT) road game at UC Davis.  The contest will appear on ESPN+ and every A-State game can be heard live on the EAB Red Wolves Sports Network, including flagship station 107.9 FM in the Northeast Arkansas area.

More here:
Five A-State Players Score in Double Figures as Red Wolves Top Lyon College 82-58. Article may or may not reflect the views of KLEK 102.5 FM or The Voice of Arkansas Minority Advocacy Council