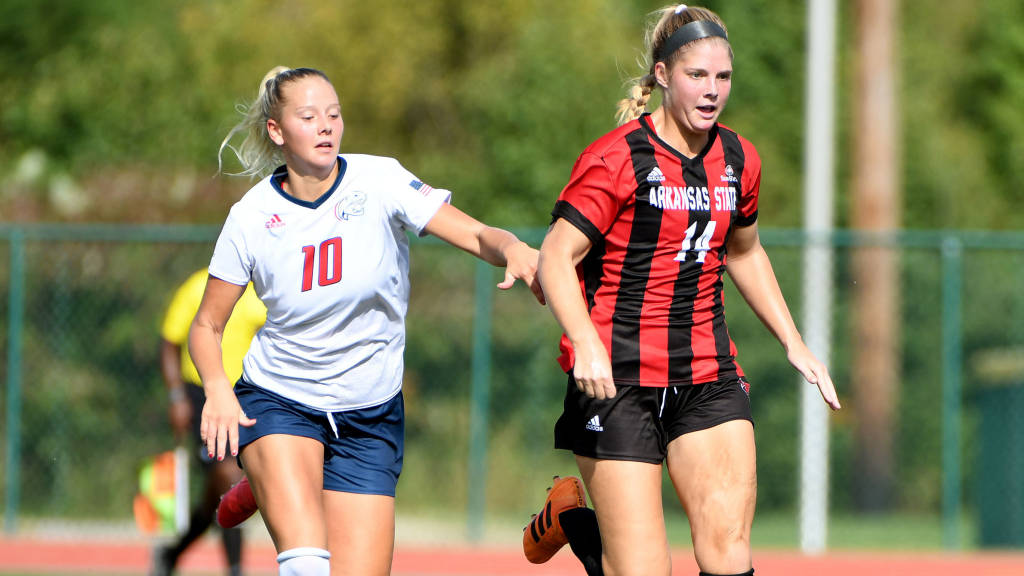 The Red Wolves (7-6-2, 4-4-0) entered Friday’s match in seventh place in the league standings with nine overall points in the race to be one of the top eight teams to make it to the league’s championship tournament. With the victory, A-State vaults into a tie with Appalachian State and Georgia State for fifth place, who had 12 points each entering the day’s matchups.

The Red Wolves were aggressive on the offensive end of the field from the start and put pressure on the Eagles’ defense with their speed and precision passing around the box. The aggressive play paid off in the eighth minute when Maggie Ertl stole a pass off of a goal kick and flicked it on to Victoria MacIntosh who got it to Sarah Sodoma for a finish into the right corner of the net for the early 1-0 advantage.

Ertl found the back of the net in the second half when she connected on two goals that helped the Red Wolves secure the victory. She gave her squad a 2-0 lead in the 49th minute when she put in a strike from the top of the box in the right corner.

Following a goal by the Eagles to get within 2-1 with under 10 minutes to play, Ertl scored on again in the 87th minute on a breakaway after a long pass from Dana O’Boye that allowed the sophomore to get into open space. Ertl’s initial shot off her right foot was stopped by the goalkeeper, but the rebound bounced right back to Ertl who fired with her left and scored to go up 3-1 with under four minutes to go.

Arkansas State finished the afternoon with 27 shots, tied for the ninth most in school history and put 14 of those attempts on goal. The Eagles took 12 shots on the afternoon and put four on target.

Kelsey Ponder earned the win in goal for A-State and earned her fifth win of the season by collecting three saves.

The Red Wolves return to the pitch Sunday afternoon when the Appalachian State at Noon at the A-State Soccer Park. Before the start of the, A-State will honor its graduating student-athletes in a ceremony set to begin at 10:50 a.m.

Original article source: http://www.astateredwolves.com//ViewArticle.dbml?DB_OEM_ID=7200&ATCLID=211776706 | Article may or may not reflect the views of KLEK 102.5 FM or The Voice of Arkansas Minority Advocacy Council