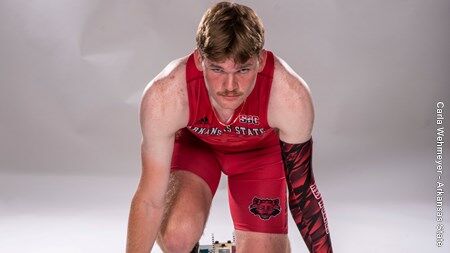 PITTSBURG, Kan. (12/9/22) – A pair of newcomers got their Arkansas State track and field careers off to a strong start Friday, with Colby Eddowes and Patryk Baran competing in the heptathlon at the Boo Rogers Combined Events.

The duo finished the first four of seven total events on Friday first and third, respectively, in the overall standings. Eddowes leads the way with 3,309 points while Baran is not far behind in third place with 3,046 points. The final three events will be contested Saturday in conjunction with the Crimson and Gold Invitational.

Eddowes held the top spot in the first two events to start the day, clocking a time of 7.00 in the 60 meters – a school record for the event when run as part of the men’s heptathlon. The Canberra, Australia, native then cracked the program’s top 10 in the long jump, placing first with a leap of 7.51m (24-7.75), which ties him for ninth all-time.

In addition to Eddowes and Baran in the final three events of the heptathlon, over 40 A-State athletes are slated to compete in the Crimson and Gold Invitational, held Saturday inside the Robert W. Plaster Center.

Continued here:
Eddowes, Baran Complete First Day of Heptathlon Friday. Article may or may not reflect the views of KLEK 102.5 FM or The Voice of Arkansas Minority Advocacy Council