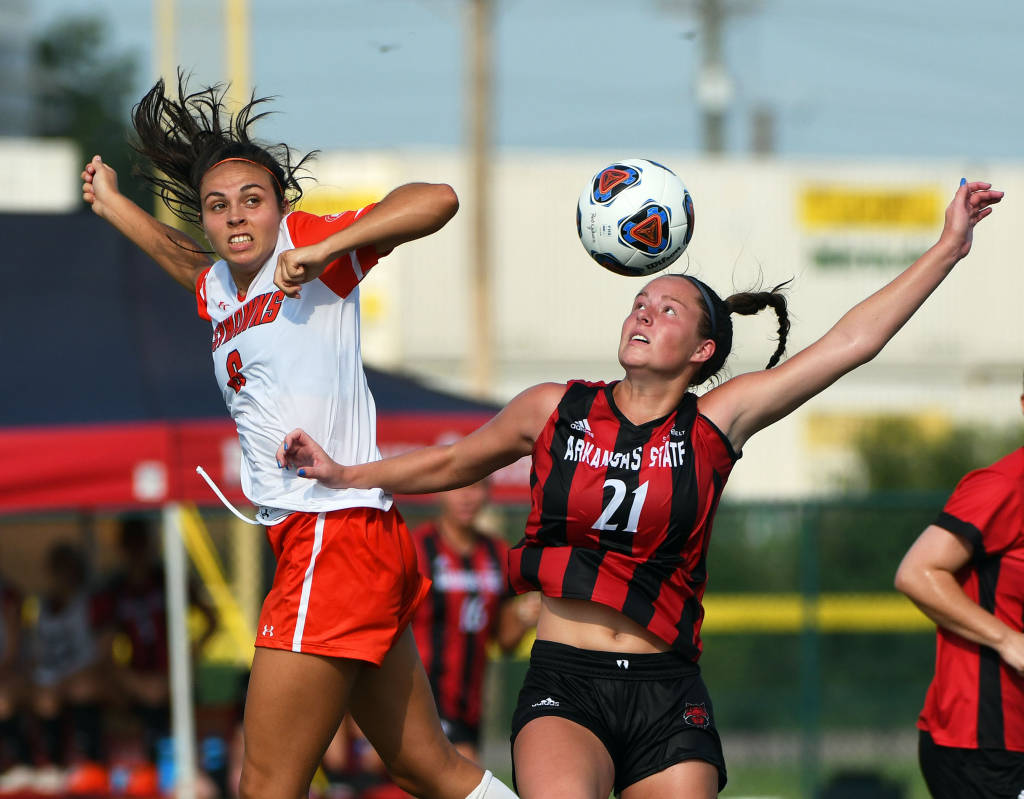 JONESBORO, Ark. (8/16/18) – The Arkansas State women’s soccer team wasted little time to find its midseason form with an impressive 2-0 victory over UT Martin in the 2018 season opener at the A-State Soccer Park on Friday afternoon.

Senior Riley Ebenroth and sophomore Maggie Ertl scored in the 11th and 40th minutes, respectively, to give Arkansas State a two goal advantage into heading into the halftime break. Ebenroth scored the first goal of her A-State career on a free kick from 25 yards out that was placed just beyond the goalkeeper’s reach.

The Red Wolves (1-0-0) kept the offensive pressure on throughout the remainder of the half and scored again when Ertl took a pass from Peyton Trester on the right side of the net and put away a cross for the two-goal advantage.

“Today’s is a really good view of how we are built to play matches,” A-State head coach Brian Dooley said. “Our defensive is strong and good goalkeeping carries us through a lot of our games. We pick our spots in the attack and Riley’s free kick goal, on her birthday no less, was something that really gave us a spark against a really aggressive team.”

The win is the second straight for Arkansas State over the Skyhawks dating back to last season’s 2-0 win in Martin, Tenn.

Despite the 2-0 deficit, UT Martin continued to press the Red Wolves offensively and finished with 19-5 edge in shots, including a 6-3 edge in shots on goal, but A-State’s defense was able to withstand the charge behind solid goalkeeping by Kelsey Ponder and Megan McClure.

Ponder (1-0-0) collected five saves in 67 minutes of work, before giving way to McClure midway through the second half. McClure made one of the more impressive saves of the match in the 81st on a long range shot from distance that she punched away just before it was able to sneak underneath the crossbar for a goal that would have brought the Skyhawks within a goal with under 10 minutes to go.

The Red Wolves continue their opening weekend home stand on Sunday, Aug. 19 with a 1 p.m. match against Omaha. Admission to the match is free.

Original article source: http://www.astateredwolves.com//ViewArticle.dbml?DB_OEM_ID=7200&ATCLID=211768451 | Article may or may not reflect the views of KLEK 102.5 FM or The Voice of Arkansas Minority Advocacy Council