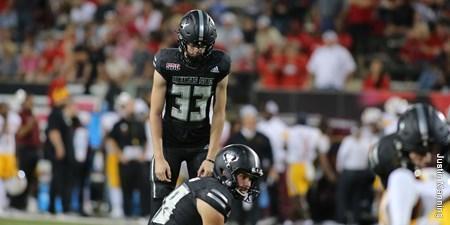 JONESBORO, Ark. (11/10/22) – The Palm Beach County Sports Commission announced Thursday that Arkansas State freshman placekicker Dominic Zvada has been named one of 20 semifinalists for the 2022 Lou Groza Award presented by the Orange Bowl.

Zvada becomes the fifth all-time A-State player ever named a semifinalist for the prestigious honor, joining Blake Grupe (2019), Brian Davis (2012 and 2013), Josh Arauco (2008) and Jeff Caldwell (1994). Arauco is the only player in school history to be tabbed a finalist for the award, issued annually since 1992 to the nation’s top collegiate placeckicker.

A perfect 13-for-13 on field goals this season, Zvada is joined by Chrstopher Dunn of North Carolina State (18-for-18), Joshua Karty of Stanford (14-for-14) and Diego Guajardo (12-for-12) of South Alabama as the four semifinalists that are perfect. Zvada is the only freshman placekicker in FBS with a perfect percentage and is joined by Iowa’s Drew Stevens (12-for-14) as the only freshmen semifinalists, vying to become just the fourth freshman winner and first since Andre Szmyt won the honor in 2018.

Among 10 placekickers nationally without a miss, Zvada is third among those perfect with his 13 makes. The Chandler, Ariz., native is averaging 1.44 field goals per game this year to lead the Sun Belt Conference and rank 22nd in the nation. His 13 consecutive field goals made are tied for the second-most in program history with Davis and is two shy of Arauco’s record 15 consecutive makes set during the 2008 season.

Semifinalists will be voted on by a panel of more than 100 FBS head coaches, SIDs, media members, former Groza finalists, and current NFL kickers to select the three finalists. The finalists will be announced on November 29 and honored at the 31st annual Lou Groza Collegiate Place-Kicker Award Banquet on December 5 in Palm Beach County. The same panel then selects the winner, who will be announced live on ESPN during the Home Depot College Football Awards on Thursday, December 8.

The Award is named for National Football League Hall of Fame kicker Lou “The Toe” Groza, who played 21 seasons with the Cleveland Browns. Groza won four NFL championships with Cleveland and was named NFL Player of the Year in 1954. Although an All-Pro offensive lineman as well, Groza ushered in the notion that there should be a place on an NFL roster for a kicker.

Zvada and A-State return to action Saturday, Nov. 12, with a 2:00 p.m. non-conference contest against UMass. The game will be televised on ESPN+ and can be heard on the EAB Red Wolves Sports Network, including flagship station 107.9 KFIN in the Northeast Arkansas area.

Continued here:
Dominic Zvada Named Lou Groza Award Semifinalist. Article may or may not reflect the views of KLEK 102.5 FM or The Voice of Arkansas Minority Advocacy Council