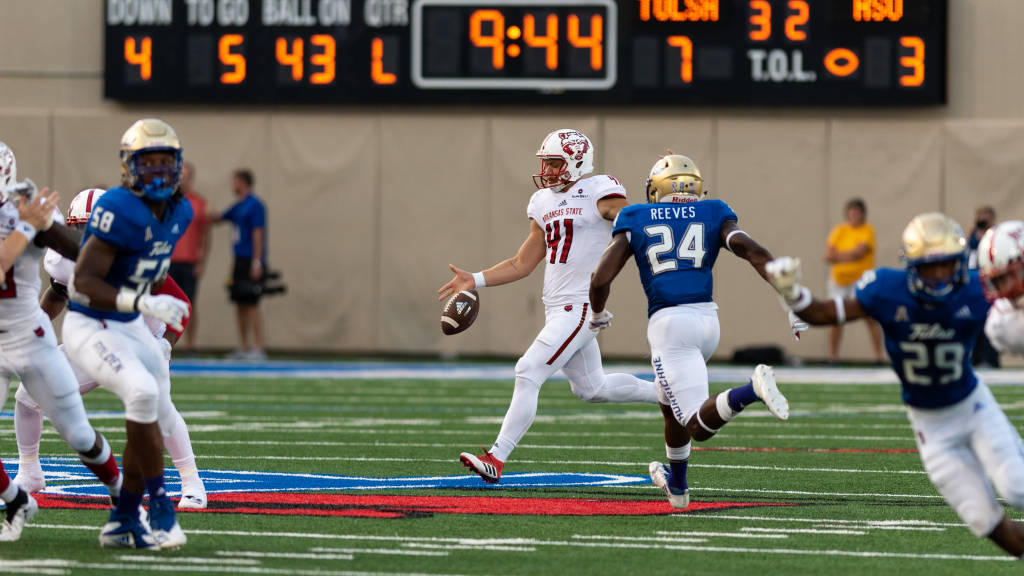 The Red Wolves (2-1) scored 17 points off three Golden Hurricanes turnovers and got a key safety late in the fourth quarter to help secure the squad’s first non-conference road victory since the 2008 season.

“There is nothing better than being able to lineup in the victory formation on about the five-yard line with the clock running down,” A-State head coach Blake Anderson said. “I thought it was great that we were able to close it out by the running the ball every snap. The turnovers the defense created and the way we played offense early in the game really put us in a position to get ahead and it really was a group effort. We still have a lot of mistakes to correct but we are getting there and every week we keep improving.”

Arkansas State led 27-20 in the fourth quarter after Tulsa scored on three straight possessions to get within a score. Cody Grace pinned Tulsa on its own four-yard and on the first play of the drive the Golden Hurricane ran a jet sweep to Keylon Stokes who was tackled in the end zone for a safety to give the Red Wolves a 29-20 advantage and the ball back.

Tulsa would never go on offense again as the Red Wolves ran off the final 7:56 in the game with a steady dose of Warren Wand, Armond Weh-Weh, Marcel Murray and Justice Hansen on the ground. Hansen led the team with 80 rushing yards and a touchdown on 14 attempts, while Wand adds 61 yards. Weh-Weh added 41 yards on the ground and Murray rounded out the rushing attack with 36 yards and a score.

“We thought about going for it and fourth-and-1 but we felt like our defense could get a stop,” Anderson said. “I know our punter would be able to pin them in and I was surprised they fair caught it on the four-yard line and then to be able to get the safety seal it was huge. We knew we could kneel two minutes off the clock and we were just trying to get to that two minute mark as fast as we possible could.”

The A-State defense provided a quick spark to start the second half when Brandon Byner forced a fumble on Tulsa’s first play of the second half that resulted in an 18-yard touchdown run by Hansen to push the Red Wolves lead to 20-7.

The defense got another turnover on the ensuing Tulsa drive when Demari Medley intercepted Luke Skipper and returned it 53 yards for a touchdown to put Arkansas State up 27-7 with 10:25 to go in the third quarter.

Tulsa responded with 13 points over its next three drives to get within 27-20 to setup the safety by Thurmon in the fourth quarter. Thurmon finished the night with nine tackles, a half sack and 2.5 tackles for loss, while Darreon Jackson led the way with 13 tackles, 1.5 tackles for loss and a pass breakup.

Despite a turnover on its opening drive that led to a Tulsa touchdown, the Red Wolves outgained the Golden Hurricane 246-106 in the first half, including a 113-28 edge in rushing yards.

Tulsa took a 7-0 lead early in the first quarter on a 13-play, 62-yard drive that ended with a 1-yard run from Corey Taylor II, but after that the A-State defense turned up its intensity. Tulsa went three-and-out on three of its next four offensive possessions and ended the half with a fumble that led to an Arkansas State field goal.

The kick before halftime was setup when Dajon Emory stripped Tulsa quarterback Luke Skipper and Justin Clifton fell on the ball on his team’s own 43-yard line with 1:10 to go in the half. Hansen marched the Red Wolves down the field and a pass interference penalty with five seconds to go in the ball gave A-State the opportunity to add to its lead.

A-State used a strong rushing attack in the first half, led by Murray who gave the Red Wolves 10-7 lead in the second quarter. Murray capped a 9-play, 48-yard drive for Arkansas State that included a 22-yard run from Wand and a 22-yard pitch-and-catch from Hansen to Justin McInnis to help setup the touchdown.

The Red Wolves return home to host UNLV at Centennial Bank Stadium on Saturday, Sept. 22. Kickoff is set for 6 p.m. and the game will be broadcast on ESPN3 and the WatchESPN App.

Original article source: http://www.astateredwolves.com//ViewArticle.dbml?DB_OEM_ID=7200&ATCLID=211772162 | Article may or may not reflect the views of KLEK 102.5 FM or The Voice of Arkansas Minority Advocacy Council