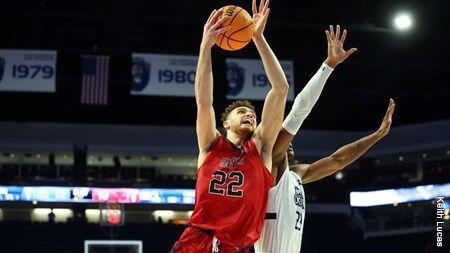 Winners of four-straight games, A-State moves to 9-5 overall and improves to 22-10 in Sun Belt Conference openers all-time. The loss snaps a four-game win streak for Old Dominion and drops the Monarchs to 8-5 overall.

A-State built a 13-point advantage at the break behind a 16-2 run that spanned more than eight minutes. The Red Wolves held ODU scoreless for 7:13 in the half turning a 12-10 deficit into a 23-12 lead. The Monarchs had five made field goals in the first 20 minutes while A-State had five blocked shots. A-State limited the hosts to just 18.5 percent (5-27) shooting in the first half.

The Red Wolves maintained the double-digit advantage much of the second half, matching the largest lead of the game at 13 points, 55-42, with 4:17 to play. Old Dominion mounted a furious rally late going on an 11-0 run to cut the deficit to two, 55-53, with 55 seconds to play. Avery Felts, who finished with six points in the game, drained a running layup as the shot clock dwindled to make it 57-53 with 33 seconds to play.

With Fields hitting 2-of-4 free throws on back-to-back offensive possessions, ODU was able to cut the deficit to two, 59-57, with six seconds left. Ford Jr. was fouled with three seconds left and stepped to the stripe and nailed the first free throw giving A-State the 3-point advantage. The second attempt rimmed out, but ODU was unable to get a shot off before the final horn.

The Red Wolves finished with a 38-36 advantage on the glass despite 18 offensive rebounds for ODU. The Monarchs held just a 9-7 advantage in second chance points. A-State was outscored 28-16 in the paint, 24-4 in the second half.

Arkansas State returns to action Saturday, Dec. 31, with a 2:00 p.m. game against ULM at First National Bank Arena.  The contest will appear on ESPN+, and every A-State men’s basketball game can be heard live on the EAB Red Wolves Sports Network, including flagship station 107.9 FM in the Northeast Arkansas area. For the latest on A-State men’s basketball, follow the team on Twitter (@AStateMB), Facebook (/AStateMB) and Instagram (@astatemb).

Read more:
Defense Carries A-State Past Old Dominion in SBC Opener. Article may or may not reflect the views of KLEK 102.5 FM or The Voice of Arkansas Minority Advocacy Council