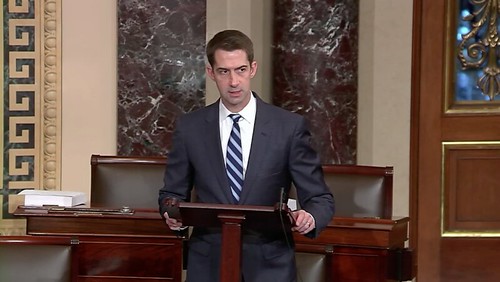 There’s been a lot of confusion and outright misinformation about some proposed arms sales to our Gulf partners, specifically Saudi Arabia and the United Arab Emirates. I’m grateful for the opportunity this morning to clear up a few things, especially considering the current high stakes in the region. As many of you probably have heard, the Islamic Republic of Iran just this morning has shot down an American surveillance aircraft over the Strait of Hormuz. Yet another act of reckless unprovoked aggression targeting lawful behavior on the high seas and in the skies.

Now, I know that for some of my colleagues here, Iranian acts of violence are always to be excused or are somehow always the fault of America and especially of the Trump administration, to which the only appropriate response is to continue to appease the Ayatollahs, to send them pallets of cash as the last administration did, and give them billions of dollars in relief for sanctions. Essentially to say, “Pretty please, stop your acts of terroristic aggression and imperial ambition throughout the region.” It’s my duty to inform all those colleagues that this is dangerous and misguided thinking. Iran, as it did in the mid-1980’s, will meet American restraint with continued aggression. It’ll watch the outcome of today’s votes, in support for our friends in the Gulf, for signs of resolve or weakness. I urge my fellow senators to send the right message to Tehran.

The administration plans to sell roughly $8 billion in arms to our Gulf partners so they can defend themselves-as well as the many thousands of Americans within their borders-all from Iranian aggression. Cancelling those sales would not only endanger Americans overseas and deprive American industry of billions in exports, it would weaken some of the only countries in a position to affectively resist Iran’s violent rampage throughout the Middle East.

Now we’ve heard many objections to these arms sales. First and most amazing given the stakes, some Democrats object for procedural reasons. They’re upset the administration is proceeding over an informal hold placed by the senior senator from New Jersey. In doing so, they claim that the administration is violating a long tradition of honoring informal holds by the Chairmen and Ranking Members of the Senate Foreign Relations Committee.

They’re saying in effect, let’s block arms sales to our allies in an emergency because the Secretary of State hurt the feelings of a few senators. But the actual purpose of those holds, only a courtesy, not a rule, not a law, is to give those senators time to fully examine a proposal, and to foster engagement between the Senate and the administration in good faith. But that’s not how this hold was being used. These arms sales have been held for more than a year. More than a year! How much time does the senator from New Jersey need to make up his mind? How many times does the Secretary of State have to call him and meet with him? How many briefings do they have to provide? How many memos do they have to send? This is not a request for more information or trying to work together in good faith. This was a stalling tactic through and through, it’s yet another example of the Democrats engaged in phycological projection accusing this administration of violation norms when in fact they are the ones that have been violating long-standing, unwritten rules, customs and norms.

The administration is moving forward with this sale by making an emergency declaration, as provided by law and as presidents have done many times in the past. President Reagan proceeded with sales of air-defense systems to yes, Saudi Arabia, using this very same provision. President George H.W. Bush did so as well, selling tanks and fighter aircraft to yes, Saudi Arabia.

But even without this precedent, can there be any doubt, any doubt that our partners in the Gulf are facing a genuine emergency as they fend off Iran?

Oil tankers flying the flags of our allies and partners are ablaze in the Gulf of Oman. Civilian airports, oil pipelines, and American surveillance aircraft have all come under rocket attacks from Yemen’s terror proxy in Yemen.

Make no mistake, this is a genuine emergency. But too few of my colleagues are willing to see the plain facts. They want to talk about anything that will change the subject from Iran and its campaign of aggression throughout the Middle East.

A second objection some argue that our Gulf partners are somehow beneath our support. Really? It was the United Arab Emirates after all that hosted Pope Francis, earlier this year where he conducted a mass for Christians in that nation. The Kingdom of Jordan-another important friend caught in the crossfire of this debate-Jordan has been a reliable and trustworthy partner of the United States for many years, and today it bears the brunt of the refugee crisis and chaos created by Assad’s Iran-backed butchery in Syria.

And while Democrats try to frame this vote as a support for our Gulf Partners alone, let’s not forget that numerous other strong allies of the United States would be affected by these votes as well. Countries like the United Kingdom, and France, and South Korea, and Israel-all a part of the supply chains affected by these deals. Rejecting these sales will hurt them, too. Now is not the time to be rejecting our friends.

Now of course, you could make any of these observations about the Islamic Republic of Iran, which is about as likely to host the Pope as it is to host a Pride Parade. Lost in the criticism of our partners is a much more worthy discussion about the elaborate architecture of torture and repression supervised by Ayatollah Khameini, who is personally responsible, personally responsible for American citizens being held in appalling captivity for years at a time. One such American citizen, Bob Levinson, has been “missing” in Iran for more than a decade.

The same media and politicians who trumpet every misdeed of America’s steadfast partners in the region-regardless of whether such misdeeds are fact or fiction-are strangely silent about the undisputed fact that Iran has the blood on its hands of more than 600 American troops in Iraq in the last decade. 600 Americans were killed at the hands of Iran. Yet we propose to deny arms sales to some of the only countries that are committed to resisting Iran’s bloodstained, anti-American theocracy. It’s time to get our priorities straight.

Third, still other critics fault our Gulf partners for their involvement in the civil war in Yemen, as though they’re the aggressors in Yemen, rather than states that were pulled into a conflict to push an Iranian-armed rebel group off the Arabian Peninsula at the request of the government of Yemen with the support of the United Nations.

Evidently, some of my fellow senators would counsel our Gulf partners to do nothing as a rebel group, armed by their sworn enemy, plunged a neighboring country into chaos, their rockets at their airports and oil pipelines. That would indeed be quite the restrained foreign policy-some might also call it the height of stupidity-that we would never tolerate for our own citizens.

And as to the appalling human-rights conditions in Yemen, I think the current U.S. ambassador to Iraq, Matthew Tueller, said it best to the Senate Foreign Relations Committee indeed: “almost 100 percent of the humanitarian catastrophe in Yemen has been caused by the Iranian-backed Houthis…” Almost 100 percent!
Mr. Tueller is not some Trump appointee. He’s not some partisan hack. He is a career foreign service officer who served as ambassador to Yemen under yes, President Obama. If there is anyone, anyone in the United States government who is in a position to know what’s going on in Yemen and who’s to blame for the carnage in Yemen, it’s the man on the ground rather than politicians in Washington.

Now underlying this whole debate is a romantic wish, a naïve delusion, that our foreign policy can always be pristine, requiring no compromises whatsoever, no acknowledgement of the messy facts around the world, or even that we could flee away from that messy, complicated, dangerous world entirely, relying solely on the Atlantic and Pacific Oceans to keep us safe.

A cursory review of history proves that neither option is available. A cursory review of newspaper headlines proves it, too. Our main adversary in the Middle East-the Islamic Republic of Iran-is a revolutionary power dedicated, from its inception 40 years ago, to the destruction of Americans and, indeed, America itself. They don’t try to hide it: “Death to America” is their slogan, and they chant it all the time.

Our departure from the field will not dissuade the Ayotollahs from that purpose; it will only embolden them. As will the abandonment of our allies in the region. 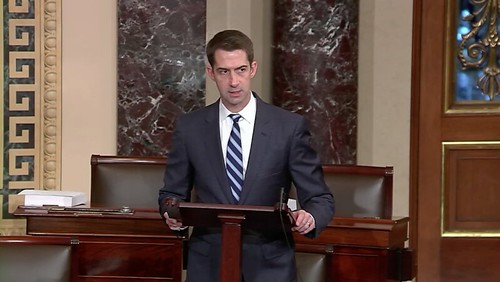 Original article source: http://www.cotton.senate.gov?p=blog&id=1162 | Article may or may not reflect the views of KLEK 102.5 FM or The Voice of Arkansas Minority Advocacy Council