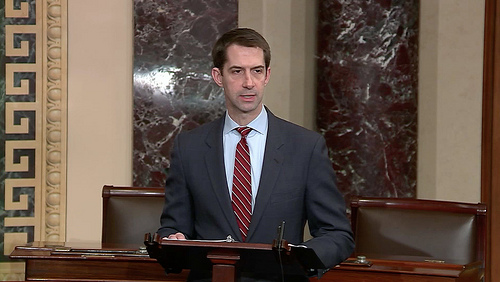 Earlier yesterday, Senator Tom Cotton (R-Arkansas) addressed the rejection of the Green New Deal resolution on the Senate Floor. Click here to watch his remarks in full. In addition, a full transcript of his remarks can be found below.

The Senate has unanimously rejected the so-called Green New Deal-and in a display of political courage for the ages, 43 Democrats voted present, including many of the bill’s own sponsors. Now, many of those are running for president-and in fact it seems like all the Democratic senators are running for president-and perhaps they realize what a disaster the Green New Deal is for them.

The Green New Deal would force a transition in just 10 years, one decade, to 100% green energy, whatever that is. But it’s an impossible goal that would require trillions of dollars in taxes and the effective nationalization of private industry in America.

But that’s not all-no, not all. The Green New Deal would also overhaul or rebuild, “all existing buildings in the United States … to achieve maximum energy efficiency.” All. Every single home and building in America. I guess you can call it the Extreme Home Makeover mandate.

The Green New Deal also calls for taxpayer-funded college and jobs for every person in the country-even for illegal aliens, and even if you’re unable or “unwilling to work.” That’s according to a press release the Democrats sent out and then tried to send down the memory hole when it was mocked, and understandably so. Jobs for everyone who is “unable to work” and “unwilling to work.” There’s a big difference between those two groups of people.

The radical nature of the Green New Deal cannot be overstated. The amount of control it would give to politicians and planners in Washington would be the envy of Soviet Russia. Actually, it would make Stalin blush-and it would take Stalin’s tactics to achieve a Green New Deal. To borrow from Churchill, “socialism may begin with the best of intentions but it always ends with a Gestapo”. Who else is going to come into your home and make sure that it’s energy compliant? Who else will confiscate your gas-powered pickup truck? Who else is going to ensure you don’t commit the terrible crime of eating a hamburger?

So perhaps we can come up with a better name for the Green New Deal, one that reflects its true lineage. Might I suggest the “Red New Deal,” the color of communist regimes the world over. Or perhaps the “Green Leap Forward,” in honor of Mao. I gather some House freshman might actually feel pretty comfortable with those labels.

They claim these radical ideas are necessary to stop the threat of climate change. A threat so dire, the Democrats insist, so dire, that we will all be dead in 12 years-12 years-if we don’t surrender totalitarian levels of power over our lives to central planners in Washington. Yet we gave them a chance to vote on this existential, apocalyptic threat and they all said, “eh, maybe later”.

So, this isn’t really about climate change or even the environment. I mean, come on: what do free college for rich kids and guaranteed jobs for lazy bums have to do with climate change? The answer is nothing. And that tells you all you need to know about what the Democrats are up to.

The Green New Deal isn’t a real policy proposal, it’s just the Democrats’ most fanciful and frightful dreams wrapped into one shiny package. I’d call it a policy platform, but that would probably give it too much credit for substance. The president put it very well. He said the Green New Deal is more like an undergraduate term paper-and one written late at night after too many bong hits, judging from its botched rollout.

Because if you really feared a climate catastrophe, you’d do a simple couple things.

First, you’d build as many new, beautiful, carbon-free nuclear power plants as you could. But the Green New Deal omits nuclear energy entirely, no doubt to please the Democrats’ crony renewable-energy lobbyists and the anti-nuclear Know Nothings in the Democrats’ base.

And second, you’d get tough on the world’s biggest polluters, especially on China. Foreign nations, after all, have driven almost all the growth in global carbon emissions since the turn of the century. But the Green New Dealers seem to believe America is the root of all the world’s problems even though our emissions have been declining. It’s just another case of the Democrats guiding principle: blame America first.

Now of course if we did something as stupid as pass the Green New Deal, those foreign nations would just laugh at us and keep building their economies and polluting, while we tanked our own economy and immiserated our citizens and lost millions of jobs in pursuit of a fantasy. The Green New Deal would amount to America’s unilateral disarmament on the world stage. Which for some Democrats is probably a feature and not a bug.

But sometimes even terrible ideas deserve a vote. So, we gave them a vote on the Green New Deal and the bill’s own sponsors complained. In any event, the Senate flunked the Democrat’s term paper unanimously. And the only reason the Green New Deal got an F, is that there isn’t a lower grade.

So common sense prevailed this time, although I have a feeling this is not the last time we’ve heard of the New Green Deal. Remember, this is not the hobby horse of some eccentric socialist fringe of the Democratic Party. Oh no, not at all. The Green New Deal has 90 Democratic co-sponsors in the House. That’s nearly 2 out of every 5 House Democrats. And the Democrats’ presidential candidates have rushed to endorse the Green New Deal. So remember that when you step into the voting booth in 2020.

Imagine, if you will, a mom and dad with a couple young kids outside Little Rock, let’s say. Every day they drive the kids to school. They commute into the city where they work and back out to the suburbs just so they can afford a home. When they are home on the weekends, maybe they try to fire up the grill on the patio and have a little cookout for the kids.

This working-class family is doing its best to live the American Dream and pass it on to their kids.

The Green New Deal is not for that family. It would outlaw their entire way of life-from the minivan in their garage, to the hamburgers on their grill, to the house they call home.

The Green New Deal would be a death sentence for America’s families, yet the Democrats have the nerve to sell it as a rescue mission.

I reject that fraud on America and now so does the United States Senate.

Original article source: http://www.cotton.senate.gov?p=blog&id=1090 | Article may or may not reflect the views of KLEK 102.5 FM or The Voice of Arkansas Minority Advocacy Council