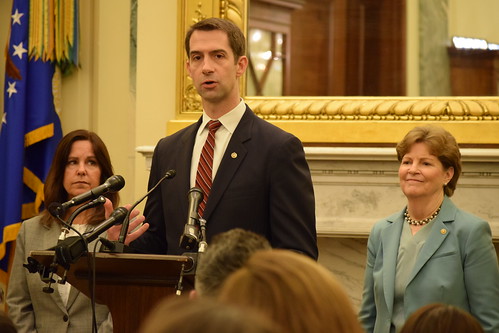 Washington, D.C. – Senators Tom Cotton (R-Arkansas), Jeanne Shaheen (D-New Hampshire), and Martha McSally (R-Arizona) introduced the Portable Certification of Spouses Act, legislation that seeks to improve the portability of occupational licenses from state to state. The bill will also help alleviate the burden military spouses bear when having to re-register a small business in a new state each time a service member gets reassigned to a new military installation.

This proposed legislation would allow the Department of Defense to use defense dollars to help states come up with universal standards for such licenses. Resolving the issue of military spouse licensing is a national security concern, helping alleviate the choice for service members between their career and the career of their spouses.

“One-in-three military spouses work in a field that requires an occupational license, and too many of them are forced to re-certify every time they move between states. Military families already shoulder heavy loads for our country-they shouldn’t also have to worry about state regulations that prevent wives or husbands from working in their own profession. Our bipartisan bill will ensure those spouses can pursue their careers uninterrupted, even while they’re moving their family from state to state and base to base,” said Cotton.

“Military spouses make immense sacrifices and whenever we can find ways to support them, we should act. This legislation will cut through red tape that military spouses face as they practice their licensed professions and move their businesses from state-to-state. This legislation is an opportunity to demonstrate to the nation that Congress can still work across the aisle to solve urgent problems,” said Shaheen.

“Family readiness is military readiness,” said McSally, “We need to continue backing military spouses and families who want to serve our country. This legislation will help ease the burden on military families during moves through the career of a service member. Our support will allow service members to continue their active duty service without negatively impacting their loved ones. I’m happy to join this effort to do that.”

“Military spouses are the keystone in any service member’s family, providing love, stability, and support to our military families. They make enormous sacrifices, enduring long periods away from their loved ones and often are required to move from state to state, leaving behind jobs and friends. Currently, military spouses with careers requiring occupational licenses often face the burdensome task of professionally recertifying each time they must move out of state. This process severely impedes their ability to sustain their careers and increases the stress of frequent reassignments. I am proud to lead this bipartisan initiative in the House with Congresswoman Susan Davis and thank Second Lady Karen Pence, Senator Tom Cotton, and Senator Jeanne Shaheen for their leadership,” said Rep. Banks.

“When our men and women in uniform serve, so do their families – especially military spouses,” said Rep. Davis. “Multiple moves by servicemembers impact the careers of military spouses. I am proud to join in introducing the Portable Certification of Spouses (PCS) Act to cut through red tape and help create career continuity. It’s not only good for military spouses but also our communities who benefit from their talents.”

Over 34% of military spouses work in fields that require a state license in order to practice. These spouses are often required to recertify and pay to recertify this license every time they move between states with their spouse. Re-certification has become too long, expensive, detrimental to the careers of spouses, and prohibitive financially to military families who could benefit from two household incomes instead of one. This process often effects a service member’s desire to stay in the military long-term.

This legislation would impact spouses working in fields such as health-related occupations and education. 56 percent of licensed military spouses in health-related occupations and 29 percent in education respectively. The fields which could potentially benefit from this legislation include, but are not limited to, the following: teachers, advance practice nurses, physician’s assistants, occupational therapists, dentists, dental hygienists, nutritionists, counselors, social workers, veterinarians, cosmetologists, and realtors. 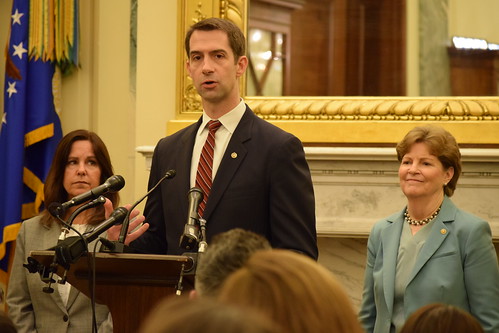 Original article source: http://www.cotton.senate.gov?p=press_release&id=1120 | Article may or may not reflect the views of KLEK 102.5 FM or The Voice of Arkansas Minority Advocacy Council