Washington, D.C. — Senator Tom Cotton (R-Arkansas), Chairman of the Airland Subcommittee in the Senate Armed Services Committee, released a statement on the final version of the National Defense Authorization Act (NDAA) for Fiscal Year 2020. Senator Cotton secured dozens of provisions in the annual defense bill to support Arkansas servicemembers and military families. For a copy of the conference report, click here.

“The National Defense Authorization Act will strengthen America’s warfighters and military families. This bill will make our military a stronger fighting force, while protecting America from fentanyl traffickers, terrorists, and other enemies. I’m pleased that so many Arkansas priorities will now pass into law, including provisions to expand the Arkansas State Veteran’s Cemetery and help military spouses transfer occupational licenses when they move across state lines,” said Cotton.

·      Cracks Down on Chinese Fentanyl: America is suffering from the worst drug epidemic in our history, which has been fueled by deadly fentanyl from China. The bipartisan Fentanyl Sanctions Act, which Senator Cotton sponsored with Senator Chuck Schumer (D-NY), imposes new sanctions and penalties on fentanyl traffickers.

·      Allows Military Spouses to Transfer Occupational Licenses: Many Arkansas military spouses struggle with recertifying their occupational licenses as they move from state to state. The Portable Certification of Spouses amendment allows the Defense Department to fund the creation of interstate compacts that will create common credentials across major professions. The bill will also help alleviate the burden military spouses bear when having to re-register a small business in a new state each time a service member changes station.

·      Expanded Arkansas State Veterans Cemetery: Ensures we keep our promises to Arkansas veterans who choose to be buried alongside their brothers and sisters in arms by transferring approximately 141 acres from the Army National Guard to the Arkansas Department of Veterans Affairs.

·      Includes Homeschool Students in Local JROTC Units: Mandates inclusion of homeschooled students residing in the geographic area served by a JROTC unit. The bill ensures that homeschool students who want to participate in JROTC can do so. 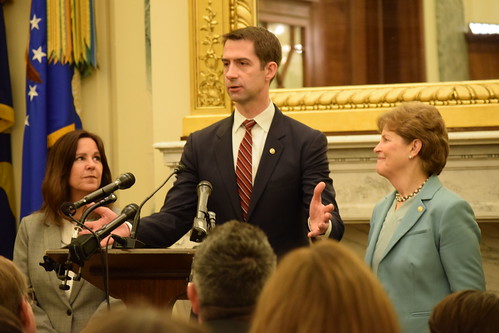 Original article source: http://www.cotton.senate.gov?p=press_release&id=1268 | Article may or may not reflect the views of KLEK 102.5 FM or The Voice of Arkansas Minority Advocacy Council