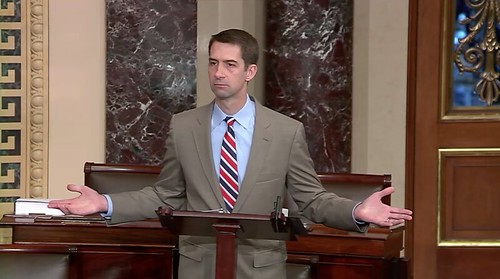 Tomorrow morning, the Senate will vote on whether to disarm our troops as they hold the line in the face of Iranian aggression in the Middle East.

Tomorrow morning, the Senate will vote on whether to empower the ayatollahs as they continue to rampage across the Middle East, attacking U.S. aircraft, attacking ships on the high seas, threatening our troops in Iraq, Syria, Afghanistan, Bahrain, Qatar, and elsewhere.

That’s because tomorrow morning we’ll be voting on an amendment that says quite simply, “No funds may be used to conduct hostilities against the Government of Iran, against the Armed Forces of Iran, or in the territory of Iran, except pursuant to an Act or a joint resolution of Congress specifically authorizing such hostilities.”

This amendment is simple. One might say simple-minded. But it is simply an act of appeasement against the ayatollahs who are currently conducting attacks against the United States and our interests.

Case in point: An earlier version of this amendment included no exception-no exception whatsoever-for our troops to defend themselves against an attack by Iran. You might say that’s a careless omission, but I would say even the fact that it was changed after I pointed out that omission just goes to show that the root of this amendment is Trump Derangement Syndrome.

What does that mean, Madam President? What does it mean to “defend against an attack?” I’m not sure. If an F-15 pilot is shot upon in international airspace, I guess he can deploy countermeasures-chaff-to disrupt the missile. Can he shoot back? Can he shoot back at the Iranian missile battery that shot at him?

Let’s say our troops that are garrisoned in places like Iraq and Syria have incoming mortar fire from an Iranian proxy militia. I guess they can duck and cover in a concrete bunker. I guess that’s a defense. Can they use counter-battery fire to shoot back at that mortar position? I don’t know. Can they? Can they? Beats me.

We have thousands of troops stationed at Al Udeid Air Base, the main air base from which we conduced operations against the Islamic State. Let’s say they have a missile coming in. I guess they can use a Patriot Missile Defense System to shoot that missile down. Can they fire back at the missile battery that shot that missile, that has many more to fire? I don’t know, can they? Seems like offense to me. Maybe it’s defense.

Let’s take a page from history. In 1988, Ronald Reagan authorized one of the largest naval engagements since World War II in response to the exact kind of attacks against commercial shipping and the U.S. Navy on the high seas that we’ve seen from Iran in the last two weeks. However, that operation didn’t commence for four days-four days after an American frigate hit one of those Iranian mines-before we struck back. Was that a defense against an Iranian attack? It doesn’t seem like it would be to me. I don’t know.

What we’re debating here is how many lawyers can dance on the head of a pin when our soldiers are in harm’s way. They need to know when they’re fired upon they can shoot back without any politician in Washington or any lawyer in the Department of Defense looking over their shoulder and second-guessing them. That’s not what they get with this amendment, though.

Consider also the consequences. Many of the speakers today will say this is about deescalating tension. Deescalating. Who’s the one escalating? Who’s the one firing on American aircraft? It’s not Donald Trump. Who’s interfering with freedom of navigation on the high seas? It’s not Donald Trump. It’s the ayatollahs. They’re the ones who manufactured this crisis, because they know the United States is on the strategic offensive. That we’re on the offensive against Iran for the first time in 40 years.

Let’s just think about the language of this amendment. Some people say this is about our constitutional authority, we need to reclaim our authority, that we’ve given too much authority to the executive branch. In a lot of cases I would agree with that. But this amendment is only about Iran. It’s not about China. It’s not about Russia-even though this president has forced the Democrats to discover their inner Cold Warrior.

This is only about Iran in the context of Iran shooting down an American aircraft just a week ago. What better message could you send that this is not about our constitutional authority? This is about trying to tie the hands of the commander-in-chief that they dislike at a time when a foreign nation is targeting our aircraft and our servicemembers.

This amendment would be a loud and clear message to the ayatollahs that we will not strike back. That they can escalate even further and there will not be swift reprisal. If there is, it’ll generate intense controversy in our country. It will only embolden them further to march up that escalatory ladder and threaten American lives. It’s a hall pass for Iranian escalation, really.

There’s no amendment, no bill, no paper resolution that can change the iron laws of geopolitics: Strength deters and weakness provokes. Wars are not won by paper resolutions, they’re won by iron resolution. But this amendment embodies irresolution, weakness, timidity, diffidence.

This Congress on a good day can rename a Post Office, and that’s only after months and months of debate about the Post Office. Are you telling me that if Iran shoots down an American aircraft, or continues attacks on partners like the United Arab Emirates, that this Congress in a matter of minutes, hours is going to pass a resolution authorizing the use of force to respond to that kind of provocation? Please. There’s a reason why we have one commander-in-chief, not 535 commanders-in-chief-or I say again, 535 battalion commanders, the levels at which some of these decisions ought to be made.

Think about the kind of debates we’d have. Think about the Know Nothings we’ve seen here in Washington over the last couple weeks, who would say, “Oh, it wasn’t Iran that made the attack. OK, it was Iran but maybe it wasn’t authorized by the senior leadership of Iran. OK it was authorized, but it didn’t really do that much damage.” It’s kind of like the old line of, “It’s not my dog. He didn’t bite you. You kicked him first.” That’s what that debate would devolve down into while our troops were at risk.

This is a terrible amendment. It’ll do nothing but put more American lives at risk and imperil our interests and our partners throughout the region.

Now I know that the minority leader said earlier that he’s worried about the president bumbling into war. He said it last week on TV, too. Nations don’t bumble into war. He and others have raised the prospect of “endless war”-the wars we’re fighting in Iraq and Afghanistan. They’re long. We’ve made lots of twists and turns along the way. But let’s not forget. Many of the Democrats in this chamber voted to authorize those wars. We didn’t bumble into those. They were considered, deliberate decisions.

This amendment purports to tie the commander-in-chief’s hands relative only to a single nation, which just so happens to be the nation that just shot down an American aircraft. The only result that will come of this amendment passing will be to embolden the ayatollahs and make more likely that which its proponents wish to avoid.

I urge all my colleagues to see the reality of this amendment and to vote no tomorrow morning. 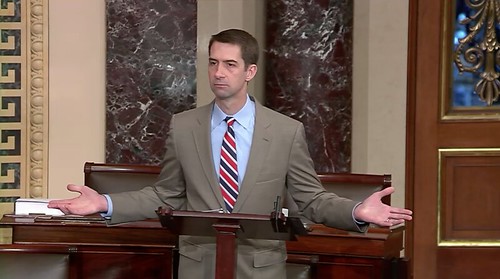 Original article source: http://www.cotton.senate.gov?p=blog&id=1164 | Article may or may not reflect the views of KLEK 102.5 FM or The Voice of Arkansas Minority Advocacy Council