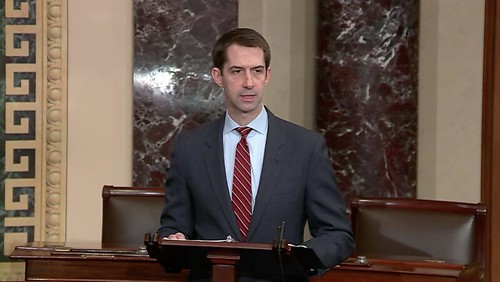 Senator Tom Cotton (R-Arkansas) gave thanks for the U.S. military on the Senate floor. Click here to watch his remarks in full. In addition, a full transcript of his remarks can be found below.

We’re here in the middle of National Military Appreciation Month, so I’m pleased to join my colleagues in showing our nation’s gratitude for every single soldier, sailor, airman, Marine, and Coast Guardsman who is serving-or has served-our nation with honor. This month is specially dedicated to our Armed Forces. But of course, we have ample reason to celebrate and appreciate them year-round because our troops serve year-round and round the clock, willingly accepting limitations on their own freedom and comforts so that their fellow Americans can live in freedom and security.

Right now, thousands of American troops serve in dangerous conditions overseas, far from home. Even now at this moment, our troops are engaged in combat. Surrounded by the enemy. Fighting courageously. We’re all thankful and proud of their service and indebted for their sacrifice-but not only them.

Two weeks ago, I had the privilege of attending a medal ceremony in Arkansas where seven veterans of the Korean War were honored for their service for actions they took in defense of our freedom nearly seven decades ago. Yet these long-ago actions were not forgotten. One week ago, I had the opportunity to thank our military spouses-the unsung heroes of our Armed Forces-for their work raising families despite the hardships of military life.

Those are just a couple of events from the last couple of weeks, yet they are multiplied countless times every day across our country and around the world wherever our troops and their families are present.

At diners and restaurants, a uniform or even a veteran’s cap will still sometimes earn a veteran or soldier a free meal from a grateful neighbor and fellow citizen.

Here in Washington, Honor Flights for our veterans still get police escorts with flashing sirens and children salute those veterans, sometimes asking innocently about their memories of battle.

Across the river at Arlington National Cemetery, the Sentinels of the Tomb Platoon of the Old Guard stand at attention and walk the mat around the clock and in all weather, just as they have for the past 82 years to ensure that those unknown soldiers and every person whose headstone graces those beautiful, rolling fields rest in eternal peace.

I’m proud to live in a country that honors its military in such a fashion. But more important, I’m proud to live in a country whose military is worthy of such honor. So, to every soldier sailor, airman, Marine, and Coast Guardsman, I extend my gratitude, my respect, and my thanks to you and your family for your honorable service, not just today, not just this month, but every day.

Original article source: http://www.cotton.senate.gov?p=blog&id=1125 | Article may or may not reflect the views of KLEK 102.5 FM or The Voice of Arkansas Minority Advocacy Council