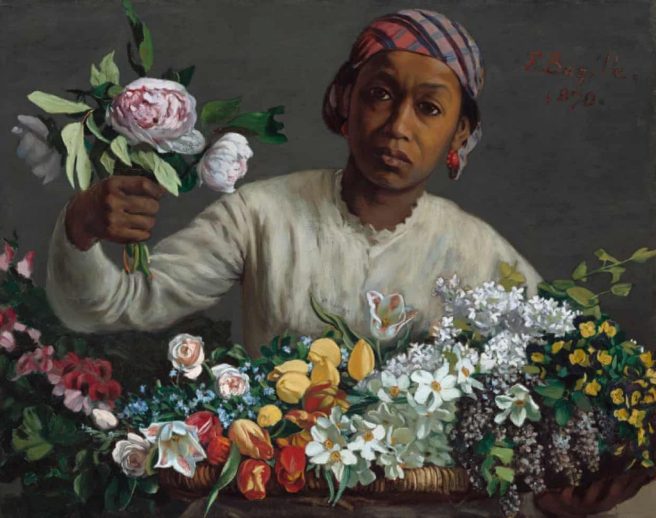 by Nadja Sayej via theguardian.com

In 1863, the French artist Édouard Manet painted Olympia, a reclining nude prostitute, shedding a scandalous light on Parisian brothel culture. But while much of the attention has been on the white model in the painting, Victorine Meurent, the black model beside her, Laure, has been largely overlooked by art historians.

“People have told me, ‘It’s not that I didn’t see the black maid in the painting, I just didn’t know what to say about her’,” said the curator Denise Murrell. “I always felt she is presented in a more stronger light than maids usually are, and I wondered what could be said about her, even though art history said very little.”

This one painting then sparked the exhibition which Murrell has curated, Posing Modernity: The Black Model from Manet and Matisse to Today, opening at Columbia University’s Wallach Art Gallery in New York on October 24th.

From photography to painting and sculpture, as well as film and print correspondence, this exhibit traces how the black figure has been key to the development of modern art over the past 150 years. Many of the artists here bring to light much of what art history has ignored.

“I’m looking for angles that are more relevant than just the standard narrative of the art world,” said Murrell. “I’m giving a number of different narratives that can be discussed around the black figure; there is a wider variety of black models, especially the black female figure, in broader, social roles.”

Among the artists in the exhibit, there are works by Henri Matisse, including “Dame à la robe blanche (Woman in white),” from 1946, showing a black model in a white dress. The painting was made after the artist’s visit to Harlem in the 1930s, where he met local artists as part of the Harlem Renaissance, a black arts movement which celebrated African American culture.

Laura Wheeler Waring, one member of the group, was a painter who made portraits of African American civil rights figures, like author W.E.B. Du Bois and singer Marian Anderson.

“It shows the historical weight and significance of what Harlem artists were doing at the time,” said Murrell. “African American slavery or enslaved individuals were stereotyped and caricatured, and one thing Harlem Renaissance artists wanted to do was give dignity to black female figures, or to black figures, period.”

The other Harlem Renaissance painters in the exhibit include William H. Johnson, who captured the everyday lives of African Americans, whether it was groups of friends in urban settings to rural families, all of which tell “the critical story of modern portrayals of black figures”, said Murrell.

There are also works by Charles Alston, who was known locally for painting murals in Harlem hospitals, but was also recognized as a painter for his portraits of musicians, groups of cotton workers and family portraits. Alston is widely recognized for his bust of Martin Luther King Jr., which today sits in the White House. “He shows African Americans as the urban middle class,” said Murrell. “All aspects of life, high and low, are captured in his paintings.”

The more recent artworks in the exhibit, made over the past 50 years, are different from those, say, 100 years ago. “It’s more empowered because we now have a presence, artists of color,” she said. “You have black portraits by black artists, which broadens the range of artistic styles and strategies.”

There are paintings by female artists such as Mickalene Thomas, who recently captured Cardi B for the cover of W Magazine’s art issue. In “Din, une très belle négresse,” from 2012, is a portrait of a black woman painted colorfully in retro garb.

“She takes 19th-century black women portrayals, but shows them in expressive ways, with rhinestones, afro wigs and a 1970s look,” said Murrell. “They’re women portrayed as sensual but in control of their sensuality, in a manner that shows a black woman who wants to be herself.

“And it’s not just black women, but women period, as sensual but in control of their sensuality and not just for the gaze of the presumed viewer, the white male,” adds Murrell, “You see that perspective unfolding to a more diverse group of artists and subjects of art.”

The exhibit features works by black female artists like Faith Ringgold, known for her quilts portraying black figures like Aunt Jemima, alongside Ellen Gallagher, who has cut up old advertisements of black women to offer her own perspective.

“You can see the evolution as the black figure comes closer to subjectivity, or agency, portrayed by women artists,” said Murrell, “or by showing black women in a way that’s closer to their own modes of self-representation.”

Though the black female figure in art has changed over the past 150 years, there is still progress to be made ahead. “There’s still an underrepresentation of black women artists, and black artists, in the contemporary art world,” said Murrell.

The exhibit is complete in one way, but incomplete in another. “I hope it gives a sense of history to the kind of art we look at today,” said Murrell. “There was a black presence in modern art, we see that in this show and I hope we start seeing more of it.”

Original article source: https://goodblacknews.org/2018/10/22/columbia-universitys-wallach-art-gallery-debuts-posing-modernity-an-exhibition-on-the-evolution-of-black-women-models-in-art/ | Article may or may not reflect the views of KLEK 102.5 FM or The Voice of Arkansas Minority Advocacy Council