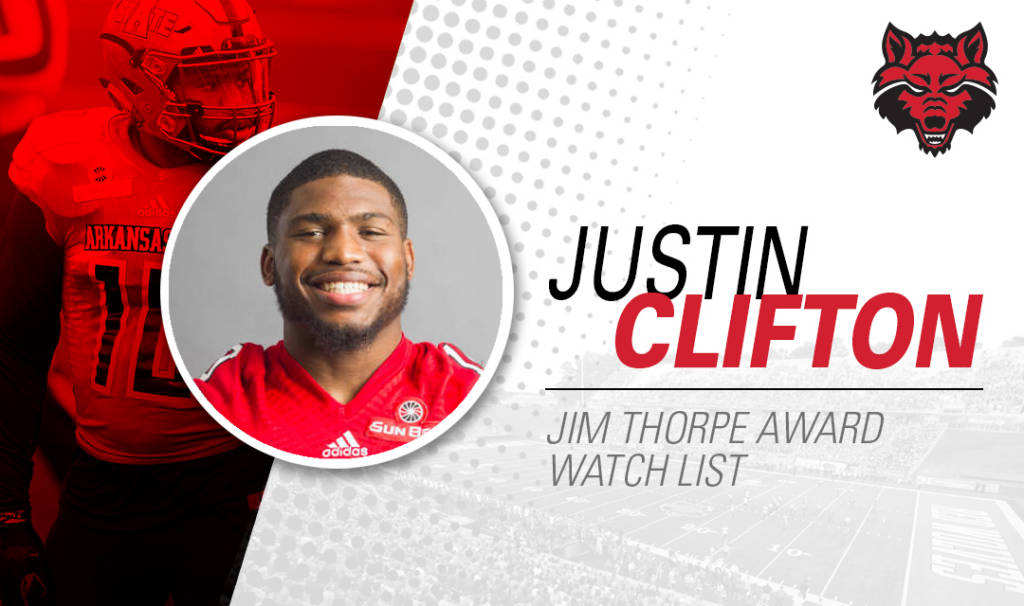 JONESBORO, Ark. (7/23/18) – Arkansas State senior defensive back Justin Clifton has been named to the 2018 Jim Thorpe Award Preseason Watch List, which is given annually to the nation’s top defensive back in college football.

Clifton is one of just 35 players recognized by the organization after he compiled a stellar junior season for the Red Wolves. The Sun Belt Preseason First-Team All-Conference pick compiled 63 tackles to rank third on the team in 2017, while also collecting a career-best 13 pass break-ups and had two forced fumbles. He was the only player in the league and just one of six in the nation with 63 tackles and 13 pass break-ups.

The Tupelo, Miss., native also was posted multiple tackles in every game and accounted for at least one pass break-up in nine games. He returns for his senior season as the school’s active leader in career tackles (179), tackles for loss (18), interceptions (4), pass break-ups (19) and forced fumbles (4).

Original article source: http://www.astateredwolves.com//ViewArticle.dbml?DB_OEM_ID=7200&ATCLID=211735813 | Article may or may not reflect the views of KLEK 102.5 FM or The Voice of Arkansas Minority Advocacy Council