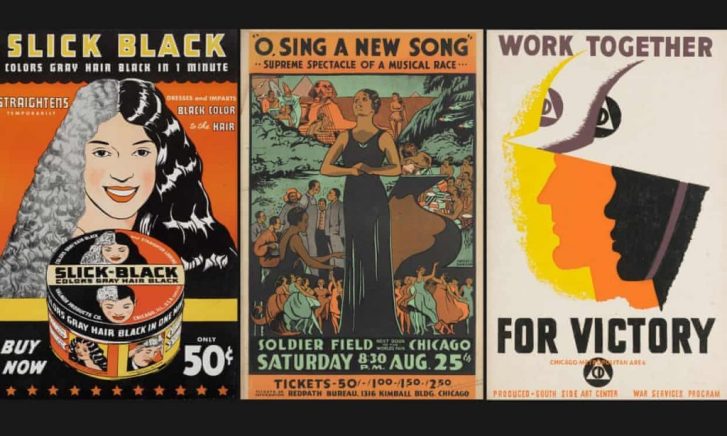 by Nadja Sayej via theguardian.com

The first known African American female cartoonist was Jackie Ormes, who not only penned cartoon strips throughout the 1940s and 1950s, but designed a black doll called the Patty-Jo doll, which was released in 1947.

Patty-Jo, a precursor to Barbie, which came in 1959, was based on a cartoon strip character of the same name, had an extensive wardrobe with preppy shoes, winter coats and ball gowns – and had the brains to go with it.

In a cartoon strip from 1948, Patty-Jo asks a white woman: “How’s about getting our rich Uncle Sam to put good public schools all over so we can be trained fit for any college?”

The doll is on view in a new exhibition in Chicago, African American Designers in Chicago: Art, Commerce and the Politics of Race, at the Chicago Cultural Center. Featuring more than 50 design works, it highlights prominent black figures who worked between 1900 and 1980 in graphic design, editorial and product design, billboard ads, and created the first black-founded ad agency.

The seeds of the exhibit were planted in the 1990s, when University of Illinois professor Victor Margolin started to explore a gap in the history of American design.

“Margolin was one of the first scholars who asked why there has been a lack of scholarship on African American designers,” said the exhibition curator Daniel Schulman. “He went into the field and interviewed 25 designers who were active from 1930s to 1980s, many of which are in the exhibit.”

With a focus exclusively on Chicago designers, it highlights artists who shaped the look of black publications like the Chicago Defender and the Johnson publishing house, founded in 1942 by African American business mogul John H. Johnson, which founded Jet and Ebony magazines alongside the now-defunct Black World, Ebony Man and Black Stars.

“Our thesis is that Chicago is a special center for design for African Americans because it was one of the major sites in the north they came to from the rural south in mid-20th century,” said Schulman. “It has a large, vibrant and politically powerful design community.”

Among the works in the exhibit is an original Patty-Jo doll designed and produced by Ormes, who was a cartoonist for the Pittsburgh Courier, though she lived in Chicago. The doll, in a yellow dress, was highly coveted by African American girls, though it was so expensive, parents had to pay in instalments.

“The doll was noteworthy for its quality. Its facial features were hand-painted and designed from life-like materials,” said Schulman. “It was a role model for any child.”

It ties into the cartoons Ormes built around the Patty-Jo character. “She was a beautiful fictional character who was known for making witty, astute remarks about the world around African American middle-class people in the 1940s and 1950s,” said Schulman. “The doll was in production for 10 years, it had an extraordinary presence and power, and today, they’re collectibles holding an importance place in American doll-making.”

Among the other designers in the exhibit, there are advertisements by Charles C. Dawson, who designed the graphics promoting Slick Black, black hair color tins from the 1930. Dawson was also part of the New Negro art movement, which surfaced around the same time as the Harlem Renaissance black arts movement in New York.

In 1971, the first African American-owned advertising agency was co-founded by Emmett McBain and Thomas J. Burrell. Burrell McBain Advertising boasted clients such as McDonald’s and Coca-Cola.

“It was enormously important,” said Schulman. “It was one of first black-owned firms to land major national accounts like cigarette manufacturers and campaigns for companies that included African Americans in mainstream roles on TV and in magazines, which brought their image to a broader public. It was a new and powerful conception of black commercial, political and social power.”

“Instead of having contemporary life portrayed with celebrities or ordinary people, this cover looks back on 100 years of the emancipation proclamation,” said Schulman. “It shows Ebony engaged with civil rights.”

Also on view is a comic called “Home Folks” by Jay Jackson, a cartoonist for the Chicago Defender who won several awards for his cartoons made during the second world war. A panel on view called Debt and Taxes shows one character complaining: “What do they mean ‘income tax’? It should be ‘outgo’ tax!”

“It’s a masterpiece,” said Schulman. “It shows young, middle-class African Americans in a wonderful mid-century modern interior talking about how expensive things are, the dream of prosperity that was commonplace as a selling technique in the 1950s, this mass consumer market and postwar prosperity. In popular media, you don’t always see African Americans taking part of a stream of plenty in the 1950s.”

But ambition aside, it was tough for African Americans to break into the advertising industry, not to mention navigating the office culture once they were there. “It’s really about working in a field with so few African Americans designers in it,” said Schulman. “There are images that show how frustrating it could be in such a tiny minority in this field – there is one image of Eugene Winslow in his office with commentary that shows he was unhappy being a supervisor of an all-white staff who did not appreciate having a black supervisor.”

Though this showcase of pre-digital design ends in the year 1980, it still is a triumph, especially considering many ephemeral pieces of graphic design from the past were lost.

“It’s not an encyclopedia, it’s an introduction,” said Schulman. “What we’re trying to demonstrate here is the lasting influence and effectiveness of the visual arts and design throughout the 20th century in Chicago.”

African American Designers in Chicago: Art, Commerce and the Politics of Raceis on display at the Chicago Cultural Center until March 3, 2019.

Original article source: https://goodblacknews.org/2018/11/09/chicago-cultural-center-features-exhibition-on-african-american-designers-that-explore-art-commerce-and-politics-of-race/ | Article may or may not reflect the views of KLEK 102.5 FM or The Voice of Arkansas Minority Advocacy Council