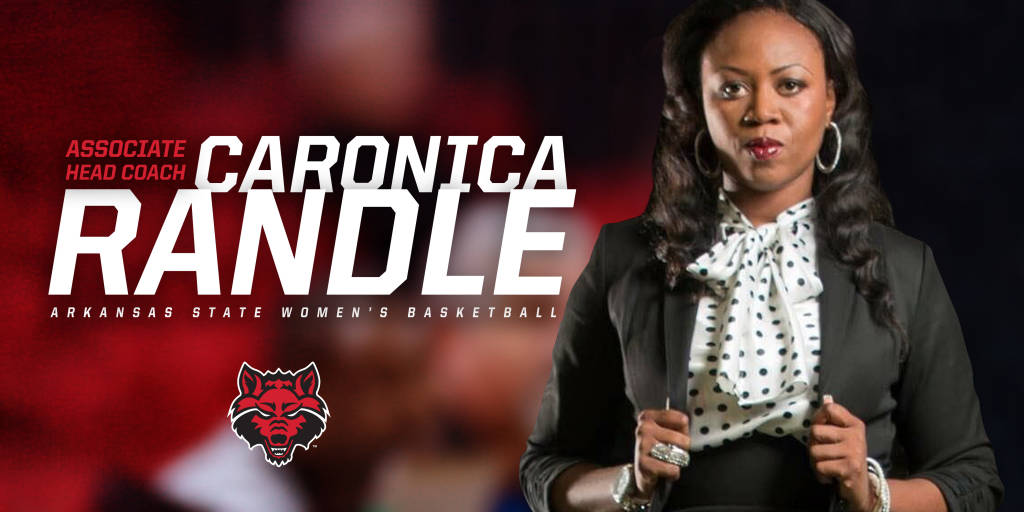 “I am happy to have Caronica back with me as a member of our coaching staff,” said Daniel. “She was a big part of what we did at both Central Arkansas and Marshall. She has now also had the experience to see how other people run their programs as the Associate Head Coach at Furman, and helped their team to postseason play as well.

“Caronica has always been a part of my family and understands what loyalty means to me. She knows what I expect from our student-athletes and our staff, and I know she will represent us well. She is an Arkansas native, and I am glad to have her back home.”

Randle joins the A-State coaching staff after three seasons as associate head coach at Furman. The Paladins appeared in postseason play in both seasons with Randle on staff, including a WNIT appearance this past season. Furman advanced to championship game of the SoCon Conference for the first time since 2000 and finished the year with a 19-14 record. The 2017-18 season saw Furman earn the first postseason win in program history with a victory over UNC Asheville in the WBI.

“I’m excited to come back home and coach in my home state,” said Randle. “I am also elated to be back on the sidelines with Matt Daniel. His passion and vision towards the game of basketball is one of a kind! I’ve learned some great things at Furman University under the outstanding leadership of Jackie Carson, and now I’m ready to get back closer to home with even more support from my Arkansas family and friends.”

Prior to going to Marshall in 2012, she served four seasons as assistant coach and recruiting coordinator at Central Arkansas, helping the Sugar Bears transition from NCAA Division II to Division 1 and register the program’s first Southland Conference championship and three 21-win seasons. Four conference player of the year selections headlined Central Arkansas’ rise, which included a pair of post-season tournament appearances.

A Forrest City, Ark., native, Randle was a basketball standout for the Sugar Bears, scoring 2,089 points to finish third in school history and averaging 17.2 points and 6.1 rebounds per game in her four-year career.

A two-time All-GSC first team honoree, Randle was named conference player of the year in 2006, garnered a pair of Division II honorable mention All-America tabs, and was voted Most Outstanding Player of the 2005 Division II South Regional.  She was named to the All-Southland first team in 2007 after leading the league in scoring in UCA’s first year in the conference.

She was named to the Gulf South Conference West Division All-Decade second team and in 2014 was inducted into the Forrest City High School Hall of Fame.  This past year she was enshrined into the University of Central Arkansas Hall of Fame.

Randle, a member of Alpha Kappa Alpha Sorority, earned a bachelor’s degree in business administration from UCA in 2008 and in May of 2016 completed a master’s degree in adult and technical education from Marshall.

Original article source: http://www.astateredwolves.com//ViewArticle.dbml?DB_OEM_ID=7200&ATCLID=211799172 | Article may or may not reflect the views of KLEK 102.5 FM or The Voice of Arkansas Minority Advocacy Council