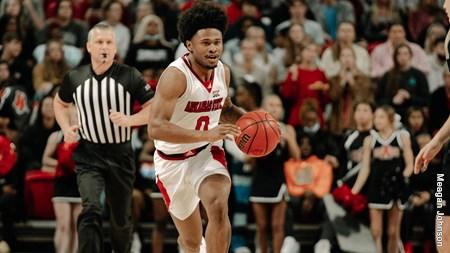 JONESBORO, Ark. (10/16/22) – College basketball season is less than a month away and the Sun Belt Conference unveiled the preseason coaches’ poll and all-conference teams Monday afternoon.

Fields started in all 29 games last year and averaged 7.3 points, 3.6 rebounds, 4.4 assists and 1.1 steals per game. He led the team with 128 assists and was third on the squad with 32 steals. His 128 total assists and 4.4 assists per game ranked third in the league while he ranked fourth in assist-to-turnover at 2.2. Entering his fourth year with the Red Wolves, Fields has 819 career points in 84 games played making 74 starts. He has 323 career assists, tied for the eighth-most in program history.

Fields is the lone returning starter for A-State from the squad the finished the 2021-22 season with 18 victories, just the fourth time since 1999-2000 season with 18 or more victories. Fields is among seven returning letterwinners and A-State welcomes nine newcomers to the 2022-23 roster.

Sixth-year head coach Mike Balado and Fields take the podium for Sun Belt Conference Media Day at 9:15 a.m. Wednesday on ESPN+. The annual Scarlet & Black Scrimmage is Friday at 6:00 p.m. inside First National Bank Arena with free admission. The Red Wolves host Voorhees College in an exhibition game on Wednesday, Nov. 2, at 7:00 p.m. ahead of the season opener at First National Bank Arena against Harding on Monday, Nov. 7, at 7:00 p.m.

Read more here:
Caleb Fields Named Preseason All-Conference. Article may or may not reflect the views of KLEK 102.5 FM or The Voice of Arkansas Minority Advocacy Council