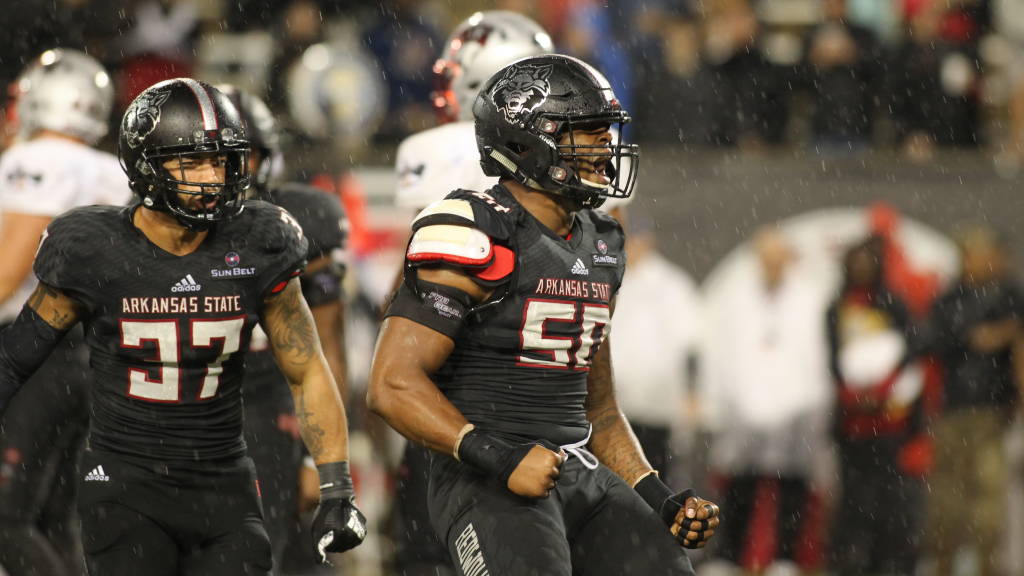 JONESBORO, Ark. (9/24/18) – Arkansas State redshirt sophomore defensive end William Bradley-King has been named the Sun Belt Conference Defensive Player of the Week after his dominating performance in the Red Wolves’ 27-20 victory over UNLV this past weekend.

Bradley-King recorded his second career forced fumble while setting career highs with nine tackles, 2.5 tackles for loss and 1.5 sacks. With the Red Wolves leading 27-20, Bradley-King recorded a strip-sack on fourth down that ended UNLV’s final possession and secured the victory for Arkansas State.

The Kansas City, Mo., native also posted a sack on the final play of the first half, helping preserve a six-point A-State lead by not allowing UNLV quarterback Armani Rogers to get off a pass to the end zone. He additionally came up with tackles on two third-down plays that forced UNLV punts during the game.

Arkansas State will open Sun Belt Conference play Saturday, Sept. 29 at Georgia Southern. Kickoff is set for 5 p.m. and the game will be broadcast on ESPN+.

Original article source: http://www.astateredwolves.com//ViewArticle.dbml?DB_OEM_ID=7200&ATCLID=211773204 | Article may or may not reflect the views of KLEK 102.5 FM or The Voice of Arkansas Minority Advocacy Council