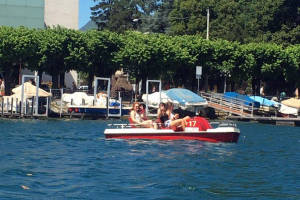 Keep up with the Red Wolves as the team embarks on a 10-day foreign tour in Italy with stops in Rome, Florence, Milan, and much more. A-State will play several matches against foreign opponents during its stay along with a number of opportunities to go sightseeing and learn about the culture. Check back here for blog posts from the team and photos from their experience in Italy!

For our last day in Italy, we got up for an early breakfast, and started our activities for the day. We arrived in Como, and went on an hour boat cruise on Lake Como. We got to see the Versace villa, George Clooney’s Villa Oleandra, and other villas where they shot movies such as Stars Wars and James Bond scenes.

The destination for our scenic boat tour was Bellagio where our first adventure for the day started. After walking through the town, we found our way to a pier where we were able to jump into Lake Como. The water was pretty rocky, but the temperature was perfect. We spent all of our time jumping off the ledge and swimming around in the water. We have plenty of funny videos to prove it!  Following that, we walked back through the village, stopping along the way for gelato, of course, and made our way back to the boat to return to Como.

Once we got back to Como, we started our bus ride to Switzerland. Once in Switzerland, we all went our separate ways. One popular attraction was the paddle boats onto the lake. We also were able to visit many gift shops and chocolate stores. They were even hosting a viewing in the middle of the town for the Brazil-Costa Rica soccer match. At 4:30 we met and loaded the bus to head back to our hotel.

At 7:30, we went to dinner at our hotel. We were served bread, salad, lasagna, potatoes, and pork. Afterward, they brought out a vanilla and strawberry cake that had the Red Wolves logo on it! Overall, it was a great way to finish our foreign tour!

Today the Arkansas State volleyball team went to Milan, Italy. We started off at the Castello Sforzesco, which is a beautiful castle built in 1415. Then we went to the Leonardo da Vinci statue that also had his most famous students beneath him. From there we walked through the city to the famous cathedral which took 600 years to build and can hold 40,000 people inside.

After the tour, we had free time to eat and shop in the fashion capital of the world, which has the popular Galleria Vittorio Emanuele II. It includes the most expensive brands like Prada, Gucci, Louis Vuitton and Versace. A lot of us went down the two main strips of shops and blew out our bank accounts!

Later that night we played the Pallavolo Arosio volleyball team. The gym once again did not have air conditioning, but we got a good workout in. We won 3 of the 4 sets. We enjoyed some treats after the game with the other team. Overall, it was an amazing experience we will never forget. We loved Milan!

Today Arkansas State Volleyball went to Cinque Terre. Within Cinque Terre there are five towns that sit along the coast. There is a single train that is able to travel along all five towns. We were able to experience the many clear beaches where many civilians were cliff jumping in their spare time. The views were extraordinary with the mountains surrounding the towns.

Personally, my favorite part was seeing all the different types of dogs around the towns. They added joy and entertainment to our day. The Leonardo Di Vinci Hotel that we are staying in has a fluffy dog that looks like a lion is my all-time favorite out of them all.

After our five hours of exploring the towns, we had a four-hour drive back to the hotel where we had the chance to get rest and reenergize for our game tomorrow. #GoRedWolves

Today we started off with our hotel breakfast filled with croissants, bacon, fruit, and much more. We then headed to the walled city of Lucca where we had a guided bike tour. On the bike tour we could see the mountains in the distance, drive through the dungeons of the wall, and see local art exhibitions! After the bike tour, we stuffed up on pizza, pasta, or paninis and then finished it off with our daily favorite, gelato.

Our next stop was Pisa. We all took the typical tourist pictures that included holding up the Leaning Tower, trying to kick it down, or hugging it. It’s actually A LOT harder than it looks. It took some people longer than others, but eventually everyone got their desired picture. We then all headed to a local restaurant where we ate our yummy three-course pregame meal.

We arrived at the gym for our match and were immediately hit with that hot gym air. But it was all okay because we were excited to play an Italian B1 team, the highest level we will play this trip, called Asd Pallavolo Castelfranco. After the match, we took pictures, exchanged dance moves where we learned how to do the “disco”, and then ate some of the best pizza we have had this trip!

Today the A-State volleyball team started its day off with an hour and a half bus ride to Florence, Italy. We started our visit to the beautiful city with a tour of the historical sites, such as the Holy Cross Church where both Michelangelo and Galileo’s tombs are located. We also saw the outside of the studio where Leonardo da Vinci painted the Mona Lisa. One of the most impressive sites was the Santa Maria del Fiore, a cathedral that is a massive architectural feat.

After the tour, the team explored all the different areas of the city. We ate pizza, gelato, paninis, and shopped until we dropped. Some even ate lunch in front of the David statue created by Michelangelo. After a team dinner, we left the stunning city of Florence to head to our second match of the trip.

We arrived at a dome-shaped building for our match. The air conditioning was lacking and the mosquitos were viscous, but the team fought hard through a five-set match to pull out a win over an Italian B2 club team. Although during the game all players were competitively battling, after, both teams bonded over pizza despite the language barrier.

Day four started out with a road trip to the beautiful Siena, Italy. The view on the way there was so breathtaking. It’s like nothing we’ve seen before. There were wineries everywhere you looked on the countryside. It was one of those places that makes you want to move there.

Siena is full of rustic stores and restaurants that are so unique. The whole city is surrounded by gorgeous plants and scenery. Siena was my favorite stop so far on this amazing trip.

We finished the day with practice in Montecatini. We were blessed with an air-conditioned gym this time. We also had a four course meal at the hotel Adua. We were treated to a great dessert. We had such a wonderful day!

We started our second day bright and early with breakfast. While our hosts provided us with American breakfast staples including pancakes, bacon, and eggs, the rest of the meal consisted of very European selections of aged meats, cheeses, pastries, tomatoes and fresh fruit. After breakfast we departed the hotel to begin our day which was jam-packed with amazing tours and sightseeing.

Despite the fatigue from our journey overseas and the events of day one the group was ecstatic to continue our touring of Italy. We had the opportunity to tour the Vatican City and see breathtaking sights including the Vatican Museums, the Sistine Chapel and St. Peter’s Basilica. Did you know it took Michelangelo five years to paint the ceiling of the Sistine Chapel? Between our two tours we had a few hours to walk around the city and shop (because with us there’s always shopping, trust me). The second part of our day we got to experience the Roman Forum and the iconic Colosseum, where in the earlier days of Rome citizens would have gathered to take in spectacles such as gladiator contests, reenactments of famous battles and even executions.

In the evening we played our first of four matches we have scheduled throughout our trip. One thing we were not used to was the fact that the court we played at was basically outside, simply covered by a domed white tent. Even though there was a language barrier, the team we played was extremely friendly and helped us understand a few differences in international volleyball. For example, hitters from both teams warm up at the same time on their respective sides of the nets. Outside hitters and middle hitters go first and then right side hitters and middle hitters go, all the while aiming line to avoid hitting players on the other team.

Our two days in Rome were amazing and filled with fun. Tomorrow we go north to start our tour of Tuscany! Arrivederci Rome, you have our hearts.

Our trip began with an EARLY start when our travel group headed to the Memphis airport at 5 a.m. Everyone was giddy with excitement as we met up with family and teammates at the airport. We took a short flight to Dallas, Texas, before we hopped onto the 10 hour flight to Rome! Our seats on the large plane had screens to watch movies and play games, so it was hard for us to sleep… We arrived in Rome at 7 a.m. with swollen feet, jet lag, and a lot of wholehearted spirit!

We traveled to downtown Rome and were led by a tour guide through the beautiful streets. One of the sites we saw was a large, palace-like building with statues surrounding the steps; people call it the Wedding Cake. We then travelled to the Trevi Fountain where we all threw coins into the water, hoping to either come back to Rome or to make a wish. The buildings throughout the city were old but so well kept. Flowers hung from every window sill. The next stop was the Market Square, which was surrounded by busy restaurants and sculptures. We then had time to tour Rome on our own, eating pizza, pasta and lots of gelato.

Following our tours, we had our first practice in the sports facility. Our team had to get acclimated to the volleyballs; they are a bit smaller and denser in Europe. We’re getting really excited to play our first match tomorrow and continue to learn more about this beautiful country! CIAO!

Original article source: http://www.astateredwolves.com//ViewArticle.dbml?DB_OEM_ID=7200&ATCLID=211718684 | Article may or may not reflect the views of KLEK 102.5 FM or The Voice of Arkansas Minority Advocacy Council