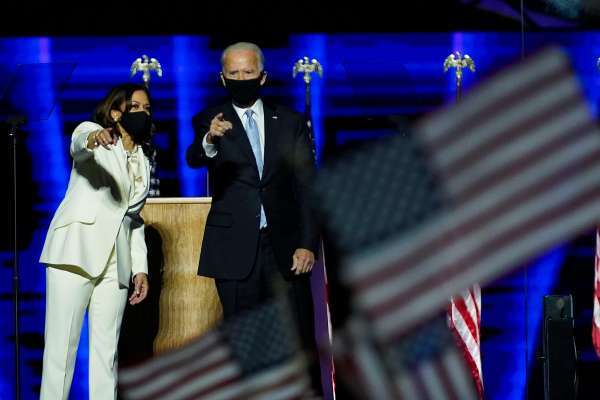 Yesterday was a good day. As Joe Biden and Kamala Harris became President-Elect and Vice President-Elect of the United States of America, in several cities across the nation literal dancing broke out in the streets. So many people from all stripes of life — Black, Brown, white, Asian, Indigenous — were together exhibiting their joy at the victory.

The massive turnout — in the middle of a surging pandemic, no less — to celebrate the repudiation of the path towards division and exclusion in favor of the path towards inclusivity and diversity was the most patriotic thing I’ve witnessed on a national level in a long time. And so many were carrying and waving American flags.

It’s being acknowledged in the media – as well as in President Elect Biden’s speech – how vital the African American community was in saving this nation’s democracy.  The visuals and the fireworks brought home for me just how much at heart Black people are patriots.

Even though from jump we have been treated unjustly, cruelly, unfairly — we have worked tirelessly to fight for the ideals America is supposed to stand for. Justice. Freedom. Equality. Perhaps we believe in democracy the most because we have always been the most vulnerable when it doesn’t exist.

Hearing Vice President-Elect Harris strut out to Mary J. Blige‘s “Work That” and President Elect Biden sprint out to Bruce Springsteen‘s “We Take Care of Our Own” before their respective speeches, then enjoy the crowd and fireworks to some Jackie Wilson, Coldplay, Hall & Oates and Tina Turner, made me think about some of my favorite takes on patriotic American songs by African American artists that could have been cool to play as well. (My most recent favorite from the past few years? Jon Batiste‘s inventive, unexpectedly moving version of “The Battle Hymn of the Republic.”)

When my sister Lesa texted me a song she’d been listening to all day — “This Land Is Our Land” by Sharon Jones and the Dap Kings — my thoughts turned to action and I started making the playlist below I call “Black Americana” for inspiration now and in the months to come:

From the historic 1939 performance of “America (My Country, ‘Tis of Thee)” by Marian Anderson on the steps of the Lincoln Memorial to Whitney Houston‘s iconic deliverance of “The Star Spangled Banner” in 1991 at Super Bowl XXV, this compilation covers the songs we learn in elementary school along with those that have been interpreted or inspired original compositions on what it is to be American.

Included are Melba Moore‘s soulful 1990 rendition featuring Dionne Warwick, Stevie Wonder, Anita Baker and others of the unofficial Negro National Anthem “Lift Every Voice and Sing” written by brothers James Weldon Johnson and J. Rosemond Johnson, as well as surprising covers of “When Johnny Comes Marching Home” from Patti LaBelle and the Bluebells and “Yankee Doodle Dandy” from Prince.

Marvin Gaye’s “scandalous” version of “The Star Spangled Banner” from 1983’s NBA All-Star game and Jimi Hendrix‘s blistering one from Woodstock (within it, Hendrix references “Over There” yet  another patriotic anthem) are on the list as are Gary Clark Jr.’ s “This Land” and Childish Gambino‘s 21st-century anthem “This is America.”

Other artists on this list include James Brown, Beyoncé, Billie Holiday, Billy Preston, BeBe Winans, Pharrell Williams, Jimmy Smith, King Curtis and 2 Live Crew and of course, one of the most classic takes on a patriotic standard, Ray Charles‘ version of “America The Beautiful.”

Original article source: https://goodblacknews.org/2020/11/08/black-americana-traditional-and-modern-takes-on-patriotic-songs-by-african-american-artists-listen/ | Article may or may not reflect the views of KLEK 102.5 FM or The Voice of Arkansas Minority Advocacy Council