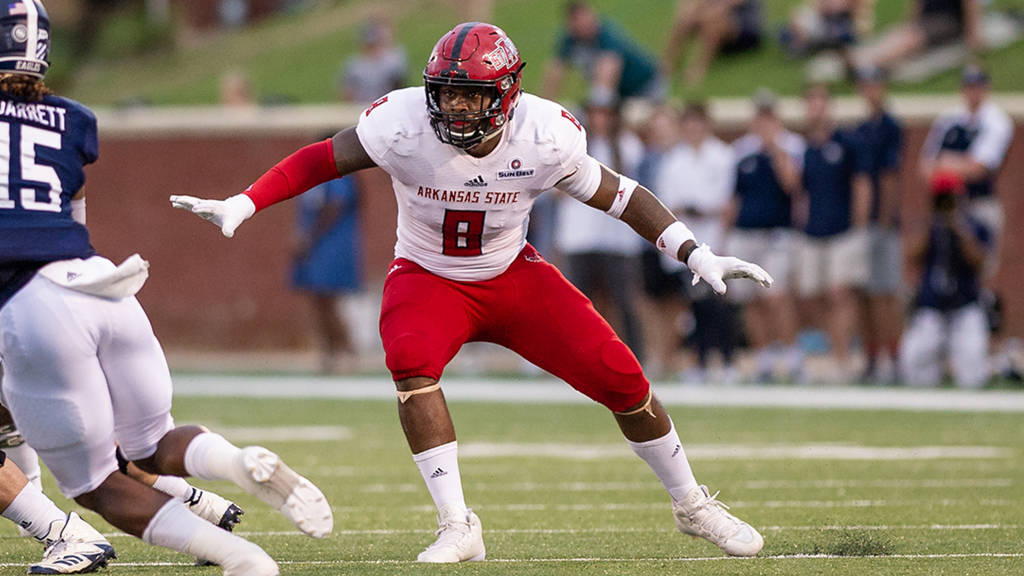 JONESBORO, Ark. (11/8/18) – The South Carolina Football Hall of Fame (SCFHOF) has announced that Arkansas State senior defensive end Ronheen Bingham has been named one of 20 finalists for the Blanchard-Rogers Award that is presented annually to the most outstanding collegiate player of the year who has ties to the state of South Carolina.

The Blanchard-Rogers trophy will be awarded at the SCFHOF’s annual Enshrinement Banquet on April 23, 2019, at the Hilton Greenville. This year marks the sixth straight season the organization has honored the collegiate player of the year from South Carolina.

The winner is chosen through a vote by SCFHOF members, including fan members, sports media, and its Boards and Executive Team. The organization encourages football fans to participate in the vote by visiting its web site to become member (scfootballhof.org/membership/join/). Free membership options are available, and online voting (scfootballhof.org/membership/vote/) on the same web site will close Dec. 10.

Bingham currently leads the Sun Belt Conference in sacks (6.5 total) and is tied for first in tackles for loss (13.5 total). His 0.7 sacks per game also ranks him 31st in the nation, while his 1.5 tackles per game is the 17th best average in the country.

Named the Sun Belt Conference Defensive Player of the Week by College Sports Madness on Oct. 21, Bingham has 52 tackles that are the most on the team among defensive lineman and also ranks him 25th in the conference among all players. He has recorded double-figure tackles in two games this season and has been especially impressive over the last five contests, recording 39 of his 52 stops over that span for a 7.8 average per game.

The mission of the SCFHOF is to honor the state of South Carolina’s football legends, and to be a catalyst for youth, workforce and community development.

Original article source: http://www.astateredwolves.com//ViewArticle.dbml?DB_OEM_ID=7200&ATCLID=211779755 | Article may or may not reflect the views of KLEK 102.5 FM or The Voice of Arkansas Minority Advocacy Council