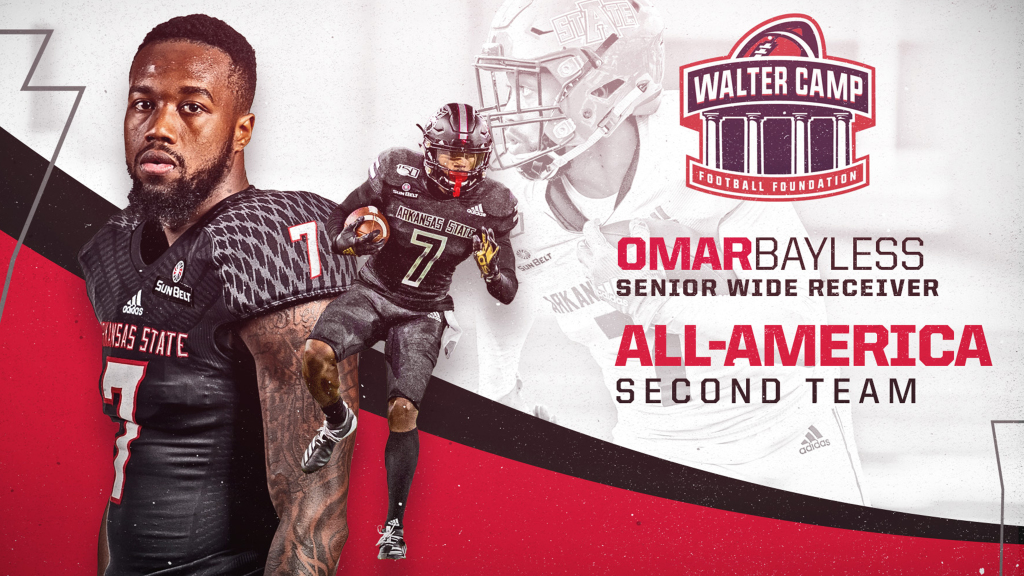 Bayless was one of four players chosen at the wide receiver position on the 130th edition of the Walter Camp All-America Team, making it the oldest of its kind in the nation.  The Laurel, Miss., native was also one of just four players from the Group of 5 to make the 51-man list comprised of first-and-second-team selections.

He is the first A-State player since 1987 to be named All-America by the Associated Press (AP), American Football Coaches Association (AFCA), Football Writers Association (FWAA), Sporting News or Walter Camp, which are used to determine consensus All-America.

Also a 2019 Pro Football Focus (PFF) Honorable Mention All-America choice, Bayless ended the regular season with 84 receptions for 1,473 yards and 16 touchdowns while also adding a pair of blocked kicks.  His two blocked kicks are tied for the most in the nation, while he ranks second in both receiving touchdowns and yards and tied for 12th in receptions per game (7.0).

The 2019 Walter Camp All-America Team will be honored at the organization’s 53rd annual national awards banquet on Jan. 18, 2020, at the Yale University Commons in New Haven, Conn.

Original article source: http://www.astateredwolves.com//ViewArticle.dbml?DB_OEM_ID=7200&ATCLID=211816880 | Article may or may not reflect the views of KLEK 102.5 FM or The Voice of Arkansas Minority Advocacy Council