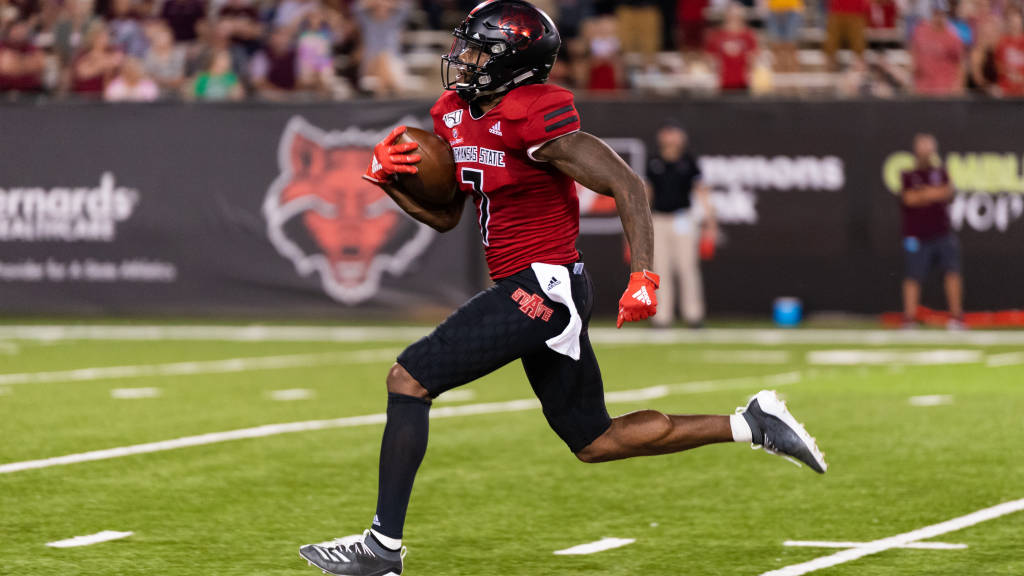 JONESBORO, Ark. (9/25/19) – The Tallahassee Quarterbacks Club Foundation announced Wednesday that Arkansas State senior wide receiver Omar Bayless has been added to the watch list for the 2019 Biletnikoff Award, issued annually to the nation’s outstanding FBS receiver regardless of position.

Bayless was among eight receivers who were the first additions to this year’s watch list, which was initially announced July 18 and included A-State senior wideout Kirk Merritt.  With the addition of Bayless, the Red Wolves have two receivers on the Biletnikoff Award watch list during the same season for the first time in school history.

In addition to Bayless and Merritt, other A-State receivers to earn the recognition were J.D. McKissic in 2013 and Dwayne Frampton in 2011.  A two-time All-Sun Belt Conference Honorable Mention selection, Bayless is currently ranked second in the nation in touchdown receptions (6), third in receiving yards (476) and 24th in receptions (6.5 per game).

The Laurel, Miss., native has recorded over 100 receiving yards four of the last five games dating back to the 2018 season.  Including the Arizona Bowl and the first four games this season, he has posted 33 receptions (6.6 rpg) for 605 yards (121 ypg) and six touchdowns.  He had four touchdown receptions in the 2019 season opener versus SMU that tied the school and Centennial Bank Stadium records.

Bayless, who also had a Centennial Bank Stadium-record 89-yard reception against Southern Illinois, has 110 career receptions for 1,598 yards and 15 touchdowns during his career.  He needs one more touchdown catch to tie Taylor Stockemer (2009-12) for the all-time A-State record.

The Red Wolves completed their non-conference schedule with a 2-2 record and are now set to face Troy (2-1, 0-0) in their Sun Belt Conference opener Saturday at Veterans Memorial Stadium.  The Red Wolves will face the Trojans in their first league game for just the third time ever (2009, 2013, 2019).

Original article source: http://www.astateredwolves.com//ViewArticle.dbml?DB_OEM_ID=7200&ATCLID=211812590 | Article may or may not reflect the views of KLEK 102.5 FM or The Voice of Arkansas Minority Advocacy Council