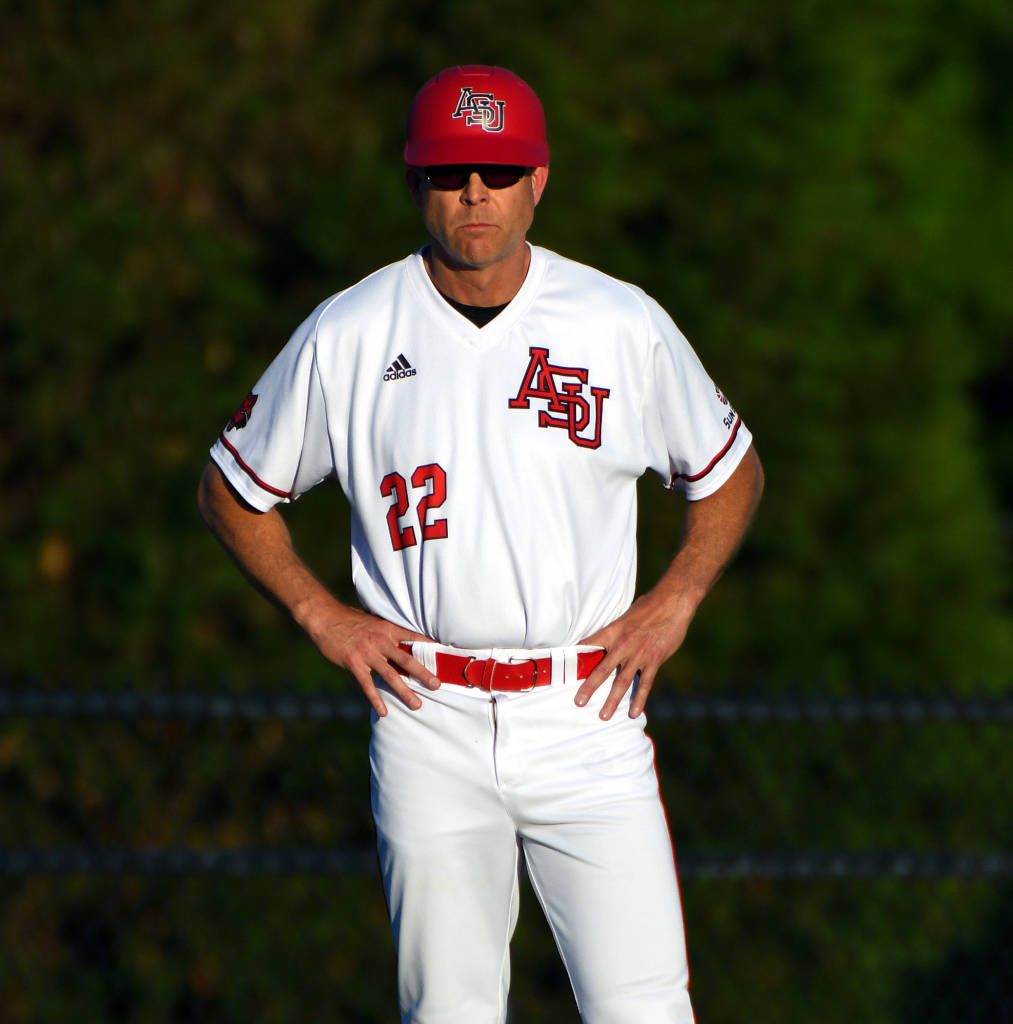 • Arkansas State is now 25-23 on the season and 11-13 in the Sun Belt Conference after taking two of three from Appalachian State over the weekend at Tomlinson Stadium.
• The 27 runs recorded by the squad was the most runs scored at Tomlinson Stadium since 1993 against Memphis State. Five Red Wolves recorded three or more RBIs in Saturday’s win over the Mountaineers.
• The home team sent 16 batters to the plate in the first, scoring 12 runs on nine hits. Six of the nine batters in the A-Statelineup had hits with Eli Davis, Drew Tipton and Tyler Duncan each recording two hits apiece. Tipton was responsible forfive RBIs on a double and a triple while Duncan drove in four with a single and a triple.
• Tyler Duncan went eight for 11 in the series against App St while recording 10 RBIs, two triples and a home run. The British Columbia native hit a team-high .727 while earning a team-high .714 OBP percentage
• Sky-Lar Culver enters the weekend series leading the team in a number of stat categories including a .333 batting average, RBIs (39), hits (60), doubles (14).
• Arkansas State is hitting .258 as a team, 7 Arkansas State players have multiple HRs on the season (43 total), led by Justin Felix‘s 9 home runs.
• The Red Wolves pitching staff currently owns a 4.77 ERA and has struck out 378 batters in 422.2 innings pitched.
• Kollin Stone has recorded six of the team’s eight saves. The junior holds a 3.25 ERA, 28 strikeouts and a 1-2 record over 24 IP over 22 games.
• Jack Jumper comes in with a 1.91 ERA, 2-2 record, two saves and 35 strikeouts in 37.2 innings pitched in 24 games.
• Georgia Southern enters the weekend 27-21 after taking only one of three from Troy at Riddle Pace Field.

• A-State trails the all-time series with Georgia Southern by a count of 5-8 with all 13 meetings coming since the 2015 season when the Eagles joined the Sun Belt Conference. All of the meetings have come with Tommy Raffo as head coach of the Red Wolves.
• The two teams split four meetings in the 2015 season with Georgia Southern taking two of three in Statesboro March 20-21 before A-State defeated the Eagles in the SBC Tournament on May 21. A-State won game one of the series March 20 by a score of 3-1 in 13 innings in a game that saw A-State set the school record for strikeouts with 21. Tyler Zuber re-corded the first 11 outs of the game via strikeout before ending the night with 13 overall. However, the Eagles won the firstgame of the March 21 doubleheader 3-2 in 11 innings before winning game two 6-3. Chandler Hawkins pitched 7.2 innings in the 6-1 Red Wolves win in the SBC Tournament that gave head coach Tommy Raffo his 200th career
win May 21, 2015.
• In 2016, the Eagles made their first trip to Jonesboro March 24-26 and came away with a 2-1 series victory. GeorgiaSouthern won game one 8- 3 behind a strong outing from Evan Challenger, who allowed three runs in 7.2 innings on six hits with two walks and 10 punch outs. A-State was able to win game two 6-5 when Tanner Ring hit a walk-off single in the bottom of the ninth to score Tim Seldomridge. Ring led the team with three hits and two RBI, while Coulton Lee earned the win on the mound. A-State scored four runs off starter Chase Cohen, while Chris Brown took the loss by failing to get an out in the ninth inning and giving up Ring’s hit. However, the Red Wolves lost game three 9-7 and were out
hit 13-4 in the game.
• In 2018, A-State lost two of three to the Eagles in Statesboro, Ga., May 12-14 before making the trip back to Statesboro a couple of weeks later for the conference tournament. The Red Wolves lost the opener 7- 4 despite a quality start from TylerMitzel and 2-for-3 effort from Derek Birginske, including his first career home run. A-State won a pitcher’s
duel in game two 1-0 after Drew Tipton singled home the winning run in the top of the ninth. Bradey Welsh went the first six innings for the Red Wolves before Tyler Zuber entered and went the final three with all nine outs he recording coming on strikeouts. Chase Cohen went six shutout innings for the Eagles. The Red Wolves lost the finale 6-1 with
Justin Felix representing the only A-State player with more than one hit in the game.
• Last season, the Red Wolves only took one game away from the Eagles at Toomlinson Stadium. In the first game, DrewTipton delivered a walk-off double in the bottom of the tenth inning for the Red Wolves to take the match 6-5. in the secondgame, The Arkansas State baseball team fell behind 8-0 after two and a half innings and couldnt find a way to comeback ultimately falling 10-5. In the series finale, A-State fell 4-1.

Original article source: http://www.astateredwolves.com//ViewArticle.dbml?DB_OEM_ID=7200&ATCLID=211802905 | Article may or may not reflect the views of KLEK 102.5 FM or The Voice of Arkansas Minority Advocacy Council

Story Links JONESBORO, Ark. (6/9/20) – The Arkansas State baseball program announced Tuesday that the dates have been set and registration is now open for the 2020 Tommy Raffo baseball camps. "We are Read more