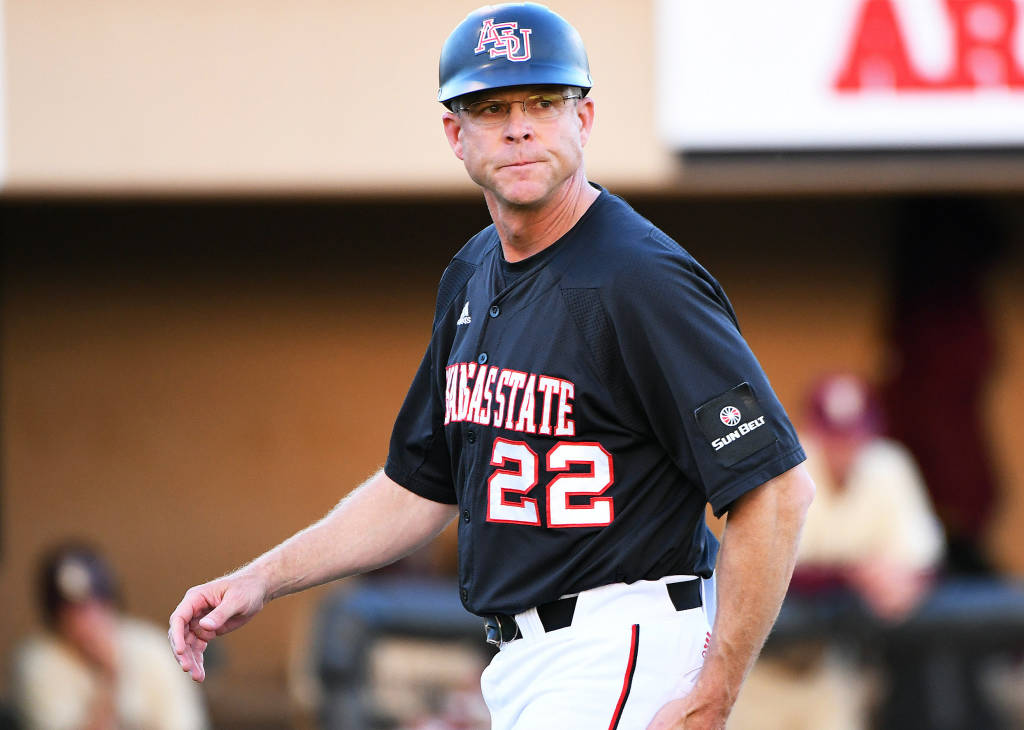 • Arkansas State and Southeast Missouri played in the 1967 NCAA Midwest Regional of the College Division with A-State claiming a 12-6 decision. The Red Wolves defeated the Redhawks in 1968 6-1, but didn’t resumethe series for 20 years until SEMO took two games in 1988.
• The two teams have played every season since 1988 with the Redhawks holding a 27-26 advantage.

• The series has been very even lately with head coach Tommy Raffo holding a 9-9 mark against SoutheastMissouri in his career since he took over as head coach in 2009.
• In 2018, The Arkansas State baseball team allowed Southeast Missouri to tie the game in the top of the ninth, but Jacob Jablonski was hit by a pitch with the bases loaded in the bottom half to send A-State to a
7-6 victory. Nate Alberius posted a quality start with 6.1 innings pitched and three earned runs allowed outof four total. The Little Rock, Ark., native struck out two and walked two before giving way to Payton Lannon, who earned his first hold of the season. He pitched a full inning with two huge strikeouts to end the seventh frame after SEMO had runners on second and third with one out. Jeremy Brown drove in A-State’s first run with a sacrifice fly in the third before a bases-loaded hit-by-pitch by Grant Hawkins brought in another. SEMO tacked on another run in the top of the fifth before Andersen’s triple to center brought home A-State’s third run. Andersen would come around to score on the play to tie it up at 4-4 after an errant throw to third by the Redhawks’ cutoff man, Connor Basler.

• in 2017, the two teams played on back-to-back nights with A-State claiming a 10-1 win April 4 in Jonesboro before losing a 10-4 contest in Cape Girardeau, Mo. Bradey Welsh pitched seven innings of one-run ball in the win for the Red Wolves as the team hit eight doubles, one shy of tying the school record, and scored six runs with two outs.

• Garrett Rucker led the offense with two hits and four RBI. The following night SEMO reliever Jared Waldhoff earned the win with 1.2 innings out of the bullpen as the Redhawks scored four runs in the bottom of the seventh to break a 2-2 tie. Chris Caffrey had two hits and three RBI for Southeast Missouri, while Justin Felix led A-State’s offense with two hits and two runs driven in.
• Southeast Missouri State in entering the mis-week contest 13-11 and 3-6 in the Ohio Valley Confernce Red-hawks are coming off an 2-1 home series loss to Austin Peay.

Original article source: http://www.astateredwolves.com//ViewArticle.dbml?DB_OEM_ID=7200&ATCLID=211797246 | Article may or may not reflect the views of KLEK 102.5 FM or The Voice of Arkansas Minority Advocacy Council