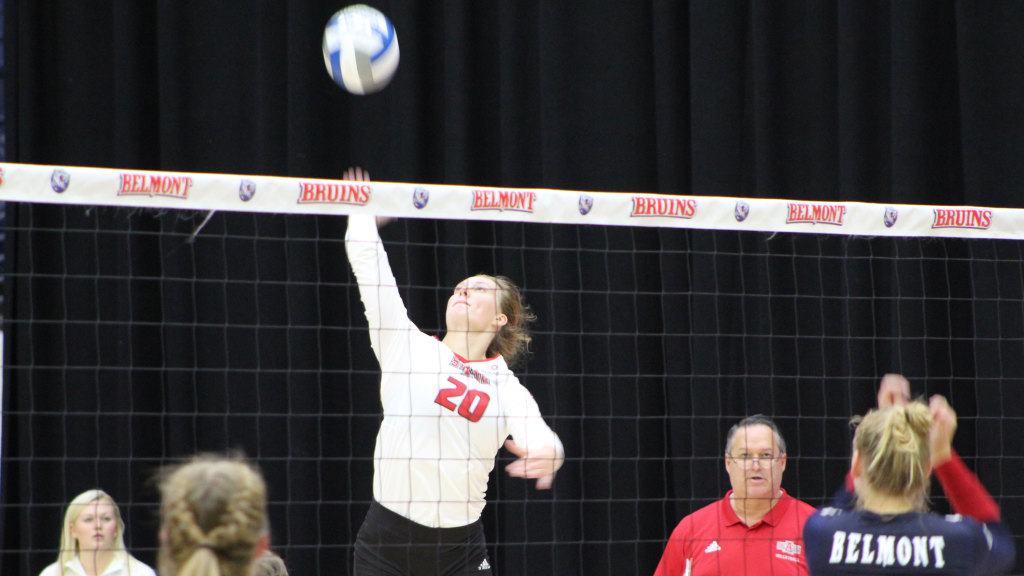 Seven Red Wolves combined for 39 kills, while Peyton Uhlenhake led the way behind the service line with a career-best four of the team’s seven aces to lead A-State (3-1) to its third-straight sweep in the streak. The performance also sparked a season-best attack percentage for the Red Wolves, who hit .310 as a team while holding the Golden Eagles (0-4) to a clip of just .151. For the fourth-straight match, A-State held an opponent to a sub-.200 mark.

Set 1 – A-State 25-19
The Red Wolves claimed their seventh straight set, but had to weather a fierce comeback from the Golden Eagles late in the frame. With A-State ahead 24-14, USM captured five straight points to cut the deficit to 24-19. A service error by Addie Ashton put out the fire, handing the Red Wolves a 25-19 decision in the set.

Macey Putt led the squad with five kills on a .273 attack percentage to go along with three digs and a block. Josie Stanford was tied for the set lead with a pair of blocks to her credit. Julianna Cramer dished out seven assists to lead all players.

Set 2 – A-State 25-14
In the second, the Red Wolves got out to a 5-1 lead, which would be an advantage that USM could not surmount. A-State’s largest lead of the set came at 21-9, although the Golden Eagles chipped away with a brief 3-0 run late to cut the deficit to 23-14. It would be too little too late, as a kill and subsequent ace by Uhlenhake sealed the set for the Scarlet and Black.

Timber Terrell, Madison Brown and Uhlenhake each collected four kills in the set. Eight of Cramer’s 18 assists came in the second set.

Set 3 – A-State 25-15
Southern Miss hoped to flip the script in the final set, taking an early lead, but the Red Wolves countered by continuing their offensive success to take the lead for good at 4-3 on a kill by Brown. A-State took advantage of eight attacking errors by USM, which helped pad the lead that would grow to as much as nine before a final error by USM’s Addie Ashton finished the match.

Malgorzata Andersohn led the A-State attack in the final frame, notching five of her 11 assists in the contest.

In the match, Kendahl Davenport matched her season-high with four kills to go along with a pair of blocks – one solo.

The Red Wolves will return to action bright and early Saturday morning, facing undefeated Southeastern Conference foe Mississippi State (4-0) at 10 a.m., followed by their weekend finale at 5 p.m. against New Orleans. The Bulldogs defeated the Privateers, 3-1, in the tournament opener earlier Friday.

Original article source: http://www.astateredwolves.com//ViewArticle.dbml?DB_OEM_ID=7200&ATCLID=211811021 | Article may or may not reflect the views of KLEK 102.5 FM or The Voice of Arkansas Minority Advocacy Council