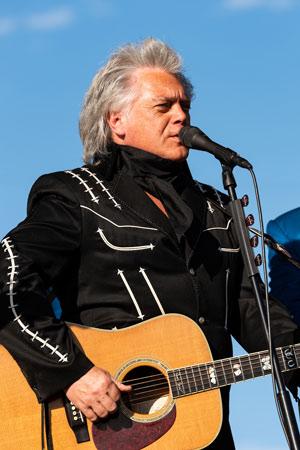 JONESBORO — The 2021 virtual Johnny Cash Heritage Festival is pleased to welcome back three past festival performers, Marty Stuart, Ana Cristina Cash, and John Carter Cash.  John Carter co-founded the festival along with his sister Rosanne and has hosted the festival a number of years, most recently in 2018 where he also performed alongside his wife Ana Cristina.  Marty Stuart was a featured performer in the 2019 festival.

“We are excited to welcome back these three amazing performers,” said festival director Dr. Adam Long.  “All three have joined us for past festivals and were crowd favorites.  We’re honored to have them perform again.”

The three will join a group of 14 other artists who will be performing exclusive versions of Johnny Cash songs throughout the two-day festival.  The festival will also include presentations and demonstrations by an international panel of speakers, as well as the first-ever concert from inside the Johnny Cash Boyhood Home, featuring Rosanne Cash.

The festival is scheduled to stream Friday and Saturday, Oct. 15-16.  More information can be found at JohnnyCashHeritageFestival.com.

His career began at age 12 when he started playing mandolin with the bluegrass group The Sullivan Family. He then moved to Nashville to join Lester Flatt and the Nashville Grass at the Grand Ole Opry. After Flatt’s death, Stuart landed a job performing with the Johnny Cash band. After more than six years with Cash, Stuart put together his own band.

Stuart is an eclectic performer, transitioning between honky-tonk, rockabilly, traditional country and bluegrass. He is considered one of country music’s most historically minded “new” traditionalists, recording and releasing relevant music that honors country’s rich legacy while advancing it into the future.

Rolling Stone magazine calls him one of the top country music artists of all time.

John Carter Cash has been involved in music all his life, beginning as a music producer with his mother June Carter Cash on her CD, “Press On,” which won a Grammy in 1999. He then went on to work with Rick Rubin as associate producer on his father’s Grammy-winning records “American III: Solitary Man” and “American IV: The Man Comes Around,” the latter receiving three Country Music Association awards.

He also produced his mother’s record “Wildwood Flower,” which won a Grammy for best traditional folk album in 2003. His 2004 production “Unbroken Circle: The Musical Heritage of the Carter Family” received three Grammy nominations. John Carter is also co-producer on Stuart’s album, “Badlands.” His production on Billy Joe Shaver’s “Everybody’s Brother” helped earn a Grammy nomination in 2007. He has worked extensively with Loretta Lynn since 2008, co-producing over 100 songs for the country legend.

John Carter’s first album of his own music, titled “Bitter Harvest,” was released only to the international market in 2003. His 2010 album, “The Family Secret,” received a three-star review in Rolling Stone and his latest album, “We Must Believe in Magic,” was released in the spring of 2017.

He is the author of three children’s books, Momma Loves Her Little Son, Daddy Loves His Little Girl, and The Cat in the Rhinestone Suit. He wrote his mother’s biography, Anchored in Love, and House of Cash: The Legacies of My Father Johnny Cash on his personal relationship with his father. His first novel, a fantasy titled Lupus Rex, was released in June of 2013.

He owns and operates Cash Cabin Enterprises, LLC in Hendersonville, Tenn., the same studio where his father recorded years ago.

Ana Cristina Cash is an American singer-songwriter, raised in Miami, Fla., as the daughter of Cuban immigrants.   Her recordings exhibit a broad vocal range, spanning from contralto to a high coloratura soprano known to some as a “whistle register.”

She started her professional music career at age six on the variety show, “Sabado Gigante.”  At age 16 she signed to Sony Music’s Latin division and released her first album “Ana Cristina” in the Spanish language. Her latest album, “The West Coast Sessions,” was released in May 2015.

In 2005, at age 19, Ana Cristina became the first Hispanic in history to perform the “Star Spangled Banner” at a Presidential Inauguration. The following year she was invited to perform at the White House for the President of the United States, the Crown Prince of Spain and notable world ambassadors.  She also has performed the national anthem for various live national broadcasts including NBA, MLB and NFL.

Registration and ticket sales are currently available at JohnnyCashHeritageFestival.com.

Ticket prices are $35 plus applicable fees for the full virtual festival. A $75 VIP ticket includes the entirety of the virtual festival and an in-person event on the campus of Arkansas State on the evening of Oct. 15. This in-person event will feature live music, food and drink, and a screening of the concert from the boyhood home.

Original article source: http://www.astate.edu/news/award-winning-performers-return-to-johnny-cash-heritage-festival-lineup | Article may or may not reflect the views of KLEK 102.5 FM or The Voice of Arkansas Minority Advocacy Council