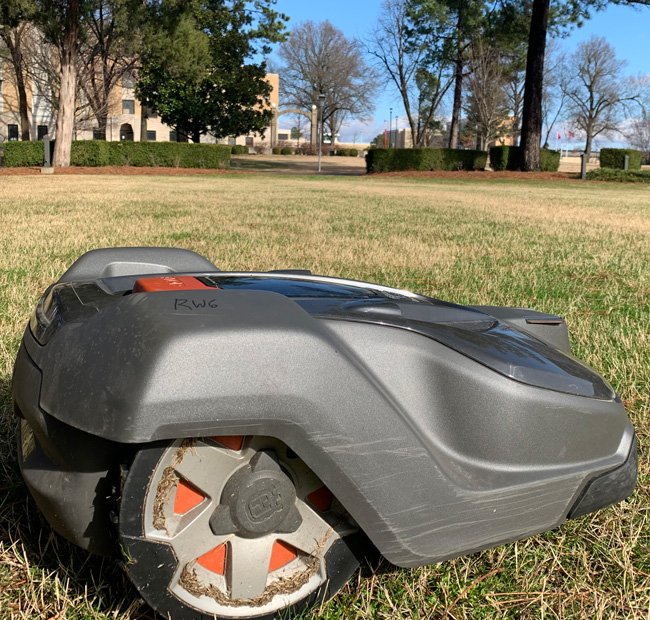 JONESBORO – The open spaces of Arkansas State University’s campus have a new creature competing for the attention of the squirrels and students – autonomous lawn mowers.

Deployment of three Husqvarna automowers began over the holiday break as a way to more efficiently and effectively keep the lawns of A-State maintained.

Vince Patterozzi, the new director of Landscape Services for A-State, expects the program to expand in the coming months.  The rechargeable mowers operate in a similar manner to autonomous home vacuum cleaners.

“They operate continuously for four and a half hours mowing, one hour charging, 24 hours a day, seven days a week,” Patterozzi said.  “It creates a number of efficiencies and savings.  Since they are electric there are hundreds of gallons of fuel saved.  They also reduce the amount of air and noise pollution on campus.  They cost between $10 to $50 per mowing season to operate, depending on how much electricity costs to charge the batteries.”

Each of the current units have an 11-inch mowing width.  Three are deployed now, with three more set to join later this spring.  In the future, Landscape Services is looking into adding 33-inch mowers to the fleet.

The automowers use a GPS wire-guided technology to navigate the area they are assigned to mow.  Each unit has a home docking and charging station.  A mobile app allows Patterozzi and his team to communicate with the units.

“Let’s say we have a severe weather alert,” he said.  “We can pull up the app and tell the units to ‘go home’ to their base station, shut down and wait until the weather passes.  Then we can tell the units to resume their mowing sequence.”

Curious campus residents are encouraged to not disturb the mowers, but if one gets into a bind or is picked up, it will immediately “phone home” to Patterozzi through the mobile app.

“Each unit has an anti-tampering/anti-theft alarm that goes off if the unit hasn’t been shut down appropriately,” he said.  “They also alert us if the unit has stopped more than 90 seconds.  So if anyone sees a unit stalled, one of our trained ground crew is probably already on the way to resolve whatever issue stopped the mower.”

Three units – RW-1, RW-2 and RW-3 – are in current operation.  One is working the green space east of the Dean B. Ellis Library, another on the pedestrian mall area south of Humanities and Social Sciences building and another south and east of the Administration building.  The next three are expected on the east end of the quad, near Bookout Circle and other open spaces near HSS.

While the “mowing droids” are new to the A-State area, Husqvarna introduced the first automower in Europe in 1995, and millions of the units are currently operating around the world.

No comment was available from A-State’s significant on-campus squirrel population.

Original article source: http://www.astate.edu/news/autonomous-lawn-mowers-now-working-on-campus | Article may or may not reflect the views of KLEK 102.5 FM or The Voice of Arkansas Minority Advocacy Council