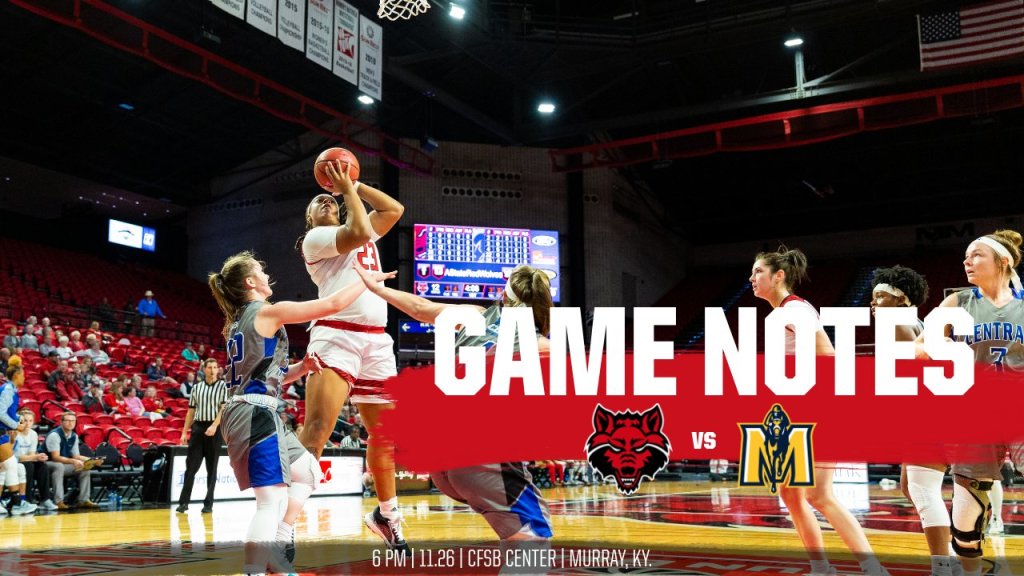 • The Red Wolves continue their four-game road stretch to end November at 6 p.m. on Tuesday, taking on Murray State inside the CFSB Center. The game can be seen on ESPN+ while the radio broadcast will air on 95.3 The Ticket.

• A-State is playing Murray State for the second year in a row (W, 74-63 in Jonesboro in 2018) and is searching for its seventh straight win in the series. Overall, Arkansas State leads the series 19-8, but Murray State has a 5-2 record in Murray.

• Morgan Wallace earned All-Tournament honors this past weekend at the Maggie Dixon Classic after leading the Red Wolves with 37 points and 12 rebounds over two games, including a career-high 21 points vs. the Blue Demons (11/22). Since starting the season averaging 5.3 points per game, Wallace has averaged 18.5 the last two.

• A-State has had three or more players score in double figures in three of its five games this season.
• Jada Ford moved into a tie for ninth all-time in three-pointers made (137) with four vs. North Carolina A&T on Saturday.
• Arkansas State is one of four teams in the Sun Belt Conference with four or more players averaging 10.0 points or more.
PDF Version

Original article source: http://www.astateredwolves.com//ViewArticle.dbml?DB_OEM_ID=7200&ATCLID=211816501 | Article may or may not reflect the views of KLEK 102.5 FM or The Voice of Arkansas Minority Advocacy Council