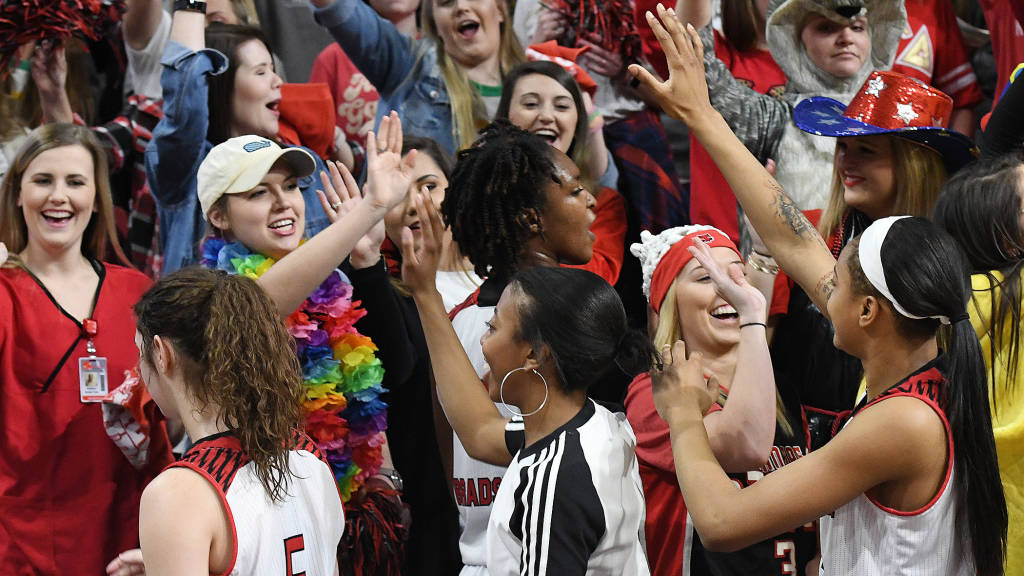 Buchanan brings a wealth of experience to the Red Wolves in a 26-year career that includes head coaching stops at Montevallo, Houston Baptist, Houston and most recently Allen Community College. He has helped teams win six conference or tournament championships, participated in the three NCAA tournaments, one WNIT and two NAIA tournaments.

“We are very fortunate to add someone with the years of experience and success, that Todd has, to our staff,” Boyer said. “He has been a consistent winner as both an assistant coach and head coach at all levels. Our program will benefit greatly from his relationships and connections throughout the country.”

Bradshaw recently completed a four-year playing career at Arkansas State where she became the school’s all-time leader in blocked shots with 176 (previous record was held by Adrianne Davie with 132) and ranked among the best in the Sun Belt Conference in free throw percentage.

“Lauren, was a tremendous leader and spokesperson for our team,” Boyer said. “She has always had a caretakers mentality in that she would go out of her way to take care of her teammates. Lauren takes great pride in Arkansas State University and the success of our program.”

Buchanan has played a vital role in the recruitment and development of numerous players who have elevated their basketball skills to successful professional careers both in the WNBA and overseas. Most notably, he helped former Houston Cougar standout Sancho Lyttle become the No. 5 pick in the 2005 WNBA draft. Just a year earlier, Buchanan coached another Cougar standout, Chandi Jones, who was the eighth pick in the 2004 WNBA draft.

In his first season leading the Houston women’s basketball program in 2010-11, Buchanan posted an overall record of 26-6, marking the second-most wins in school history, while storming through Conference USA with a perfect 16-0 mark in regular season play, becoming only the second team in league history to achieve the feat.

Buchanan also returned the Cougars back to national prominence as Houston earned an at-large bid to the NCAA Tournament and cracked the top 25 polls for the first time since the 2004-05 season.

Prior to his time with the Cougars, Buchanan was the person in charge of the Houston Baptist women’s program where his team won a Red River Athletic Conference regular-season championship, a pair of RRAC Tournament titles and finished in the top 25 twice, including a No. 6 ranking to end the 2005-06 campaign. The Huskies boasted numerous All-America and Academic All-America selections during his tenure.

During her career, Bradshaw helped the Red Wolves to back-to-back WNIT appearances in the 2014-15 and 2015-16 seasons. During her sophomore season in 2015-16, A-State had perhaps the best the season in program history and set school records in wins (27), consecutive wins (18), field goal percentage (45.0), scoring margin (14.5) and tied the mark most home victories in a season (14). The squad shattered the mark for regular season wins with 25 and won its second regular season SBC championships since 2013-14. The team received national recognition for its accomplishments and was ranked in the top-10 of the College Insider and ESPN Mid-Major polls throughout the year. A-State also received votes in both the Associated Press (AP) and Coaches’ poll through much of the regular season.

During the historic season, Bradshaw appeared in 33 games and made three starts, while averaging 14.8 minutes. Perhaps more impressive, she compiled 53 blocks, which at the time was the third most in a single season in school history (she would go on to block 56 shots in her junior season for the second-most in program history).

Original article source: http://www.astateredwolves.com//ViewArticle.dbml?DB_OEM_ID=7200&ATCLID=211769059 | Article may or may not reflect the views of KLEK 102.5 FM or The Voice of Arkansas Minority Advocacy Council