#AStateVB Gears up for NIVC
0 Comments 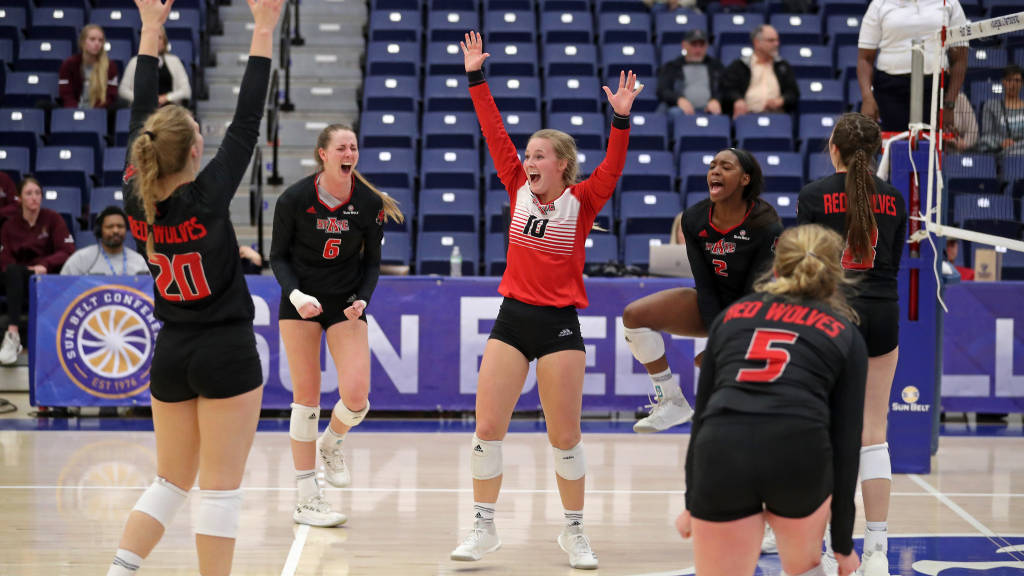 This season is the 44th year of volleyball at A-State and the home team has an all-time mark of 1,041-529-5 (.658) and had the 19th most wins in Division I and was tied for the 25th best winning percentage in Division I history entering the 2018 campaign.
Arkansas State finished the regular season 17-12 and 9-7 in sun Belt action. The Red Wolves competed in the Sun Belt Tournament where they defeated South Alabama 3-2 and earned a 3-1 win over thrid seed Coastal Carolina. However, A-State fell to second seed Appalachian State 1-3, ultimately ending the season 19-13.
The Red Wolves stand at third in the Sun Belt with an average of 1.32 service aces per set, while ranking fourth in kills, assists and opponent hitting percentage with 13.02, 12.31 and .191 per set.
Senior Carlisa May took over the No.1 spot on A-State’s all time career list passing Margie Kolat (1991-94) who had 1,789. May currently has 1880 kills on her career. The Lee’s Summit Mo, native is just 20 kills away from reaching the 1,900 mark.
May currently ranks sixth in the nation with 563 kills on the year, while also checking in at 11th in the nation with 4.77 kills per set.
Among active players in all of Division I volleyball, May ranks second with her career kills total, and ranks fifth among active players across all divisions.
Ellie Watkins ranks 40th in the nation, and third in the Sun Belt, with 1,160 total assists on the season.
She is also 72nd in the nation with 10.42 assists per set.
Senior setter Ellie Watkins has quickly become one of the school’s most dominant setters and has broke into the school’s all-time career sets list in just her two seasons at A-State. Watkins currently has 2,156. career assists and is now chasing No. 9 Shelly Kirby who handed out 2,343.
Tatum Ticknor has reacently joined the 1,000 club in digs on her career in a 3-0 win over ULM Friday, Nov. 9.
The 2018 postseason competition marks Arkansas State’s second-straight NIVC appearance, with the Red Wolves defeating Southern Illinois-Edwardsville before falling to 2017 champions Ole Miss in the second round last season.
Tulane and A-State have met six times in series history, the first being in 1976 with the last in 1992. The Green Wave and the Red Wolves post an even opponent record, with each team going 3-3 at neutral sites.

The A-State Tulane all-time series record is even at 3-3. The last meeting took place in 1992 where, the Red Wolves took a 3-0 win over Tulane. The Red Wolves are currently on a three-game win streak.
Tulane finished the regular season with a third-place standing in the American Athletic Conference after having been selected 10th in the preseason coaches poll. An 11-match winning streak sent the Green Wave on a successful run, with the team winning 13 of its final 14 matches, earning Tulane an automatic bid to the NIVC.
Tulane led the conference defensively with an opponent hitting percentage of .150 in the regular season while standing at sixth in the nation. The team ranks second in the conference in blocks, assists and service aces, tallying 2.55, 13.13 and 1.46 per set, while also ranking third in kills with an average of 13.71.
Only one of 32 participating teams in the postseason tournament has a higher RPI than the Green Wave, with Iowa State (16-13, 9-7 Big 12) checking in at No. 60 and Tulane just one behind at 61.
Junior right side hitter Erika Hansel and senior middle hitter Dayna Kern each earned spots on the First Team All-Conference this season, with Hansel being just one of three in the AAC to have earned a unanimous selection.
Junior libero Kaylie McHugh broke the conference single-season service aces record this season, totaling 56 this year. McHugh checks in at seventh in the nation and leads the AAC with an average of 0.46 aces per set, while also ranking eighth in digs with an average of 4.34 per set and a total of 529 this season.
Kern led the conference in blocks, totaling 131 with an average of 1.22 per set, while also checking in at third with a .310 hitting percentage.
The winners of each match will face off on Friday at 7 p.m. in New Orleans, competing for a spot in round three of the tournament.
This is the second straight appearance for head coach David Rehr’s squad in the NICV after it defeated Southern Illinois-Edwardsville during in 2017 before falling to Ole Miss in the following round. Overall this will be the fifth appearance for A-State in the NIVC and it has compiled a 9-8 record all-time in the event.

Original article source: http://www.astateredwolves.com//ViewArticle.dbml?DB_OEM_ID=7200&ATCLID=211782096 | Article may or may not reflect the views of KLEK 102.5 FM or The Voice of Arkansas Minority Advocacy Council