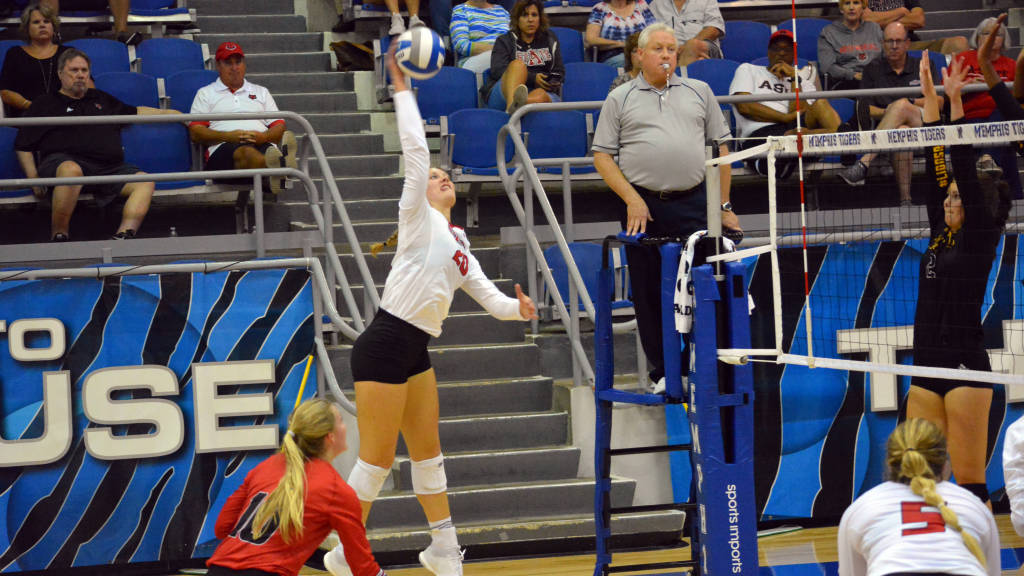 NC State led set three 22-18 and looked poised to sweep the match, but A-State ended the game on a 7-1 run, capped by a kill from Madison Turner, to get on the board with a 25-23 set win. The team fell behind early in set four 10-7 to the Wolfpack, but battled back to take a 20-19 edge and wouldn’t relinquish the lead in a 25-22 set four win to force a decisive fifth set.

A-State fell behind 5-2 in set five, but a 4-0 run, finished with a block by May and Timber Terrell, put the Red Wolves ahead 6-5. However, the set went back-and-forth with NC State going ahead 13-11 to force a timeout by the Red Wolves. A kill by May and block from Ellie Watkins and Terrell out of the timeout tied the frame at 13-13, but NC State won the next two points to win 15-13 and take the match from Arkansas State 3-2.

“We started playing disciplined defense at the end of set two and it carried over into sets three and four when we tied it up,” A-State head volleyball coach David Rehr said. “However, set five is always a toss-up. I’m proud of the fight, but we can’t fall behind 0-2 and expect to win many matches.”

May eclipsed 20 kills for the first time this season with 21 and had a career-best 14 digs for her second double-double, while Putt put together her first career double-double with 10 kills and 10 digs. Turner added seven kills on a team-best .417 hitting percentage, while Terrell posted a career-high eight blocks as A-State out blocked NC State 12-9. Tatum Ticknor recorded 20 digs, and Watkins handed out 40 assists. Melissa Evans had 16 kills for NC State, who hit .207 to A-State’s .146.

Original article source: http://www.astateredwolves.com//ViewArticle.dbml?DB_OEM_ID=7200&ATCLID=211770264 | Article may or may not reflect the views of KLEK 102.5 FM or The Voice of Arkansas Minority Advocacy Council