@AStateVB Bounces Back with Wins Over SEMO and Providence
0 Comments 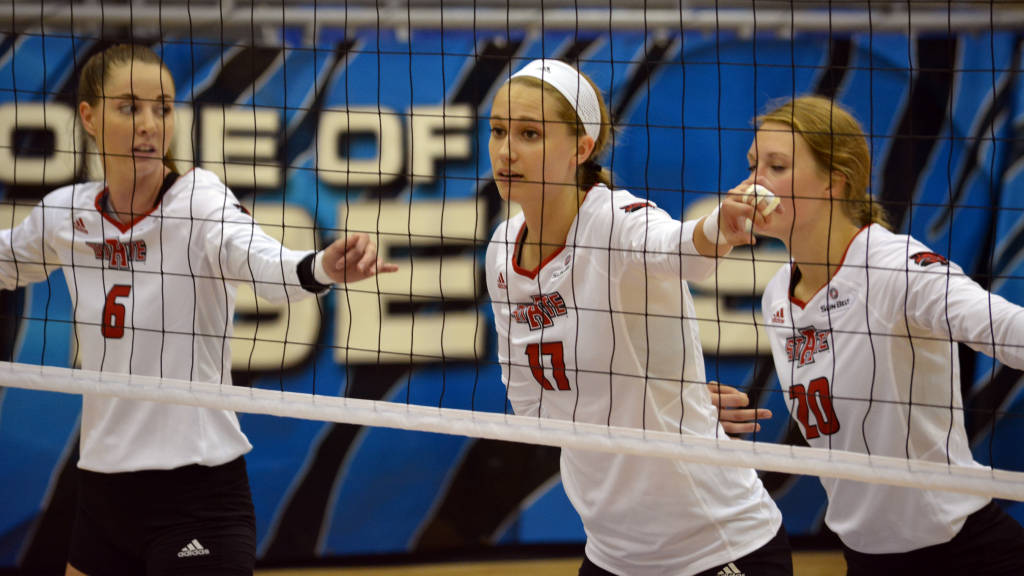 A-State (4-5) dominated the first set against Southeast Missouri (6-3) by jumping out to a 21-10 advantage after a kill by Carlisa May. The Red Wolves would go on to win the set 25-15 after an attack error. However, the Redhawks led 16-11 in set two to force an Arkansas State timeout before A-State battled back to within 23-21. SEMO was able to earn the last two points after a stoppage to win the set 25-21 and even the match.

The third set was tied 15-15 through 30 points and remained closely contested with the score tied 21-21 before the Red Wolves ended the frame on a 4-0 run, capped by a block from Isabel Theut and Madison Brown, for a 25-21 win. Southeast Missouri began set four strongly with a 16-11 edge, but Arkansas Sate rallied to within one at 20-19 before ultimately falling 25-22 to force a fifth set.

SEMO went ahead 7-5 in the decisive fifth game to force an A-State timeout and led 12-10 after a block. Despite the Redhawks seemingly poised to take the match, the Red Wolves unleashed a 5-0 run, including two kills from May, to stun SEMO 15-12 and take the match 3-2.

“This was a good day for us, obviously with the wins, but we fought hard,” A-State head volleyball coach David Rehr said. “We could have folded in the fifth set to SEMO when we fell behind, but we didn’t. We showed a lot of fight to win that one and then we could have used the excuse that we were tired playing two in a row, but we came out and played really solid against Providence.”

May posted a season-high 22 kills in the win over Southeast Missouri and also had 11 digs for her third double-double of the year, while Madison Turner and Theut posted a season-best 10 kills apiece. Turner recorded her 10 kills on a career-high .769 hitting percentage and also had a career-best seven blocks. Ellie Watkins registered a double-double with 48 assists and 10 digs, while helping A-State to a .252 hitting percentage against SEMO’s .182 mark.

“I have to commend the play of Isabel (Theut) because she’s been forced into action due to some injuries we currently have and she played great today,” Rehr continued. “The whole team stepped up in some ways after we hit, what we hope is, our rock bottom earlier. Hopefully this is the bounce back up and we keep improving.”

The Red Wolves and Friars (5-3) battled through 24 points to a 12-12 tie, but a service error gave A-State the edge 13-12 with the team never letting it go the rest of the opening frame. The Scarlet and Black moved in front 20-17 on a kill by Macey Putt to force a Providence timeout and went on to clinch the set by a score of 25-21.

The second set was tied 9-9 before a 7-1 run put A-State on top 16-10 with the Friars using a timeout to try and stop the momentum. However, the stoppage did little to slow the Red Wolves down with A-State pushing its advantage to seven points a number of times, including the final tally of 25-18 when a kill by May ended the frame.

A-State got off to a fantastic start in the third and, what proved to be, final set with a 9-2 lead. The Red Wolves led 17-11 when Providence called their second and final timeout of the set, and the Friars were able to use a 7-3 run to cut into their deficit to make the score 20-18. Providence wasn’t able to get any closer as Arkansas State used a 5-2 run, capped by a kill from Peyton Uhlenhake, to win the set 25-20 and the match 3-0.

May led A-State with 17 kills, while Putt was in double digits with 10 as A-State hit .275 to Providence’s .162. Watkins tallied her second double-double of the day, and third straight overall, with 37 assists and 12 digs. Defensively, Tatum Ticknor led the team with 13 digs, while Turner and Putt both had three blocks apiece. Providence was led by Allison Impellizeri’s 10 kills.

Arkansas State closes out action at the Kangaroo Classic with a match against SIUE. First serve against the Cougars is set for 3:30 p.m.

Original article source: http://www.astateredwolves.com//ViewArticle.dbml?DB_OEM_ID=7200&ATCLID=211771079 | Article may or may not reflect the views of KLEK 102.5 FM or The Voice of Arkansas Minority Advocacy Council