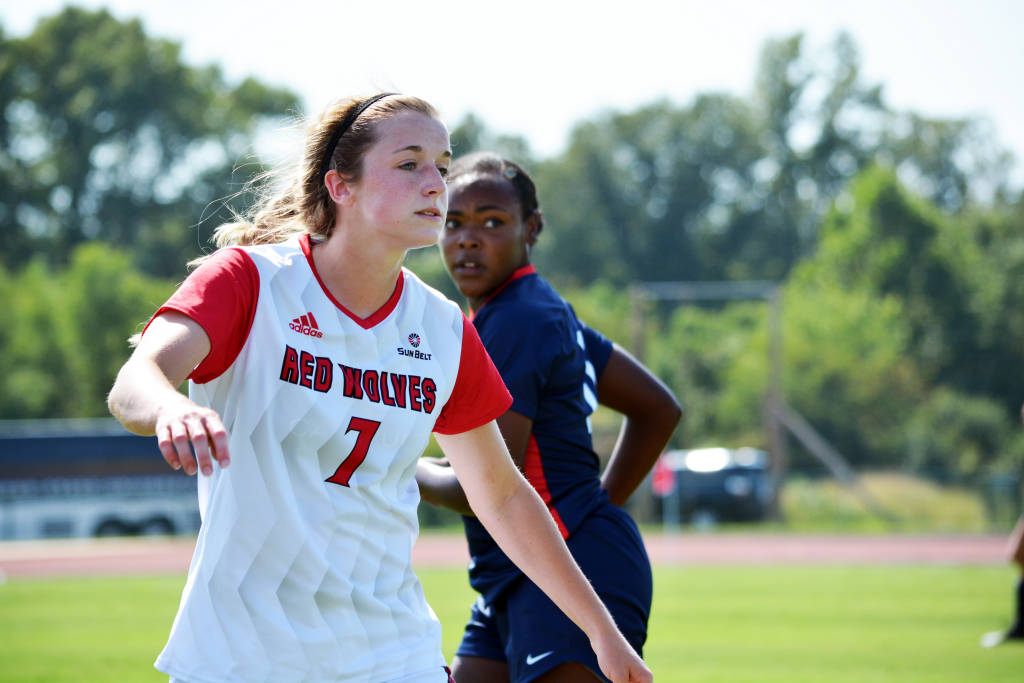 Jonesboro, Ark. (9/5/19) – The Arkansas State Soccer team scored the most goals since the 2014 campaign, as the squad defeated Jackson State 6-1, Thursday evening at the A-State Soccer Park.

Following the win, the Red Wolves improved to 3-1 on the year, while Jackson State fell to 0-4.

Cape Coral, Fl, native Sophia Restrepo found the back of the net in the 11thminute, earning her second goal of the season, giving the Red Wolves a 1-0 advantage over the Tigers. The goal was setup by Senior Abby Harris, who sent a perfect ball to the box which found the foot of Restrepo.

Freshman goal keeper Noel Miller made two saves, while Arkansas State out shot Jackson State 17-6 on the match as it took 11 shots on goal compared to the Tigers’ 3.

Sarah Sodoma scored in the 14th minute, when she was able to weave through multiple defenders to set up an excellent look on target, to put the Red Wolves ahead 2-0. The Manchester, Mo., native struck again, in the 27thminute, when she connected her second assisted goal of the match from 10 yards out, to give the Scarlet and Black a 3-0 advantage over the Tigers.

Sodoma took over the third spot in program history after earning 42 career points while also moving into the fourth place with 17 career goals. She registered the eighth hattrick in program history, in the 69thminute, as Linsey Brochu was credited with the assist.

Maggie Ertl added insurance to the Red Wolves lead 4-0, in the 50thminute, when Abby Glockzin sent a flawless assist just inches in front of Ertl. Ertl then dribbled down the field shaking multiple Tiger defenders, sending the ball right over the head of the Jackson State goal keeper. Haley Furio added to the A-State lead 6-1, in the 69thminute.

Arkansas State will return to action Sunday, Sept. 8, when it travels to Lubbock, Texas to face big 12 opponent Texas Tech. Kickoff is set for 1 p.m. at the John Walker Soccer Complex.

Original article source: http://www.astateredwolves.com//ViewArticle.dbml?DB_OEM_ID=7200&ATCLID=211810951 | Article may or may not reflect the views of KLEK 102.5 FM or The Voice of Arkansas Minority Advocacy Council