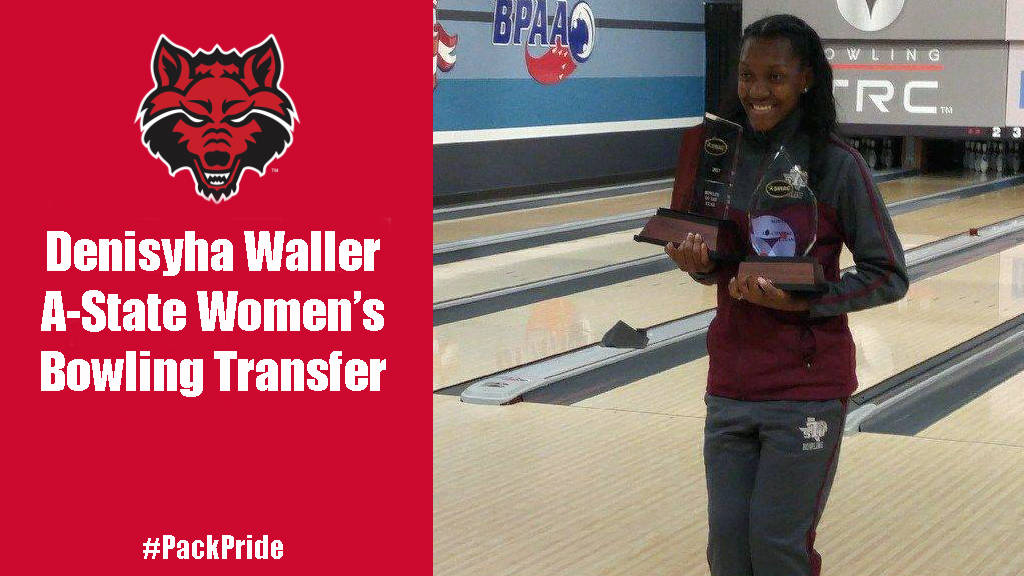 JONESBORO, Ark. (7/2/18) – The Arkansas State women’s bowling team announced Monday that Denisyha Waller has transferred into the program and will bowl her senior season for the Red Wolves.

A native of Markham, Ill., Waller joins the A-State women’s bowling program after three years at Texas Southern University. She was the Southwestern Athletic Conference (SWAC) Bowler of the Year in the 2016-17 season and is a two-time First-Team All-SWAC honoree (2016-17 and 2017-18). Additionally, she was named to the All-SWAC Second Team as a freshman in 2015-16.

“Adding Denisyha gives us some much needed experience,” A-State head women’s bowling coach Justin Kostick said. “With us only bring three players back from last season it’s nice to add someone who will have senior leadership.”

Waller helped the Lady Tigers to two straight SWAC championship matches in 2017 and 2018 with the team winning the 2018 title and an automatic bid to the NCAA Tournament. She shot a 300 game with a high series of 725 and was a team captain for the last two seasons at Texas Southern.

The daughter of Dennis and Christine Waller, she prepped at Hillcrest High School in Country Club Hills, Ill., and was a four-time All-South Suburban Blue Conference Tournament team selection. She also was a three-time Illinois High School Association Individual Sectional Qualifier during her high school career.

Waller joins an A-State bowling squad that went 88-36 a season ago and made its 11th straight NCAA Tournament appearance.

Original article source: http://www.astateredwolves.com//ViewArticle.dbml?DB_OEM_ID=7200&ATCLID=211733459 | Article may or may not reflect the views of KLEK 102.5 FM or The Voice of Arkansas Minority Advocacy Council