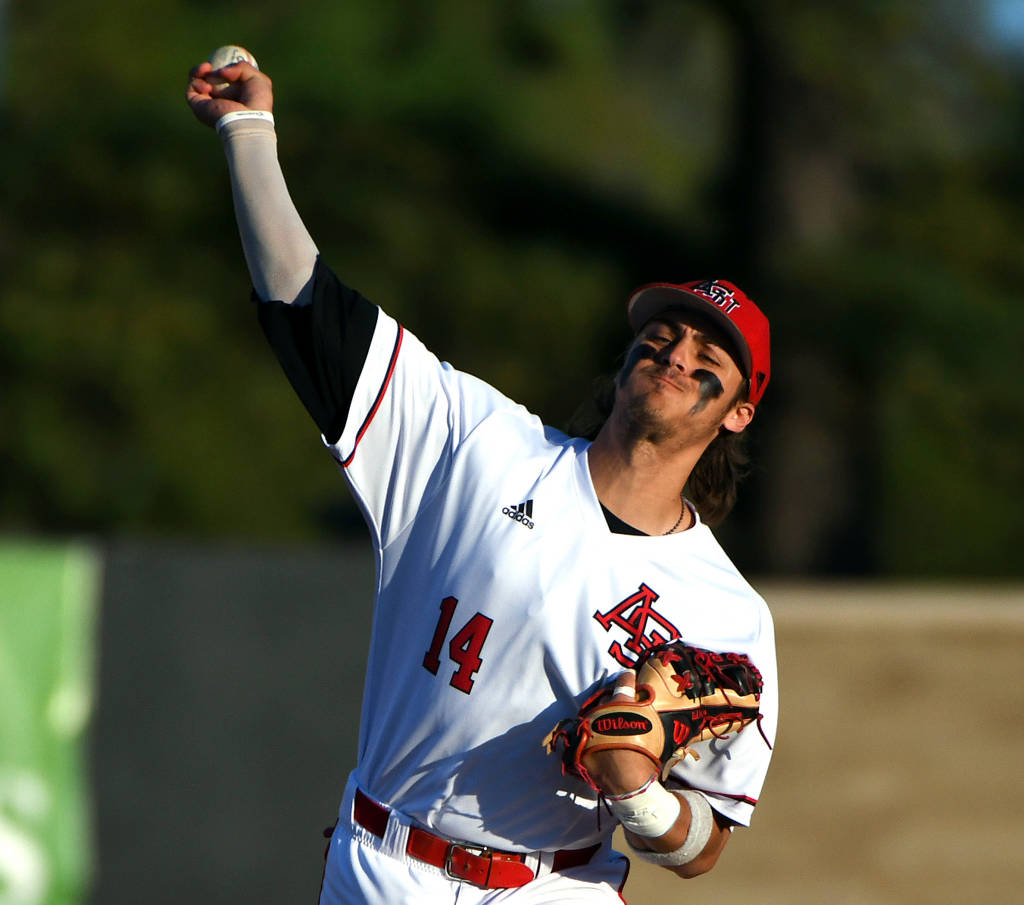 San Marcos, Tx. (4/19/19)– The Arkansas State baseball team stormed back from a seven-run deficit, with eight runs in the final two innings, but it wasn’t enough as the Red Wolves fell 16-14 on the road at Texas State Thursday evening.

Arkansas State clawed back from a seven-run deficit, in the eighth inning when it tacked on a seven-spot leveling the score at 13 runs apiece. The scoring rally begin when Justin Felix sent a three-run blast to right field and Tyler Duncan doubled to right center to welcome home Alex Howard. Duncan and Jacob Jablonski both scored on bases loaded walks while Jaylon Deshazier scored on a wild pitch.

Texas State bust the game opened in the sixth, when they tacked on four unearned runs. The Bobcats added three more in the seventh inning extending its advantage 13-6.

The Red Wolves took a 6-3 advantage over the home team, after posting a big fifth inning, when Drew Tipton sliced a single through the left side and Will Zimmerman sent a single through left scoring Deshazier. Kyle MacDonald capped off the inning when he ripped a two-run opposite field double through left.

However, Texas State responded in the home half, tying the match at 6-6, when John Wuthrich popped a three-run home run. Wuthrich finished the night two-for-five with four RBIs, two runs and a walk.

Arkansas State set the tone early, tacking on a two-spot in the second inning, when Justin Felix hit a triple to center field and Duncan popped up an RBI sacrifice fly to right center to welcome home Felix. Felix finished the night two-for-four with four RBIs, three runs, a triple and a home run while Duncan finished two-for-three with three RBIs, two runs and a double.

Texas State rallied in the third inning, punching in a three spot, after Jaylen Hubbard scored on a bases loaded walk, Jaxon Williams scored on a fielders and Will Hollis found home on a wild pitch.

Arkansas State will return to action Friday, April 18 when it competes in game two of its three-game series at Texas State. The first pitch is set for 6 p.m. at Bobcat Ballpark.

Original article source: http://www.astateredwolves.com//ViewArticle.dbml?DB_OEM_ID=7200&ATCLID=211800564 | Article may or may not reflect the views of KLEK 102.5 FM or The Voice of Arkansas Minority Advocacy Council