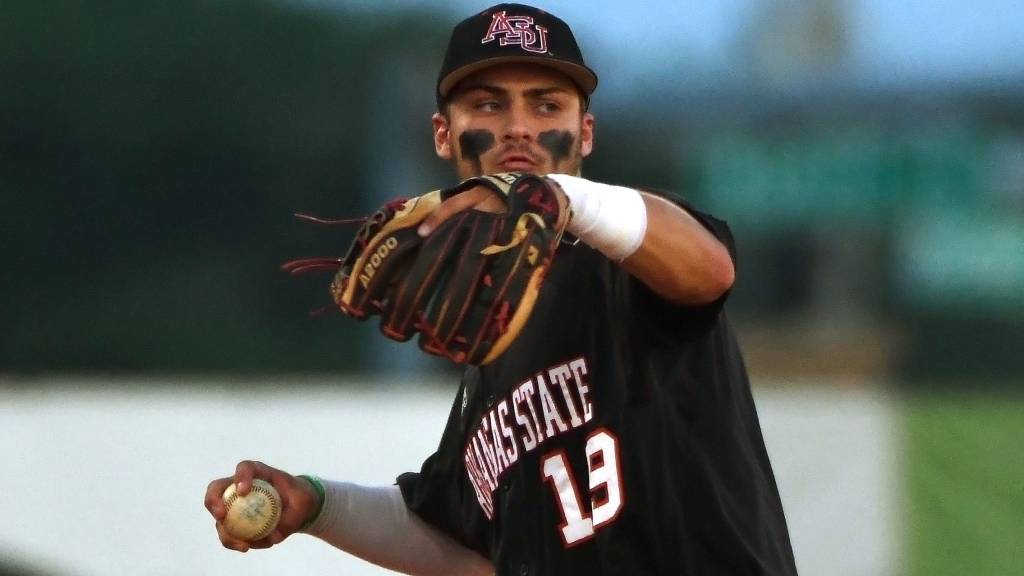 • Arkansas State is now 22-19 and 8-10 in the Sun Belt after dropping three-straight contest to Texas State and defeating Southeast Missouri State 8-4 in a midweek contest last Tuesday. The Red Wolves Mid-week match against SIU was cancelled due to inclement weather.
• The squad has now dropped eight-consecutive conference games following the series loss against Texas State at Bobcat Stadium.The Red Wolves haven’t dropped eight-consectutive confernce games since the 2008 campaign, when they dropped 11-straight.

• Tommy Raffo became the third head coach in Arkansas State baseball history to reach 300 wins and needs 13 more to pass Bill Bethea (1992-2002) for the second most wins in school history.
• Sky-Lar Culver enters the weekend matchup leading the team in a number of stat categories including a .342 batting average, RBIs (38), hits (53), doubles (13).

•The Arkansas State baseball team registered its best offensive game in school history, last season against ULM as the team scored a school-record 31 runs in a 31-7 victory over ULM. The 31 runs broke the school record of 28, which was set in a 28-13 win over Memphis to conclude the 1992 season, and A-State also tied the school records for home runs in a game (8) and hits (26).

• Last Season, the Red Wolves took one of three from the Warhawks in Monroe. A-State dropped the first game 2-0 before winning the second game 31-7 and dropping the series finale 4-0.
• In the second game of the three game series, The Arkansas State baseball team registered its best offensive game in school history as the team scored a school-record 31 runs in a 31-7 victory over ULM. The 31 runs broke the school record of 28, which was set in a 28-13 win over Memphis to conclude the 1992 season, and A-State also tied the school records for home runs in a game (8) and hits (26). The eight homers tied the mark set at UALR on April 10, 2005 and the Red Wolves entered the game with just seven on the year. The 26 hits tied a record set in 1994 versus Little Rock. Additionally, the team drove in 29 of those runs to break the record of 26 in the 1992 game against Memphis.

• On a national scale the eight home runs are tied for the second most in a NCAA Division I game this season, while the 31 runs are tied for the fourth most in the nation this year. Arkansas State tallied 54 total bases in the game for the second most in school history and the second most in the country so far in 2018. 10 different players picked up hits in the contest, while nine drove in runs.
• Nate Alberius limited the Warhawks to just three runs (all earned) on six hits with three walks and four strikeouts. All three runs came around to score in the bottom of the fourth. Payton Lannon tossed an inning in relief, while Chase Nixallowed two runs over the final two frames to finish the game.
• Grant Hawkins drove in a career-high four runs and tied a career high with four hits, while Jeremy Brown tied his career high with four RBI. Kyle MacDonald tied a career best with four hits, drove in three runs, and hit his third homer of theseason. Casey Vaughan hit his first home run of the season and scored five runs to account for the most scored by anA-State player this season. Cullen Ray connected for a home run in the game and drove in four, while fellow freshman Jaylon Deshazier hit his third home run of the season.
• A-State is 38-31 all-time against ULM. The series began in 1973 with the Warhawks taking both games from Arkansas State to open the season by scores of 7-2 and 10-0. The two squads played again in 1974 with A-State winning both contests 2-0 and 8-2.
• After the four initial meetings in the series, the teams didn’t play again until the 1983 season when ULM took five out of six games. AState posted a 3-2 record against ULM in 1987 for its first winning record against the team since 1974 andalso swept two games each season in 1994 and 1997.
• Since then the two teams have been in the Sun Belt Conference (ULM joined in 2007), A-State has won eight of the 11 season series and holds a 22-12 advantage with only one matchup coming during the SBC Tournament. That matchupwas the 2012 final in which ULM won by a score of 4-2.
• A-State head coach Tommy Raffo is 20-11 against the Warhawks in his career. The team went 2-1 in his first season as head coach in 2009 in Monroe. A-State won the first two games 14-4 and then 6-4 in 11 innings before falling in the finale10-8 in 10 innings. A-State has swept ULM three times (2010, 2014, 2016) during Raffo’s tenure and has only lost the season series twice in nine chances (2012 and 2015).
• In 2017, the Red Wolves won two of three games against the Warhawks in Jonesboro after ULM made the trip to Jonesboro for the second straight season. The two teams were forced to play a doubleheader on Saturday with A-Statedropping the first game 5-3 before a 12-6 win in the second contest. Bryan Ayers took the loss in the first game with GrantHawkins and Joe Schrimpf both swatting home runs in the game. Hawkins followed with another homer in the second game and drove in three runs while Jeremy Brown drove in four. Tyler Zuber picked up the win on the mound out of thebullpen. A-State won the series finale 8-3 after a two-run single by Garrett Rucker broke a 3-3 tie in the seventh. TannerKirby picked up the win with three shutout innings out of the bullpen.

Original article source: http://www.astateredwolves.com//ViewArticle.dbml?DB_OEM_ID=7200&ATCLID=211801528 | Article may or may not reflect the views of KLEK 102.5 FM or The Voice of Arkansas Minority Advocacy Council