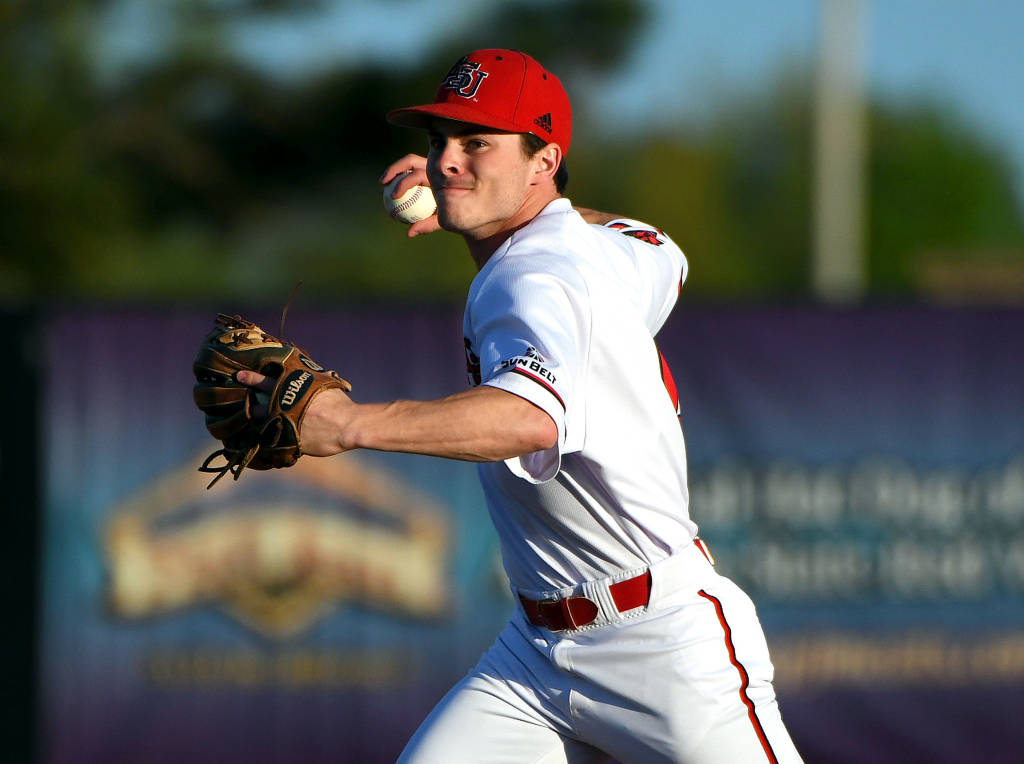 • A-State leads the all-time series with Texas State by a count of 13-6 in a series that began in 2000. The Bobcats won thefirst game of the series by a score of 11-8 at a neutral site in Dallas, Texas, as part of the Dallas Baptist University Classic.• The two teams didn’t meet again until 2009 when the Red Wolves defeated the Bobcats 4-3 in 10 innings to begin the season at the UT Arlington Invitational in Arlington, Texas. Josh DeMoney singled home Cody Pace to give the Red Wolves the win in Tommy Raffo’s coaching debut. However, Texas State avenged its loss just two days later by a score of 3-2.

• A-State head coach Tommy Raffo is 11-4 against Texas State all-time with all but the first two games coming since the2014 season when the Bobcats joined the Sun Belt Conference. The Red Wolves took two-ofthree over Texas State in2014 in Jonesboro. A-State lost the first game 5-4 in 12 innings, but bounced back to win the final two games of the set 5-4 and 4-1. In 2015 the Red Wolves traveled to San Marcos for the first time and were able to sweep Texas State by scoresof 8-5, 12-10, and 11-10.

• The Bobcats came to Jonesboro in 2016 and lost the series to Arkansas State 2-1 after A-State won the first two games 6-1 and 9-6. However,mthe Bobcats were able to salvage the finale 12-3. The two met in them2016 SBC Tournament atBobcat Ballpark in San Marcos, but the Red Wolves were victorious by a score of 4-3 and ended Texas State’s season.Tanner Kirby went the final 6.1 innings out of the bullpen and earned the win after allowing one run on three hits with fivestrikeouts against two walks.

• The 2017 season saw A-State travel to San Marcos where the teams played a doubleheader to begin the series. The Red Wolves won game one 13-7 before losing 16-7 in the nightcap. A-State was able to take the series with a hard-fought 8-7 win the next day. Five Red Wolves hit .400 or better in the three-game set with Garrett Rucker leading the way with a .462 mark. Joe Schrimpf, Drew Tipton, Jeremy Brown, and Derek Birginske were the other four with Tipton hitting two home runs. Bo Ritter and Bryan Ayers didn’t allow a run in 3.1 innings and two innings, respectively, on the mound. Luke Sherley hit .417 for Texas State during the series, while Jonathan Ortega hit two homers

• Last season, the Red Wolves took two of three from the Bobcats. In the first matchup, Arkansas State got a quality start from Bradey Welsh and took advantage of a Texas State mistake with a five-run fifth inning in a 6-1 victory over the Bob- cats. The Red Wolves dropped the second game 10-3. Vaughan led the Red Wolves with a 3-for-3 effort at the plate with aRBI, while Welch had a hit and two RBIs. MacDonald and Jacob Jablonski also finished with two hits each to round out theday for A-State. Almendarez led the Bobcats with two hits and three RBI at the plate, while Nicholas Fraze earned the win for the visitors after he allowed three runs on 10 hits with eight strikeouts against three walks. Braden Pearson picked up a three-inning save.

• In the series finale, the Red Wolves defeated the Bobcats 2-1. Holt, a true freshman, started the contest and went 4.1. MacDonald was the only A-State player with two hits, while Blake Wynn picked up his first career hit in second start of the season. Ortega led the visitors with two hits as both teams each had five hits apiece. Engle took the loss for Texas Stateon the mound despite allowing just two runs on three hits with four strikeouts against two walks.

• Texas State enters the weekend 24-13 overall and 9-6 in the Sun Belt Confernce, with the most recent conference win coming form Georgia Southern, where the Bobcats took two of three in Statesboro. The bobcats’ most recent non-con win cam on Tuesday when Texas State defeated Houston Baptist 17-8 at Bobcat Stadium.
• Only once has the bobcats won at home over A-State, which came on Mar. 31, 2017 by the scpre of 16-7 in the second game of a double header.

Original article source: http://www.astateredwolves.com//ViewArticle.dbml?DB_OEM_ID=7200&ATCLID=211800359 | Article may or may not reflect the views of KLEK 102.5 FM or The Voice of Arkansas Minority Advocacy Council