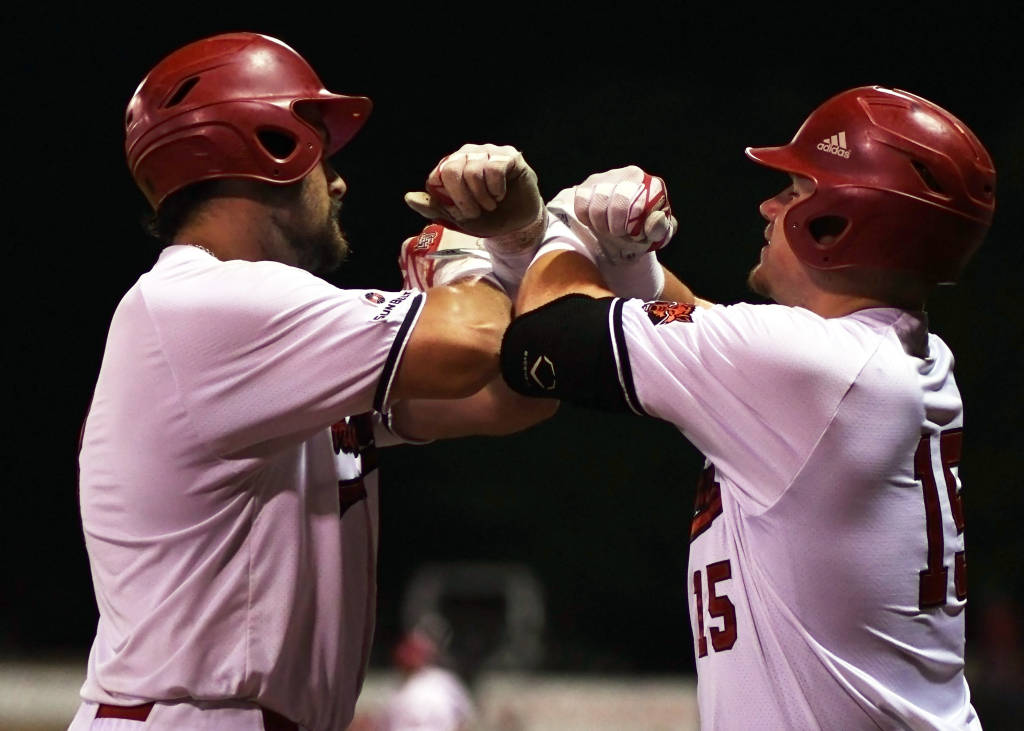 • A-State trails the all-time series with the Chanticleers 0-6 after getting swept by Coastal in Conway, S.C., in 2017 and at Tomlinson Stadium in 2017. The Red Wolves dropped the opener by a score of 5-0 after Alex Cunningham hurled a complete-game, one-hit shutout. Tobias Johnson got the team’sonly hit. A-Stat dropped game two 11-6 despite four hits from Alex Howard, including his first career home run, and three hits by Grant Hawkins. The Red Wolves fell in the finale 6-1.

• Arkansas State has only faced one other team from South Carolina with a 1995 matchup versus Clemson in Arlington, Texas at the UTA Invitational. A-State lost the game 7-2.
• Coastal Carolina enters the weekend 18-6-1 overall and 5-1 in Sun Belt action. CCU recently split ahome and home with UNC Wilmington by dropping the first contest in Wilmington 4-5 before bounc- ing back Wednesday to win 9-2 at Spring Brooks Stadium.
• Wednesday, Matt Eardensohn (2.0 IP, 3 K) and Dylan Gentry (1.0 IP, 1 ER, 3 BB) kept the Chants in the game over the next three-plus innings out of the bullpen, as runs were hard to come by.
• Freshman Alaska Abney (1-2), who had a win and a save over the weekend versus Troy, was saddled with the loss as he gave up an unearned run on three hits and two strikeouts in 1.1 innings of work after pitching out of trouble in the eighth.

• In 2018, Both pitching staffs set school records in walks with A-State walking 18 and the Chan- ticleers issuing 12. The 30 combined walks were the most in a NCAA Division I game since Rice and Texas Southern on Feb. 22, 1995, and also tied for the second most in a single game. The 40 combined runs were the second most in an A-State game since the team defeated Memphis 28-13 in 1992.

• Patrick Orlando earned the win for Coastal Carolina with 2.1 innings out of the bullpen, while Trev-or Damron earned a save by pitching the final four innings. Woodall, Jr., had three hits for the Chants and knocked in six runs along with five runs scored. Kyle Skeels registered four hits, three RBI, andscored three runs.

• A-State starter Coulton Lee lasted three innings and began the fourth, but couldn’t get an out as heallowed seven runs (all earned) with five walks and two strikeouts. The Red Wolves would go on to use six more pitchers, including Blake Wynn with his first career appearance on the mound. A nativeof Star City, Ark., Wynn put the only zero on the board with a perfect ninth inning.

Original article source: http://www.astateredwolves.com//ViewArticle.dbml?DB_OEM_ID=7200&ATCLID=211797646 | Article may or may not reflect the views of KLEK 102.5 FM or The Voice of Arkansas Minority Advocacy Council