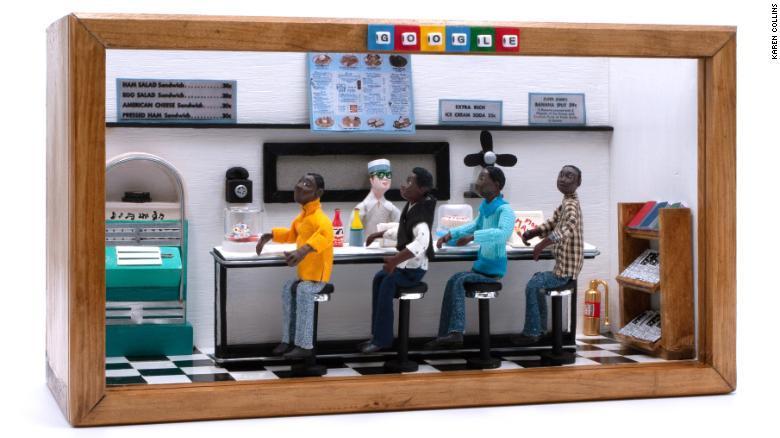 Sixty years ago, four African American college students sat down quietly at a whites-only Woolworth’s lunch counter in Greensboro, North Carolina. They received no service, only requests to leave, but they kept waiting for hours. And the next day, they returned and waited again. Within three days of their protest, more than 300 students joined the young people who became known as the “Greensboro Four” in their sit-in.

The Four’s actions set off a wave of similar demonstrations throughout the South, drawing national attention to the fight against Jim Crow-era segregation and marking a turning point in the civil rights movement. Today’s Google Doodle commemorates these brave activists to kick off Black History Month.

According to CNN.com, the doodle is actually a photo of a diorama by Compton-based artist Karen Collins, who is also the founder of the African American Miniature Museum. “Organized by four Black college freshmen, the protest against segregation served as a catalyst for similar demonstrations throughout the nation,” Collins wrote in a blog post.

Collins has been creating dioramas that capture moments in black history for 24 years through the African American Miniature Museum, a project she started with her husband Eddie Lewis.

Collins had always wanted a dollhouse as a little girl, but as the daughter of a single mom, her family couldn’t afford it, she wrote in a blog post. When she bought her first dollhouse 40-some years later, she discovered her passion for using dioramas to tell stories.

That passion gained a new meaning when her son was incarcerated, she wrote. In the midst of her pain and anguish, she started the African American Miniature Museum. The museum began as a mobile project in the 1990s, when Collins displayed her work in venues like schools, libraries and churches as a way of contextualizing black history for children.

Today, she continues to operate the museum from home. Collins says on her website she hopes to have a permanent location one day for the more than 50 dioramas she has created, which depict events from the Middle Passage to the Black Lives Matter protests. Below are some examples of her work from an exhibit of her collection Collins had at the Los Angeles Public Library in 2018:

“For me, the museum was a way to turn the negativity into something positive and share the stories of our ancestors’ strength and perseverance through hardship,” Collins wrote in a blog post.

“I want young people to learn about those that came before them who sacrificed to help make the lives they live today possible. Most importantly, I want them to see that we each have the power to make it through difficult times to thrive and hopefully make things better for those who come after us.”

Original article source: https://goodblacknews.org/2020/02/01/african-american-miniature-museum-founder-and-artist-karen-collins-hasgreensboro-four-piece-highlighted-by-google-to-kick-off-black-history-month/ | Article may or may not reflect the views of KLEK 102.5 FM or The Voice of Arkansas Minority Advocacy Council