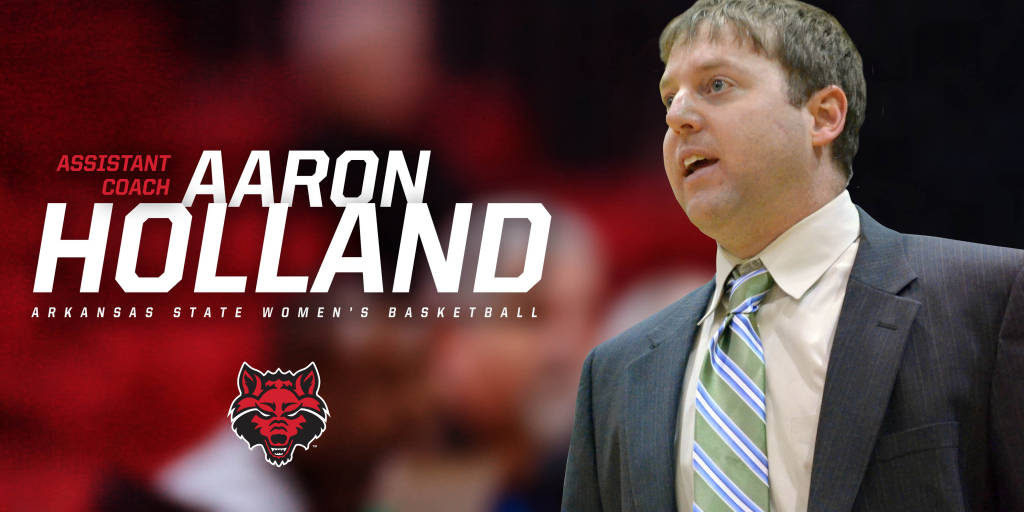 “Aaron has made a name for himself coming up through the ranks as a grinder,” said Daniel. “He will be heavily involved in recruiting, using his connections all over the southeast. He is a native of Jonesboro, went to school here at A-State and he will wear our brand with pride.”

Holland returns to his alma mater after two seasons as an assistant coach at Lipscomb. While at Lipscomb, Holland was the recruiting coordinator and helped develop two Atlantic Sun Conference all-freshmen team members and the 2018 A-Sun Player of the Year Loren Cagle. The 2017-18 season saw the Bisons play in their first A-Sun Conference Championship semifinal since 2008.

“I’m so excited to return to my alma mater and work for coach Daniel,” said Holland. “I’ve long respected the work that Matt has done and look forward to working with him on a day-to-day basis as part of the Red Wolves family here in my hometown.”

Prior to his time at Lipscomb, Holland was an assistant coach for one season at Florida State College at Jacksonville. He coached first team WBCA NJCAA All-American De’Angela Mathis and had three players selected as First or Second Team All-Conference.

Holland spent three years with Insider Exposure Florida Girls Basketball as a scout, editor and coach. In that time, he was responsible for evaluating talent of girls’ basketball players to determine the skill level for collegiate programs. Holland began his coaching career as head coach at Motlow State Community College.

Holland earned his Bachelor’s Degree in Sports Management in 2006 and a Master’s Degree in Business Technology in 2011, both from Arkansas State. He was a graduate assistant for men’s basketball handling all team video needs from 2009-11.

Original article source: http://www.astateredwolves.com//ViewArticle.dbml?DB_OEM_ID=7200&ATCLID=211799344 | Article may or may not reflect the views of KLEK 102.5 FM or The Voice of Arkansas Minority Advocacy Council