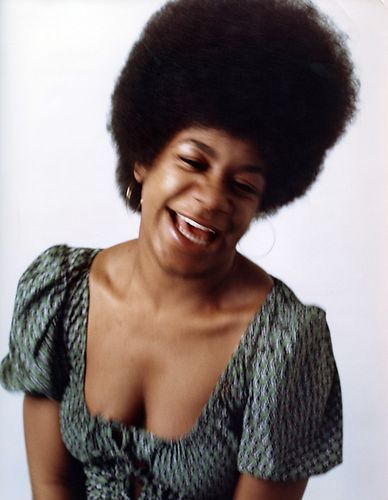 As part of Good Black News’ celebration of African-American Music Appreciation Month (#AAMAM), we are taking some time to honor quality artists whose music has nevertheless remained unappreciated.  Last week, we brought you a playlist from Ronnie Dyson.

This week we’d like to introduce/re-introduce you to Merry Clayton.

Back in March 2014, as she was experiencing 50 years in the music business, legendary session singer Merry Clayton got one more chance at stardom when the documentary 20 Feet From Stardom, about the world’s most renowned backup singers, won the Best Documentary Oscar.

The doc brought renewed attention to performers such as Lisa Fischer, Judith Hill, Gloria Jones, and Clayton – whose voices you’ve undoubtedly heard, but whose names are a little less than familiar.

In the early ‘60s, Merry (who got her name because she was born on Christmas day) launched into a music career as a young teen, cutting a few one-off soul singles, and singing duet “Who Can I Count On?” with then 26 year-old pop hitmaker Bobby Darin when she was just a 14 year-old girl with a commanding voice.

By the late ‘60s, Merry Clayton’s role as a star backup singer hit its stride on The Rolling Stones’ “Gimme Shelter” opposite Mick Jagger.  Her cries of “Rape, Murder/It’s just a shot away” are known to any classic rock fan. The story goes that she got the random session call late at night from one of the song’s producers during an all-night mixing session – and showed up in curlers, heavily pregnant, belting out the iconic vocals in just a few takes before heading back home (where she subsequently suffered a miscarriage).

Her prominent rock backup turns earned the attention of rock music producer/impresario Lou Adler, who signed her to his Ode Records label (most famous for Carole King’s Tapestry LP).  In 1972, she further cemented her rock bonafides by appearing as The Acid Queen in the first London stage production of The Who’s rock opera, Tommy.

The very enjoyable 20 Feet (you can check it out on Netflix right now) essentially argued that if only these women had gotten the chance, they could have been big stars.

But I would suggest that the story is a little more nuanced with Merry Clayton – who actually did release five albums (four available on Spotify) in her own name over the course of her career – more chances than most unknown artists would get today.

In Clayton’s case, she predominantly operated in a pioneering space of Black female-led soulful rock that just never quite broke through at that time – not for her, or anyone.

Similar to the trio Labelle’s early ‘70s releases, Martha Reeves acclaimed 1974 eponymous LP, or the late ‘70s rock covers albums of The Pointer Sisters, Clayton’s releases were quality records that fused what had become by that point a White male genre with powerhouse Black female vocals.

It would be more than three decades before someone like Brittany Howard could front the successful rock group Alabama Shakes – and back in the early ‘70s, there were still very specific roles for Black women in music: choreographed vocal groups (like the post-Diana Supremes, Gladys & her Pips, The Emotions, The Three Degrees), sexy Southern soul bad girls (Millie Jackson, Barbara Mason, Denise LaSalle), or milder TV-friendly pop vocalists (Dionne Warwick, Fifth Dimension, Diana Ross, Nancy Wilson).  And of course, Aretha.

Even a rock-infused R&B act like Ike & Tina Turner was struggling to find hits in the early ‘70s – and still surrounded its rock instrumentation with the ‘60s soul trappings of choreographed backup singers in matching outfits.

If you didn’t fit one of those molds, how was the industry (and the consumer) supposed to figure you out? Ahead of its time, this was music that was intended to bring everyone together, but instead ended up with no radio stations who would play it – it was too soulful (and female) for FM rock radio, and too rock for R&B radio.

Over the course of her first few albums, Clayton’s passionate vocals took on songs from across the rock world, including her own version of “Gimme Shelter,” and songs from Neil Young, Van Morrison, James Taylor, The Doors, The Eagles, and Bob Dylan, as well as her takes of by-then standards such as “Bridge Over Troubled Water” and “A Song For You.”

As her career progressed, she got some notoriety from singing “Keep Your Eye on the Sparrow” – the theme song to the TV cop series Baretta – and began to venture into funkier material, just as the rest of the world was turning away from harder funk and towards lighter disco. Nevertheless, this era for Clayton produced some strong material with noted jazz/R&B producer instrumentalist Roy Ayers (much of which remained unreleased until the 2000s).

Ironically, despite her noted backup career and a solo career trying to break rock boundaries, her biggest solo Spotify hit to date is the bubbly, oh-so-80s generic synth driven song “Yes,” which, by virtue of being part of the soundtrack to Dirty Dancing, ultimately sold millions. While included on our playlist, it is by no means the artistic peak of her pioneering body of work.

Now in her early 70s, her life faced a setback in recent years when a car accident led to the amputation of her legs – and she’s had few credits (backup or lead) since the accident.  But Merry Clayton has given us some excellent music to explore and rediscover today during African-American Music Appreciation Month.  Enjoy!

Original article source: https://goodblacknews.org/2020/06/17/aamam-just-a-shot-away-rediscovering-legendary-session-singer-merry-clayton-listen/ | Article may or may not reflect the views of KLEK 102.5 FM or The Voice of Arkansas Minority Advocacy Council