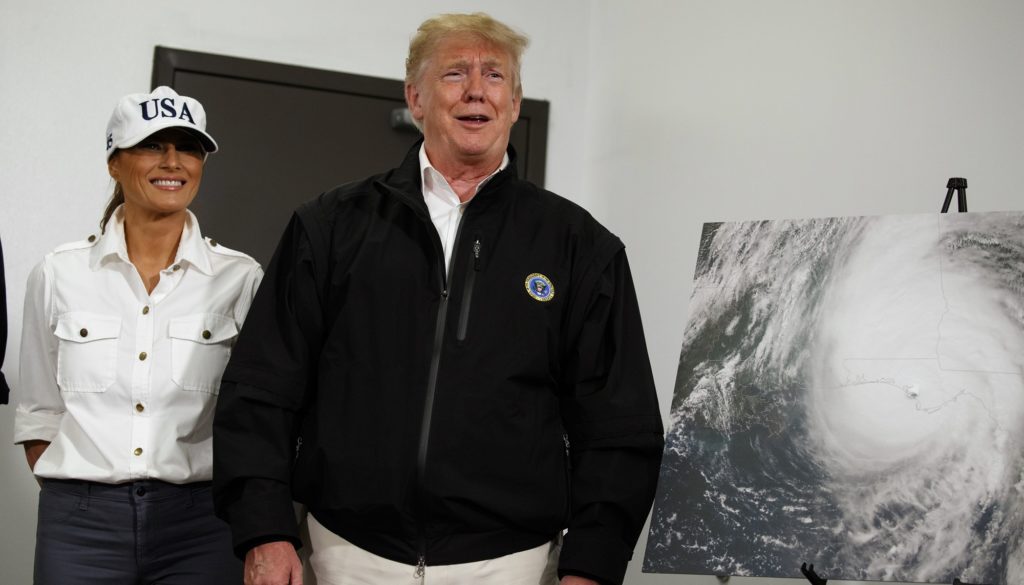 First lady Melania Trump looks on as President Donald Trump reacts to a question about Sen. Elizabeth Warren from a reporter during a briefing with state and local officials on the response to Hurricane Michael, Monday, Oct. 15, 2018, Macon, Ga. (AP Photo/Evan Vucci)

It is ugly on Twitter today between the president and Stormy Daniels, the adult film star who was paid off by Michael Cohen and the president for an alleged affair.

“Federal Judge throws out Stormy Danials lawsuit versus Trump. Trump is entitled to full legal fees.” @FoxNews Great, now I can go after Horseface and her 3rd rate lawyer in the Great State of Texas. She will confirm the letter she signed! She knows nothing about me, a total con!

Ladies and Gentlemen, may I present your president. In addition to his…umm…shortcomings, he has demonstrated his incompetence, hatred of women and lack of self control on Twitter AGAIN! And perhaps a penchant for bestiality. Game on, Tiny. https://t.co/6DpDD5ELtj

You are a disgusting misogynist and an embarrassment to the United States. Bring everything you have, because we are going to demonstrate to the world what a complete shyster and liar you are. How many other women did you cheat on your wife with while you had a baby at home? https://t.co/npOKOEFju6

Below please find a statement just issued regarding Donald Trump’s tweet of this morning. pic.twitter.com/lQM6TCN9fR

Original article source: http://aurn.com/a-stormy-day-on-twitter/ | Article may or may not reflect the views of KLEK 102.5 FM or The Voice of Arkansas Minority Advocacy Council