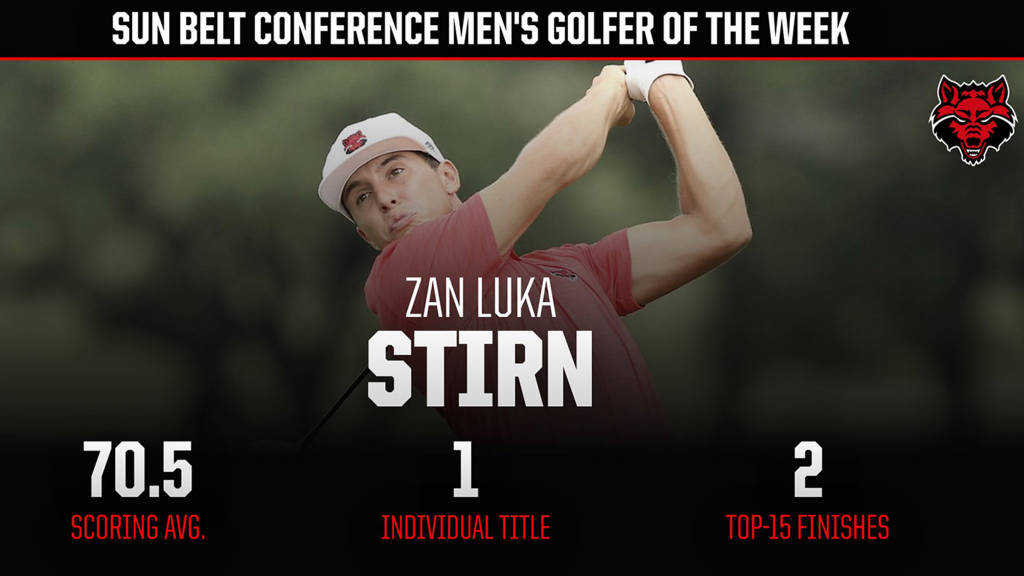 JONESBORO, Ark. (9/20/18) – Arkansas State junior Zan Luka Stirn was named the Sun Belt Conference Men’s Golfer of the Week on Thursday, earning the honor for the third time of his career.

The latest recognition for Stirn comes after he claimed a pair of top-15 finishes, including co-champion honors at the Lone Star Invitational, to help lead the Red Wolves to a team title and runner-up finish in their first two tournaments of the season.

The Kranj, Slovenia, native shot a 4-under 140 (70-70) at the Lone Star Invitational to pace the 84-player field as the Red Wolves finished runner-up out of 15 teams. He captured his second career individual title, also winning the Bob Sitton Invitational as a freshman in 2016-17.

Stirn came back to place tied for 13th with a 2-under 142 (70-72) at the 10th annual Golfweek Conference Challenge, which A-State won with a 23-under 580. The Red Wolves finished ahead of teams such as 21st-ranked UCLA as they became the first team not from a Power 5 conference to win the tournament. He finished the two tournaments with a combined 70.5 stroke average, recording a score under par in three of his four rounds played.

Texas A&M is currently ranked fourth in the nation in the Bushnell Golfweek Division I Coaches Poll, while New Mexico, North Florida, SMU and Tennessee are all receiving votes.

Original article source: http://www.astateredwolves.com//ViewArticle.dbml?DB_OEM_ID=7200&ATCLID=211772812 | Article may or may not reflect the views of KLEK 102.5 FM or The Voice of Arkansas Minority Advocacy Council