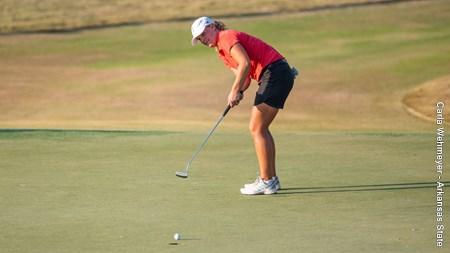 A-State’s Olivia Schmidt and Elise Schultz are in a three-way tie for first going into Tuesday, matching Troy’s ShaeBug Scarberry with an 8-under par 136 through 36 holes. Schmidt was the lone player to finish below 70 in both rounds on the day, turning in a 5-under par 67 in the first 18 before shooting 3-under 69 to end the day. Her first-round score is tied for fourth-best in school history.

Schultz led A-State’s “B” team with two rounds below par, starting with a 2-under 70 in the first round before registering a season-best 18-hole score of 6-under 66 in the second round.  She helped her squad finish the first day tied for fourth as a team, while Sydni Leung aided with a 2-under par total of 142 to end the day tied for 14th.

Behind Schmidt, Morgan Beaulieu is tied for 19th with a even-par 144, while Charlotte Menager, Kayla Burke and Olivia Coit are tied for 30th with a 2-over par 146. Casey Sommer recorded a two-round total of 5-over 149 to sit tied for 47th, while Thitapha Iamtragul rounds out the Scarlet and Black tied for 68th with a score of 9-over par 153.

Continued here:
A-State’s Schmidt, Schultz Tied for Lead in Day One of Lady Red Wolves Classic. Article may or may not reflect the views of KLEK 102.5 FM or The Voice of Arkansas Minority Advocacy Council