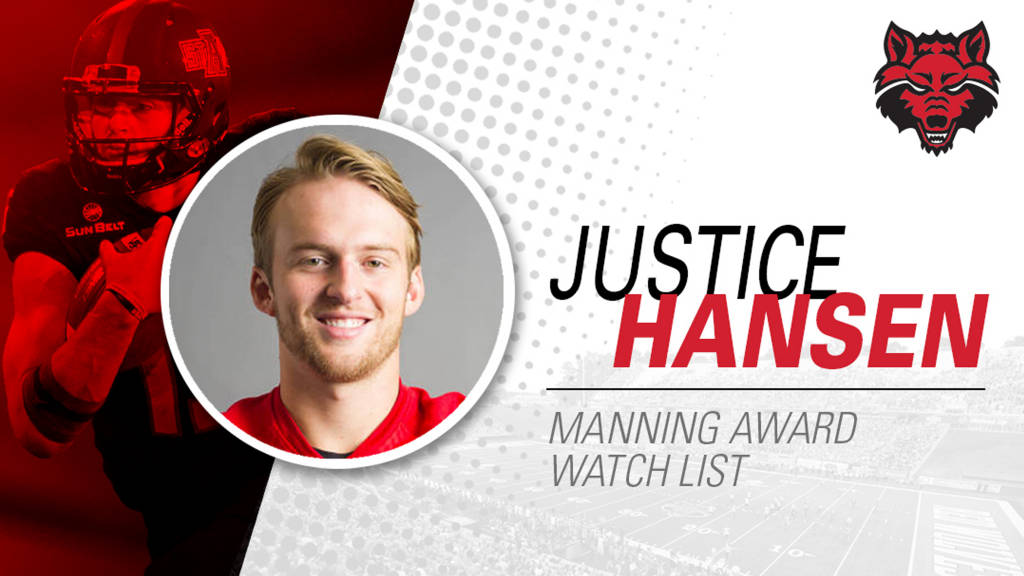 JONESBORO, Ark. (8/16/18) – The preseason Sun Belt Conference Offensive Player of the Year, Arkansas State senior quarterback Justice Hansen was one of 30 players across the nation named Thursday to the 2018 Manning Award Watch List.

The Manning Award was created by the Allstate Sugar Bowl in honor of the college football accomplishments of Archie, Peyton and Eli Manning. It is the only quarterback award that includes the candidates’ bowl performance in its balloting. The winner will be selected by a voting panel, which includes national mead and each of the Mannings, after the bowls.

Hansen is the fourth all-time A-State player to find a spot on the Manning Award Watch List, joining Fredi Knighten (2015), Ryan Aplin (2012) and Corey Leonard (2009). The four quarterbacks all rank among the top five players in school history for both career yards total offense and passing touchdowns.

An Edmond, Okla., native, Hansen has been named to five other preseason watch lists as well, including those for the Johnny Unitas Golden Arm Award, Walter Camp Award, Wuerffel Trophy, Davey O’Brien Award and Maxwell Award. He enters the 2018 season ranked among the top 10 active players in the nation in six statistical categories, including career passing yards per game (267.4), total offense per game (289.6), touchdown passes (56), passing yards (6,686), total offense (7,239 yards), and pass efficiency (145.15).

Hansen, who has already earned his bachelor’s degree from Arkansas State University and is currently pursuing his master’s degree, completed the 2017 season as the Sun Belt Conference Offensive Player of the Year after breaking the single-season school records for total offense (4,389 yards), completions (305), passing yards (3,967 yards) and passing touchdowns (37).

The A-State football team is currently in the second week of its fall camp and is set to open its 2018 season Sept. 1 at 6:00 p.m. at Centennial Bank Stadium against Southeast Missouri State. Season tickets can be purchased through the A-State Ticket Office, located at First National Bank Arena’s lower red entrance, in person, by phone at 870-972-2781 or online by visiting AStateRedWolves.com/Tickets.

Original article source: http://www.astateredwolves.com//ViewArticle.dbml?DB_OEM_ID=7200&ATCLID=211768435 | Article may or may not reflect the views of KLEK 102.5 FM or The Voice of Arkansas Minority Advocacy Council